Old Friends:
A few weeks ago, I got together with two of my closest friends Mike Davis and Jesse Glenn. I have known Jesse since I was 11, and Mike since I was 13. They stood in my wedding, they are like brothers to me. It had been far too long since we were all sitting around a table, so we planned a game day. We played Risk, Settlers of Cattan, and Crononauts. I bring this up because I know how instrumental they were in getting Mouse Guard's ball rolling.

All three of us are artists and we spent all our spare time together playing role playing games and drawing and making up comics. Through the years we created things together and we created things alone that we only asked for critiques on. Mouse Guard I did alone, but added my dear friends as characters and asked for their opinions on my mousey world right from it's creation. Some of the ideas we never got around to really developing are ones that I still like to dust off and take a look back on. This is a long way of saying that I want to regularly some of those projects from ---- 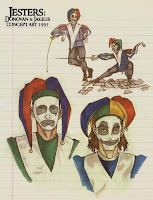 The Vault: Jesters
This time around, I took a look though the folder marked 'Jesters'. Jesters spawned from Halloween costumes Jesse made for he and I. We were invited to a party and needed quick costumes, we also knew we could get in 'free' if we dressed as some sort of clown and offered to serve drinks and tend the front door. After that party I thought we had the start of some fun characters. I named them Donovan and Jakeus (D for David/J for Jesse). The concept was to have two medieval adventurers/spies who were entrusted to know all the kings dealings and could easily get into other kingdoms under the disguise of being fools or jesters. My concepts were taken right from the costumes and our own likenesses.

Later Jesse started writing a very funny/witty script where the Jesters discover a plot against the king but are thrown in jail for arguing in public in a bar before they can do anything about it. My artwork was being heavily influenced by my admiration for Mike Mignola's work and Jesse never finished the script. I still think the concept has potential, but for now will remain in the vault.

Tutorial:
A friend asked me to look at a scan that was sent to him to figure out why it looked odd. Turns out the person who scanned the artwork scanned it as a bitmap. Now I know a lot of tutorials and pros will tell you to only scan your linework for comics as a bitmap. For Mouse Guard I scan as greyscale and here's why. On a bitmap setting when a scanner is 'looking' at the artwork and it finds a 'grey area' it has to interpret it as either black or white. There are several methods it can use (usually settings you can adjust or set before you scan). I put together an example of a greyscale gradation and how the various settings effect it.


-Threshold: maps out large areas as either black or white. once the tone gets to light it's just pure white

-Pattern Dither: will try and stipple out a black and white uniform pattern in the pixels to simulate the gradation.

-Diffusion Dither: same as pattern dither, but in a random distribution rather than uniform

-Halftone Screen: uses a patterned shape that increases or decreases in size depending on the value of the tone it interprets.

while each of these have their uses [Threshold will simulate how an old copier would have made an image, Diffusion dither works well for sending photographs by fax if you have to, halfone screen can be used stylistically (look a McDonald's drink cup)] I prefer to scan in greyscale and the on a case-by-case basis adjust the levels (either with the levels tool or by dodging and burning in specific areas) myself. 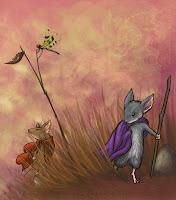 Fan Art:
I was directed to this one by a friend. It's from an artist on Deviantart.com who goes by PlainYellowFox. I really like the attitude on both mice as well as the colors in the background!Nice Job PYF.
Posted by DPetersen at 2:52 AM