With my biggest convention starting tomorrow, I wanted to share all the info I have about where I'll be, items I'll have available, and what else I'll be doing at the convention. Lots to cover, so here we go:

Where:
Most of the five days of the show I'll be in Artist Alley GG-09. I have scheduled signing times at the Archaia booth (#2229) every day (see their schedule), but I am happy to sign anything of yours that I've worked on at either location. I'll do quick head sketches at either place so long as there isn't too much of a line. If I'm not at either of those locations, I'm most likely at a panel (see below) or taking a bathroom break. 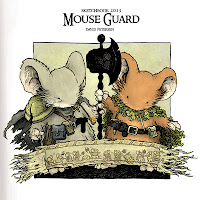 2013 Mouse Guard Sketchbook:
A collection of commissions from the past year specifically colored for this collection (plus a few other illustrations) 24 pages, signed and numbered (500) $20. After SDCC, I'll take remaining books to my upcoming conventions, and put them in my online store once I'm back from SDCC. (and don't worry, I never sell out of them at SDCC....even if an ebay seller claims I did).

With the red banner shirts almost entirely gone, and with the release of the Black Axe hardcover, it was time for a new shirt! Celanawe with the Black Axe is surrounded by illustrated depictions of the five ancient serpents who once surrounded all that was. The printing will be black and grey ink on a heather-grey shirt. At SDCC we will have Mens & Ladies sizes and make the shirts available in the online store soon after we return home.

SDCC exclusive Black Axe:
Skelton Crew released a special finish version of the Black Axe in an antique gold. These will be available at both my table and the Archaia booth for $30. I believe Skelton Crew will make any remaining available through their website after SDCC.
Panels:
I'll be on three panels over the course of this weekend. Here are their descriptions, locations, and times.
MTV: Creator Pitch LIVE

MTV Comics executive editor Tom Akel conducts a live pitch competition between three of the top creators in the business. Last year's winner David Petersen (Mouse Guard) will be back to defend his crown against two new challengers. Creators are presented with a topic just a few weeks out from the convention and then develop original pitches that you, the fans, vote on to determine the winner!
Friday July 19, 2013 12:00pm - 1:00pm
Room 28DE

How and Why to Write a Great All-Ages Comic Book
Some of the biggest "kids" in comics discuss the current state of the industry and what steps are necessary for comics to secure a place in the hearts and minds of the next generation. What are the benefits and challenges involved in writing all-ages comics? How are licensed comics playing a role in our future? How might webcomics, digital publishing, emerging technologies, and self-publishing change the landscape? And how can we ensure that more young readers today become readers for life? Panelists include Andy Runton (Owly), David Petersen (Mouse Guard), Katie Cook (My Little Pony), Mike Kunkel (Herobear and the Kid), Neo Edmund (Jurassic Strike Force 5), Otis Frampton (Oddly Normal), Royden Lepp (Rust), and Jimmy Gownley (creator of Amelia Rules!). Moderated by all-ages comics writer and editor Joe LeFavi (Fraggle Rock).
Sunday July 21, 2013 11:00am - 12:00pm
Room 28DE

Archaia Entertainment: The Year of Mouse GuardAfter its debut, Mouse Guard has become one of the most popular, beloved, and honored stories in comics, and in 2013, creator David Petersen is not slowing down! This year will see the release of the Mouse Guard Vol. 3: The Black Axe hardcover and the debut of the four-issue Mouse Guard: Legends of the Guard Vol. 2 miniseries (followed by the release of a hardcover that collects them). In addition, from Skelton Crew comes collectible replica Black Axes, the first in a line of Mouse Guard replica weapons! Moderated by Mel Caylo (Archaia's marketing manager), join the Eisner Award-winning Petersen and guests, including Jeremy Bastian, Israel Skelton*, and more to be announced as they give you a behind-the-scenes look at the making of all this Mouse Guard goodness, preview art from upcoming releases, and answer everything you wanted to know about Mouse Guard! Every attendee will receive a Comic-Con exclusive print of an original David Petersen drawing. Plus, one lucky audience member will win a free copy of the limited Mouse Guard: Winter 1152 Black and White Edition!

Here's another view at last week's Watercolor piece that I offered for sale. First up was a giant with a cottage on his head. I was thinking it would be fun to show a giant character using something we think of as 'big' as a small piece of attire. I think as I was painting it I realized there is a bit of Terry Gilliam/Time Bandit homage here...but a cottage instead of a ship.

The other piece I drew in the lobby of the hotel at the Albuquerque Comic Expo. I was looking at my pad of bristol that I did the art for and thought it might be fun to re-visit a gentleman Grasshopper. To make this more than just a re-dressing, I opted for him to wear no clothing and just use body language and the tea & saucer props to convey him being a gentleman.  Tomorrow (even though I'm in San Diego for Comic Con) I'll post two paintings in my online store. Watch my twitter @mouseguard for when they go live