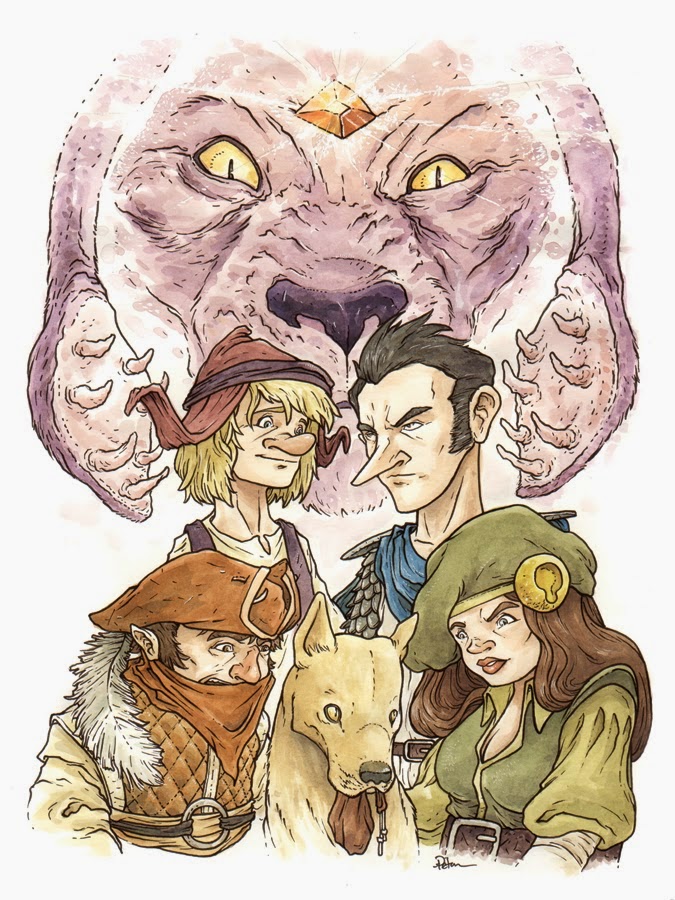 I'm a big fan of Scott Kurz & Co.'s Table Titans web comic. Back in May, I did a piece of fan art purely because I enjoyed discovering the series. Well, the folks over at Table Titans are putting together their first printed collection and they wanted to use my past piece as a pin-up...but the versions of the cast I drew is from what will-be Volume 2. So I offered to not only let them use that piece when they were ready for Volume 2, but also to do a new piece for Volume 1.

Table Titans is a comic about playing Dungeons & Dragons...but it's more than that, it's about a group of friends co-authoring a fantasy adventure together through the mechanics of an RPG system. We get to see the players interact, talk about their choices for their characters as well as seeing the fantasy story cinematically come to life. For this week's blogpost I'll show the process of making this new piece. 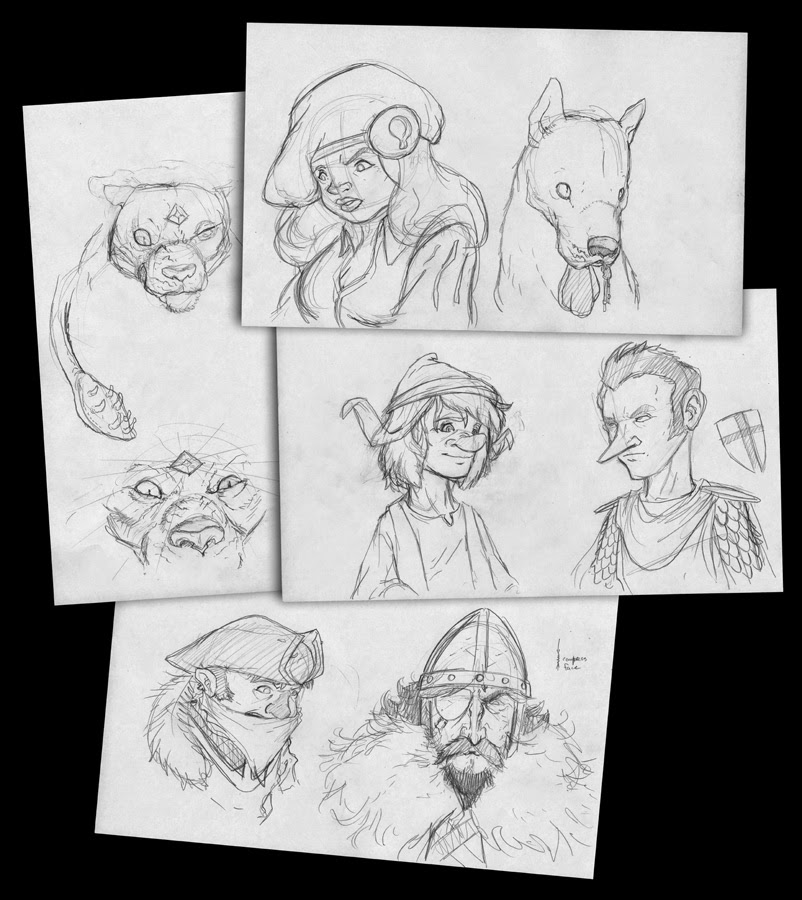 The roughs started out like the last piece, portraits of the characters in-game. In volume 1, the players are assigned pre-made characters, and so the costumes and roles are different than the piece I already had done. Darby's character Draziw the mage was just starting out and didn't have his robes and beard. Val, normally a barbarian was crushed to learn she'd be playing a bard. For the sketches I also drew some elements from the story to try and fit in like the displacer beast, the Caraway "eyepatch" the guardsman, and their adopted pet blink dog pup. I sketched these out on a few sheets of legal sized copy paper. 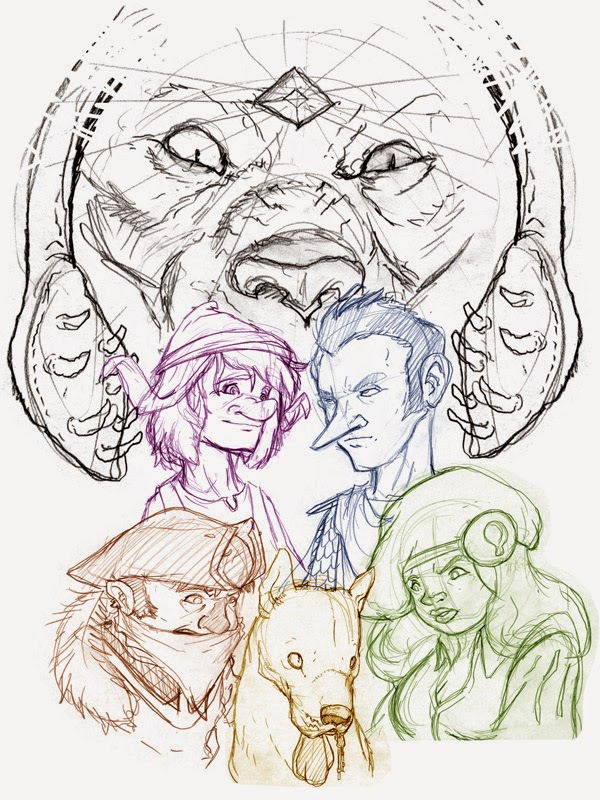 I then scanned those sheets of sketches and started trying to arrange them into a composition I liked inside the format of the Volume 1 book page measurements. I tinted each character to help me distinguish them and make better sense of the layout. In this step I found that I had to lose Caraway, but my idea for the displacer beast to be a stylized looming set of eys, nose & jewel with the tentacles framing the composition was achived by playing with scale, rotation and mirroring of my sketches.

I printed this layout composite and then taped it to the back of a sheet of Strathmore 300 series bristol. In a quick time on the lightbox I was able to copy the linework lightly in pencil so I could begin watercoloring the final artwork. I used a travel tray of Sakura watercolors (the 18 cake set) and slowly built up the layers of color (starting with the lightest tones first and working the darker areas with each revisit as areas dried). Once I had the painting where I wanted it, I went back in with Copic multiliners to ink the linework and add a bit of texture and detail. The last touch was to use a white gel pen and white correction fluid to add some texture and lighting detail over top of the watercolor and pen. 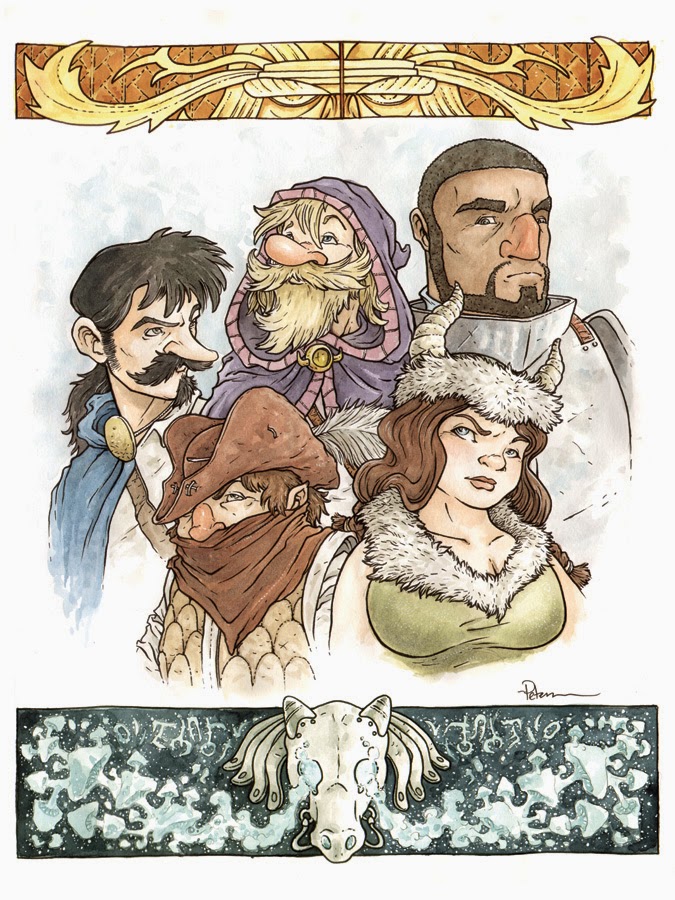 BONUS! After finding out the page format of these volumes, I went back and added a few story element borders to my original Table Titans piece so that if Scott & crew would like to use it in their eventual physical release of Volume 2, my art would fit the page dimensions properly.

The borders were done the same way as the pieces: sketch, digital manipulation, printout, lightbox pencils, watercolor, and then ink.

Both high-res files are in the hards of the Table Titans crew and I look forward to seeing them release these great stories physically...but in the meantime you can read them all online for free at www.tabletitans.com