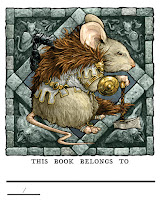 Every year, for the last four years, I've released a new Mouse Guard bookplate. (You can look over the past years here: 2012, 2013, 2014, & 2015). I started this tradition because fans approaching my table at a convention would be disappointed they didn't have their Mouse Guard books with them for me to sign. By making a unique bookplate every year, I not only make a fun mini-print, but since they are signed, a fan can paste one into their book when they return home and have a signed book.

This week's blogpost is going to be all about the process of creating the 2016 bookplate you see on the left. 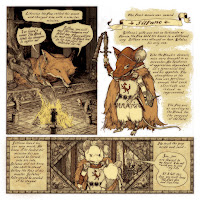 When doing a new bookplate I need to think of two important things: The artistic technique and the subject. For the subject I decided to pay homage to Jeremy Bastian's story from Mouse Guard: Legends of the Guard Volume 1.

His story was the only one I was jealous enough of I felt I needed to weave it into Mouse Guard history not just as a legend, but as partial-history. The mouse Silfano became the subject of my bookplate for this year.

Like I said above I also needed to decide on the technique. With past years bookplates being done as embroidery, mosaic, and stained glass, I settled on a realistic rendered pencil drawing (this was also in prep for my Gotham Academy Story released last week). I drew the mouse Silfano on copy paper and the background design (based on Jeremy's panel border) on a toothier drawing paper. 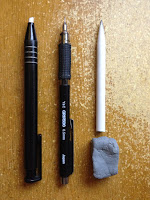 Tool-wise, I used the same stuff I used for Gotham Academy (though technically I drew this first). Knolled here are my (L-R) Stick Eraser, Mechanical Pencil (0.5 w/ HB lead), a Tortillon (fancy word for a smudging stick), and a kneaded eraser. I protected the drawing from getting smudged as I drew, blended, and erased away highlights, by putting down a piece of paper under my hand. 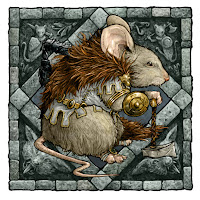 The two drawings were combined after being scanned into Photoshop. To color the image I used the technique of placing layers over the rendered pencil set to layer mode 'color' This keeps the integrity of the value (light/dark) of the drawing, but adds the hue and saturation of what you paint on the 'color' layers to the rendered pencil.

I'll have this bookplate at my 2016 convention appearances, but it is also available in my online shop: http://mouseguard.bigcartel.com/product/mouse-guard-2016-bookplate