For Heroes Con this weekend, I've created two new Mouse Guard 16" x 20" watercolor paintings. Like last year, one of my paintings will be going into the auction, the other will be available for sale at my table Sunday (the morning after the auction) with a price based on the auction results. Below you can see both of the paintings of Gwendolyn and Sadie, but further down, I'll go thorough the process pictures as I created the paintings. 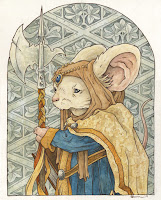 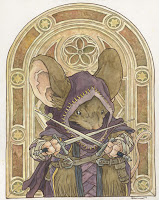 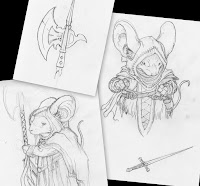 First step was to sketch out my characters on copy paper. I'd known I wanted to do Gwendolyn and Sadie, two prominent female characters from Mouse Guard. For the characters I pushed their costumes a bit beyond their looks in the comic. And over the course of three sheets of paper, I had the elements I needed for the characters themselves. Note I drew the pike-axe separately as I re-designed it, and I only drew one of Sadie's short swords knowing I could digitally re-use it for her other paw. As for the backgrounds...

I decided to reference some architectural photos I took a few years ago in Central Park. I'm bad with my park geography, but I'm pretty sure the diagonal floral motif is near the bridge where the scene from Avengers was filmed. Anyhow, these spoke to me, and I had them on-hand to make a pretty architectural-design inspired background for each painting. 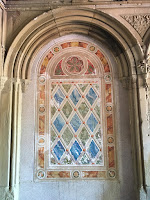 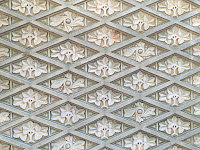 In photoshop, I took my pencil drawings, and the architectural photos and combined them into a satisfying color study of what I wanted my final paintings to resemble. The digital colors helped me pick colors and to pick the color values (light-dark ranges). To give the pieces some cohesion, I used the same arch template formed by Sadie's background to shape the diagonal floral pattern for Gwendolyn's. 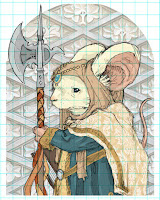 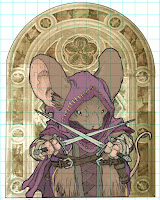 Then I printed out each design at 16" x 20, the same size as the mat board I was ready to paint them on. That meant printing each image in sections and taping the printouts together. This is what the grid on the digital version is for, to help me line-up and re-register the pieces. 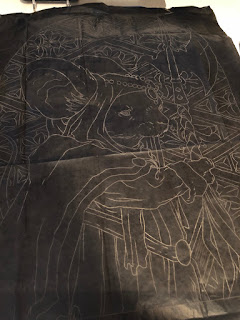 While the process went very smoothly (and below you can see the final transfer of Gwendolyn) I wouldn't ever use graphite paper for this use again. The wax binder that holds the graphite to the paper also transferred over to the matboard and acted as a bit of a resist for the watercolor. It was workable, but there was a thin white halo between the linework and the paint. 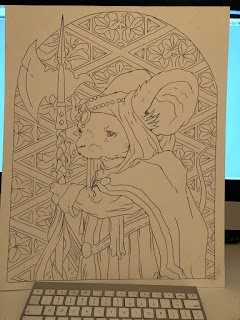 Then it was time to start the painting. I streamed most of that process over on Twitch. Below is a photo I took of my work set-up. A few brushes (mainly one wide flat, and two smaller round), an uncleaned tray of old watercolors (a few tubes were still wet enough to squeeze new dolops from), a water mug, and my painting. I should also mention that while I did my best to document the process, there are several points where I was focused enough on the work, I forgot to stop and take a photo. 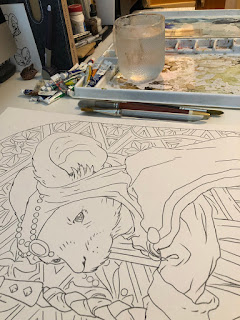 Below is the background of Gwendolyn painted. 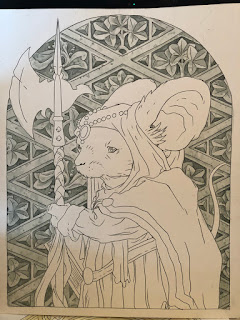 Below is the wash of Sadie's background painted. 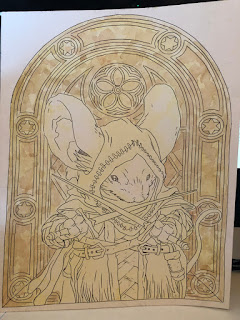 Below I've worked on more of the design, shadows, and colors of Sadie's background. 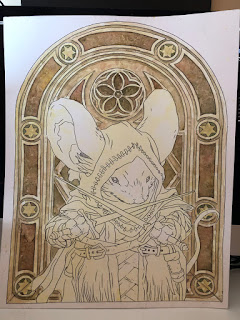 Working on Sadie with the watercolor tray set-up. 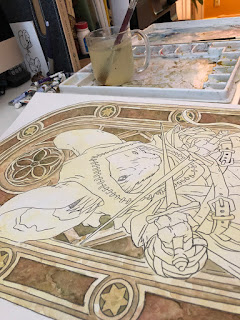 Starting in on the fur and skin tones. 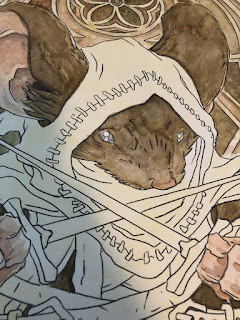 Skipped a few steps of Gwendolyn's fur, skin, and costume colors getting washed in and then built up...at this point I only had her dress, jewelry, book, and the pike-axe handle to work on. 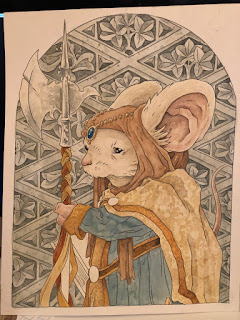 Sadie is nearly done here. Just some color correction and the yellow piping/stitch trim to paint in. 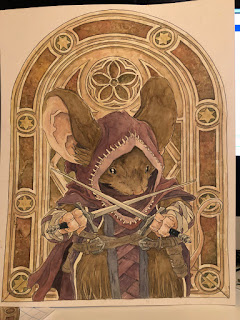 Details of the two at that stage: 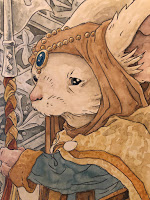 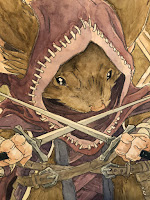 And then the painting portion of each were finished. 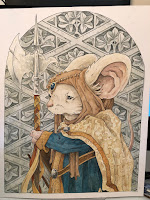 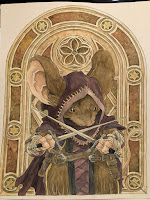 But––I always feel that my work looks better with a strong line. My painting skills aren't quite up to snuff to define forms entirely with color and shape. So, I 'inked' each piece with a brown color pencil. I used a dark brown color pencil instead of ink to soften the linework a bit compared to ink--I didn't want it to look like a coloring book. 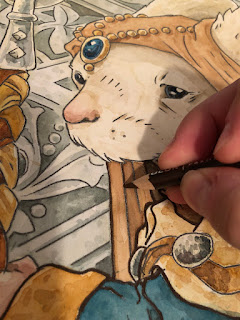 And below you can see both paintings fully finished. 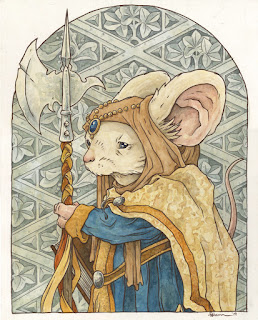 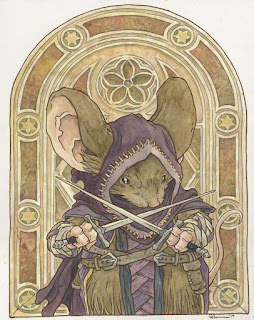 To repeat, one of these will be going into the Heroes Con auction (I've been told they do phone bids) And the other will be available at my artist alley table at Heroes the morning after with a similar price to the winning bid at the auction.

For Reference, here is the blogpost for my two paintings from last year: https://davidpetersen.blogspot.com/2018/06/heroes-con-2018-auction-pieces.html