Blacksad for the Baltimore Yearbook 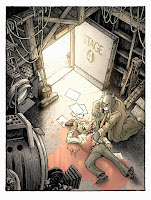 For the last several years at the Baltimore Comic Con, the organizers have released a 'Yearbook' tribute book that honors a specific title or character (usually it's creator-owned and the creator(s) is a guest of the con). This year it's Blacksad by Juan Díaz Canales and Juanjo Guarnido.

To the left you can see the finished version of my tribute to the anthopomorphic cat detective John Blacksad. Below I go into my thought process and art steps to get to the finished piece.

For starters, I needed an idea. I wanted to avoid doing the pinup style drawing of Blacksad with a 'dame' posed with either a gun or cocktail. I avoided this because I knew the yearbook would be full of them, but also because it didn't convey the storytelling and framing Juanjo does so well. I especially like his bird's-eye views for panels in visually detailed rooms.
Since detailed rooms are something I like drawing, and the camera placement was something I appreciated in particular, this felt like the right type of piece to do... 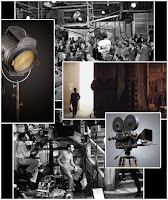 The next step was where to place the scene––what was the story, the moment, the mood. My first thought was a bar, and to perhaps find a historic photo of a Baltimore bar to tie it in with the location of the convention...but With Blacksad being a noir detective book, I kept coming back to the visual of a murder on a Hollywood soundstage. So, I went to work with google image searching every keyword pairing I could think of for vintage soundstage production views & equipment. To the left you can see a few examples of my harvest. 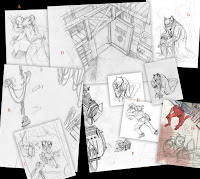 Then I started generating sketches. After a few character sketches (A & G) and a thumbnail of the whole piece (C) I decided the perspective on the location was key, so I started working on drawing the set piece (D, F, & B). Some of those were done by overlapping sheets of paper on a lightpad to be able to draw props or details in over the base architecture without having to erase bits. Once I had the room view locked, I could toy with the figures (E). As for the story of the piece, I went for a commentary about Disney canceling the Mouse Guard movie...the vicim in this Hollywood murder is a mouse, and the pool of blood he's found in is forming a familiar hidden figure comprised of three circles. Part way through the pencil drawings, I second guessed my composition and toyed with the idea of staring over--Blacksad's feet up on his desk in a cluttered PI's office full of easter-eggs as he raises a glass of scotch to the viewer. But I ended up staying on course with the bird's-eye idea. 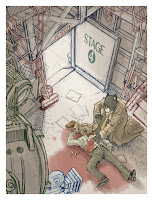 I scanned all my pencil drawings and started assembling them into one composition in Photoshop. Because so many of the elements were on different layers, it allowed me to adjust the sizes of things that were slightly off, or omit parts that were unnecessary. Digitally I could also fix the 'Stage 4' door sign as well as the 'no smoking' with fonts and perspective-warp tools.

To get the idea of where the light and shadows would be I did a quick digital paint job to help me see the overall piece before the next step. 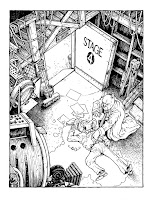 For the final inks, I first printed out the above digital composition and taped it to the back of a sheet of Strathmore 300 series bristol. On my Huion lightpad, I can see through the surface of the bristol down to the printout to use it as a guide to ink by. I used Copic Multiliner pens (mostly the 0.7 nib) to do all the inkwork.

It was in this stage that I started to 1) see all the perspective flaws I missed in the pencils, and 2) overworked the textures and hatching to compensate. 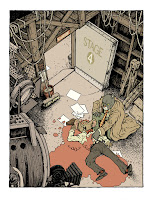 Once the inks were finished I could start the coloring process. Luckily I had my digital prelim to eyedropper colors from to get close to the final look right off the bat. I also took this step to establish some key color holds. Color holds are areas where I want the inkwork to be a painted color and not black. So the 'stage 4' and 'no smoking' lettering, the texture of the spotlight lens, and the stripes on Blacksad's tie. Normally I'd also have done the blood outline here...but I guess I did that in the final rendering work. 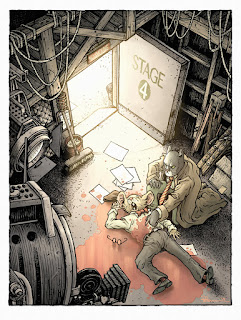 The last step was to do the final rendering and lighting effects for the piece. I did this mostly using the dodge and burn tools, but in a few instances, like the shiny reflections in the blood, I used a stylus and the paintbrush tool.


This piece will be published in the Baltimore Yearbook later this month. That book will be available for purchase at the convention and through the con's website afterwards. The original inked piece will also be for sale in the art auction at the con on Saturday.