The newest episode of The Plotmasters Project went live today. It's an episode Jesse and I recorded LIVE on my Twitch stream during ONLINECON. (If you missed the episode, I've included it at the bottom of the post and a direct link here: https://youtu.be/hSCi6YumUaM
HERO SQUAD is a IP of Jesse's that is the subject of this latest episode. To the left you can see my finished Plotmasters update. And below in the blog, I'll share my process for creating it and my ideas along the way. 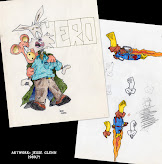 Here is some of Jesse's original art for Hero Squad from the late 80's or the earliest of 90's. The characters were based on two of his childhood stuffed animals: a bear named Timmy and a rabbit whose name has been lost to time as well as a comic-strip style flying hamster with a jetpack and a tall yellow hat.

Jesse and I talk more in the episode about the characters--but essentially, the bear and rabbit are not-so-great at the hero-ing gig, and the hamster is. 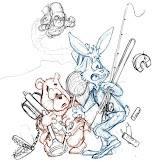 So, I started with a series of pencil drawings to create my Plotmatsers updated piece of the Hero Squad. I drew the bear and rabbit seprately in copy paper, and then used Photoshop to compose them into a composition I liked. On a lightpad, I put a new sheet of paper over each character to add in their array of hero-gear: a bear-trap, a toilet plunger, a shotgun, a tank sprayer, a butterfly net, dynamite, and a magnet on a fishing line. These accessories were inspired by the Disney short 'The Lonsome Ghosts' and from a scene in the Wizard of Oz. The Hamster was a smaller drawing I also digitally added in. 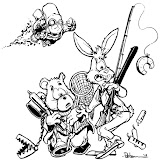 To do something a little different, I decided to ink the piece not using my usual Copic Multiliner pens, but rather some Pigma Brush pens. I wanted to have more of a cartoonist's life and energy about them--something you might see in a comic strip. On my lightpad I was able to see through a sheet of Strathmore 300 series bristol down to a printout of my composition as I inked. Unintentionally, I found that when I inked these more cartoony characters with a brush-pen I ended up with work that looks like it's paying homage to Skottie Young or Jake Parker...which was a lovely and unintentional happenstance.

With the inks finished, I scanned them into Photoshop to color the final piece and add a title treatment as a background. Because I'd already inked these characters differently, I also opted to color them differently. Instead of rendering them with the dodge and burn tools like I normally color, I decided to just add 2 layers over my flat colors: one for shadows (set to multiply) and one for highlights (set to screen). I drew the shadows and highlights using my tablet (something I rarely use when digitally coloring).
The Plotmasters Project: Hero Squad
Direct link for YouTube:
https://youtu.be/hSCi6YumUaM
Posted by DPetersen at 9:00 AM