This Saturday (Sept. 19th), I'll be at the Windy City comic con with fellow South East-Michigan pals Jeremy Bastian & Katie Cook. Because this is a one day show, I will be doing free quick doodles for anyone who has a Mouse Guard hardcover or their own sketchbook for me to do it in.

Long Beach Comic Con poster exclusive:
At the Long Beach Con (Oct 2-4), I'll be signing an all-new, exclusive Mouse Guard print, with an image created specifically for Long Beach Comic Con. Available only at the Atomic Apple booth. Limited to 25 pieces per day (75 total). I'm pretty happy with how this turned out. Careful readers/fans may be able to figure out both the mouse and location featured (though it will take some extrapolation)...though if you do, there is no prize this time.

Big Apple Con: *just added*
I will be attending this year's Big Apple Con (Oct 16-18). This was a last minute addition for my schedule, but as my next NYC show wouldn't be until fall of '10 (which at best I'll only make 1 day of), it is a trip I felt was needed. Thanks to Peter Katz for making the arrangements!

NYT Best Seller Week 6:
I almost hate to keep posting on this every week because I don't know how many times I can say I'm surprised! Is is now ranked #10 (out of 10) So I suspect Winter not to be there again next week, but if it is, it's thanks to the fans! Here is the full list 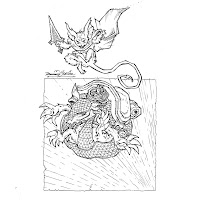 Guess I'll have to scout eBay for the poster after the Con though, looks absolutely stunning :)

Congrats on week six David! Has anyone found the easter egg in the pile of bones yet? may the force be with you! LOL when I found it!

I did immediately recognize the location and mouse, but the mallard is a little tricky. It may be the same duck illustrated in the RPG, but who knows...

Only the mouse and location are recognizeable...don't hunt for a duck.

Nice meeting you at the convention David, and VERY COOL to see the color version of that Kenzie ice cave illustration. Of course I had a ton of questions come to mind after I left, but that's ok. Again, looking forward to the Black Axe series.