This Friday (August 24th) I will be signing at Borders Bookstore in the Oakland Mall in Troy, MI. The signing starts at 7pm and I'm happy to sign your Mouse Guard issues as well as Hardcovers. Borders will have hardcovers available for purchase. If you are in the area, stop by! more info

Baltimore Comic Con info
Only a little over a few weeks away from the Baltimore con. I'll be at the Archaia booth both Saturday and Sunday. I'll be signing and chatting as usual. I'll also be doing inked sketches for $40. I'm looking forward to seeing pals Sergio Aragones, Craig Rousseau, and Andy Runton as well as lots of other artists I am a fan of as well. This will also be my last con of the season now that the Motor City show is an anual event. 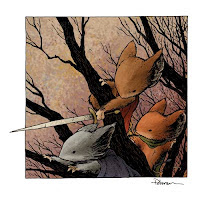 Other MG News:
Here is a sketch I did for my pals Morna and Gary I have colored the sketch for inclusion in a later Mouse guard publication.
There are some fun developments happening with Mouse Guard items we are working on..things that the fans have asked for. I'm sorry to be a tease, but I can't say much more than that right now, but I'll post things as soon as an official announcement has been made.
Posted by DPetersen at 1:23 AM 2 comments: 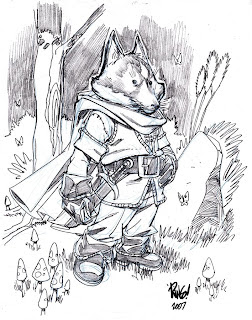 I heard the terrible news yesterday morning about Mike's passing at the age of 44. Too young. The first I saw of Mike's work was when he was doing the how-to section in Wizard comics magazine. I really enjoyed his clean crisp pencils and how well he explained forms and how well his drawings demonstrated his lessons. I met Mike last year at the Baltimore con via his pals Craig Rousseau and Todd Dezago. He was amazingly positive and friendly. Over the last year he and I e-mailed each other a few times. The most recent was a few weeks ago about the Russ Manning Award. I replied to him in brief knowing we would be able to catch-up more at this years Baltimore Con. I was wrong.
Mike's work embraced a classic all-ages approach where ladies didn't need to be half naked to be beautiful and villians didn't have to be dripping in blood to be menacing. The comics industry just lost one of their freshest voices. Even after decades in the business, his work still looked original, interesting, solid, and new. I'll miss his artwork. 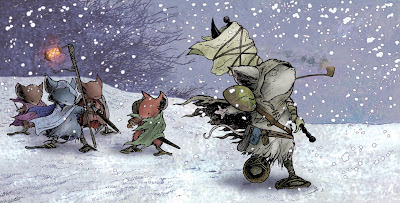 Winter 1152 Issue #1 *UPDATE*
Due to a mix-up at Diamond, the books didn't ship out and have been at Diamond's warehouse for weeks. (The books were set to go out for the 25th of July!!!) Now it looks like the release date will be August 22th barring an unforseen incident.
Please accept my appologies. (I mistakenly typed the wrong day when I made this update..It's the 22nd, my appologies AGAIN!) 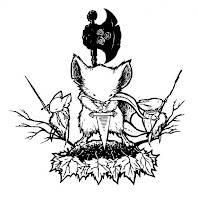 Black and White Hardcover of Fall 1152!
We are moving forward with it! I have talked about it over the past year at shows and people always responded positively. The plan is an oversized (12" x 12" same size as the original artwork), limited edition (1000 copies numbered), in a slipcase. Lots of people have commented on how they like seeing the original black and white linework on the pages when I bring them to cons. Mark and I have batted around this idea for a while and are looking at a Dec. release*
*please note that the details of this release may change
Posted by DPetersen at 6:23 PM No comments: 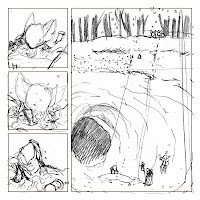 I think the post-San Diego exhaustion/con-detox has taken full effect and I am back to working on Mouse Guard as hard as ever. Once I got back there were several days worth of business stuff to attend to, some printing, e-mails, phone calls, shipping, etc. It's amazing how much of a day can be eaten up with that stuff, so it feels good to be back to drawing.

Sketchbooks:
For anyone who is bidding on e-bay, let me say that I am NOT sold out! I plan on bringing the remainder to Baltimore. I will sell them for the same $ as SDCC: $10 each. If you can't make it to Baltimore, but know someone who will, I'd be happy to have them pick up multiple copies.

Appearances:I will be doing two signings at Borders this month. The first is at Borders in my hometown of Flint, MI on Friday Aug 10th starting at 7pm. click here for Flint Borders site

Then on Aug 24th I will be signing at the Borders in Troy, MI at the Oakland Mallclick here for Troy Borders site

I'm really looking forward to the Flint signing because I plan on also visiting with a good pal of mine who is the basis for the character Kenzie in Mouse Guard. He was in Oklahoma all this summer and it will be good to catch up with him. I have known him since I was 11 and he was the best man at my wedding.
(photo circa 1996)

And one last art-and-tell with plug, Kory Bingaman has a fun webcomic strip called Skin Deep. She and I were frequent posters on the Hellboy.com forum and I am happy that she is plugging along and posting a fun comic to read twice a week. I had been itching to draw the character 'Jimmothy' a Gryphon from Liverpool, and before I knew it, I had sketched out the wholle Skin Deep crew.

Back to the mice.