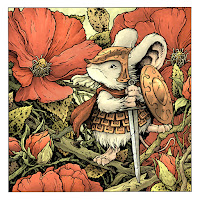 Since 2012 I've released a new 11" x 11" limited edition print every year. Past year's pieces have been titled "Peacock", "Raspberry","Moonflower", "Lavender", and "Juniper". Julia requested that these prints be pretty and not just a mouse doing battle, but more aesthetically feminine. To the left is the finished artwork for this year's "Rose" and below I'll show the full process. 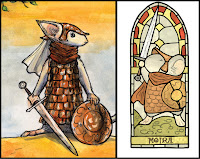 For this year's print, "Rose" I chose to focus on a character from Mark Smylie's Legends of the Guard story "Crown of Silver, Crown of Gold". In that story a mouse named Moria from Rosestone who avenged her beloved warrior mouse after he was slain due to treachery from the king. In the last panel (shown to the right) she takes up his armor and weapons and becomes a well-known guardmouse. In Black Axe, I went further than that and showed (via a stained glass tribute) that she became one of the most celebrated of Matriarchs of the Guard) 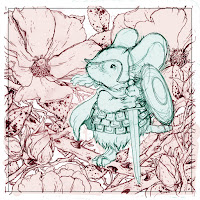 I started with the figure of Moria drawing her out on copy paper. I tried a few variations and ended up merging the two (the head from one and the body/pose of the other). Then I placed a printout of my merged drawing on my light pad and on a new sheet of paper over top, I drew out a series of wild roses making sure to have intersection points for her feet to touch. After scanning those two drawings in to photoshop, tinting them different colors to help me visualize, resizing them, and making some placement tweaks, I had a layout for this print ready. 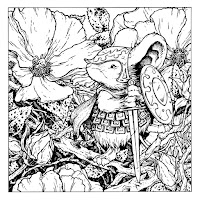 I printed the composite layout onto two sheets of legal copy paper (being 11" square, the layout wouldn't fit across one sheet, so I had to print the top and bottom separately and then puzzle them back together). Using my light pad, I was able to see through a sheet of bristol to the printout of my layout below. I taped the layout to my bristol to make sure I didn't lose registration as I inked. To the right you can see the finished ink (this was inked all with Copic Multiliner SP pens (the 0.7 & 0.3 nibs). 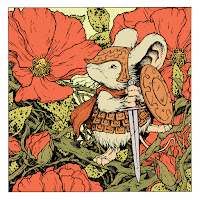 Once the inking was done, I started coloring the piece. This process starts with a job called 'flatting' where you simply lay in flat colors to establish which parts are which colors. With Moria's copper armor and shield, red cloak, and the color of the roses, I knew this was going to be a warm-toned piece. So even my greens are falling into a yellow-brown zone. I looked at varieties of wild roses to get a sense of the color palates, but shifted everything a bit more red/magenta to create the color unity I wanted...though that would mean being careful to get all the various 'greens' to read as different shapes without being able to adjust their overall hue too far away from the base color.

The final step was to render the image. This means going in and adding depth and texture with shadow, and highlights. I do this using the Dodge and Burn tools in Photoshop (and a textured stock brush). Making sure to give the armor the right amount of rendering so it looks metallic while also dialing it back on the flowers so they don't look plastic took some self control and fiddling to get right.

Again, the print is available in my online store and at my convention appearances until all 300 are sold out.

For the prologue of The Black Axe (a story originally published on Free Comic Book Day in 2010), I built a model of a a barrel carrier for the mice to re-por the scent border. With the fan excitement over the video of Adam Savage talking to me about my models on Tested.com I wanted to do some videos where I talk about a specific model, how I built it, what the materials were, and why I built it in the first place.

Below you can watch as I explain the thought process of how mice would pour the border:

As a fun experiment at my weekly Art Night gathering with other local artist friends, I tried my hand at drawing a favorite of mine as a kid...the Tundercats! I didn't want to redesign them, or stick to copying a model sheet, I wanted to just draw them as I would, with respect to the original designs but enough David Petersen linework that you knew it was from my hand.


I want to reiterate, these were only for fun. I'm not working on any Thundercats Project, and I won't make prints of characetrs I don't own. With that said, enjoy! 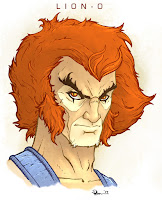 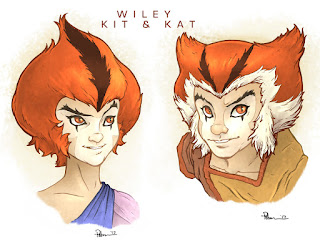 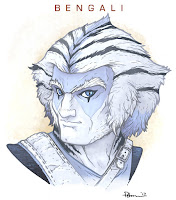 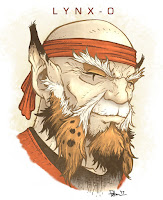 Many of the original inked pieces are available in my online store:
http://mouseguard.bigcartel.com/category/original-artwork 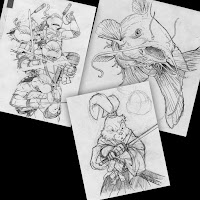 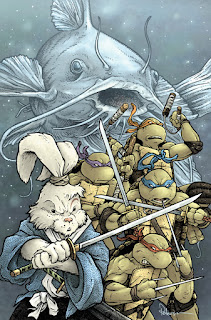