Mid-Ohio Con!!
I will be a guest of the Mid Ohio Con!! I'm really excited about doing this show. I have never been there, but heard wonderful things about it. They were kind enough to do a nice write up about me coming on their blog
In addition I have also added a few shows that have not made their way on to the 'appearances' section of my websites. Julia and I have also started booking shows for 2009, and should have an appearance list together shortly. Until then here is the schedule for the rest of '08!
Comic Geek Speak Super Show Sept 6-7
Baltimore Comic Con: Sept. 27-28
Mid Ohio Con: Oct. 4-5
Lyon Library: Oct 14
Monroe Writers on the River: Nov. 9
Portsmouth Comic Book Show: Nov. 16
Tutorial:
I have been asked several times to elaborate on my coloring techniques. While I'm not ready to give up my secrets, I did want to do a little swatch-visual aid to discuss the tools Dodge & Burn.

Quite simply, Dodge makes colors lighter, Burn makes them darker. They are tools that I use to render and shade after I have established basic colors. You can use any of the dynamic brush settings when using either tool (scattering, texture, shape, etc) but for purposes of demonstration, I used a simple round brush. There are 3 range settings for each tool as well as an 'exposure' % setting (which I like to think of as a 'how-heavy-handed' % setting). The three ranges are Highlights, Midtones, and Shadows. While these dictate which range of tones are MOST effected by the tools, it also dictates how the colors are lightened and darkened.

When using the Burn tool, 'Highlights' tends to desaturate as it darkens. 'Midtones' keeps a similar saturation of color, and 'Shadows' increases the saturation.

When using the Dodge tool, the results are almost reversed. Highlights saturates as it lightens, 'Midtones' keeps it roughly the same, and 'Highlights' desaturates. In this example of my base colors though, it was almost impossible to tell the difference between the 'Midtone' and 'Shadows' settings in terms of how they altered the colors as they lightened. 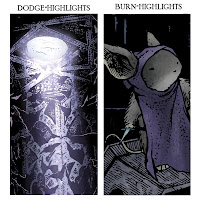 I find that using the destauration or over saturation of each setting can be to your advantage. In the current issues of Mouse Guard, some of the mice are stuck in a cavernous kingdom with little to no light. When I use the Burn tool on those pages, I have it set for 'Highlights' so that it mutes my shadows. In extreme light or snow settings, I use the 'Highlights setting on the Dodge tool so that the lighter areas get very intense and blinding.
I hope to do a few more of these types of tutorials. I am a fan of James Gurney's blog for all that it has to offer and teach on a daily basis, and while I'm no James Gurney, I'd like to share more about the theories of creative work. I have a few topics in mind for the future: Greyscale vs Bitmap and modelmaking.

Fan Art
This one was sent to the ASP site and then forwarded on to me. It's a painting with 3D-panel-breaking-detail by Pam Burton. Thanks Pam!!!
Posted by DPetersen at 3:28 PM 3 comments:

Fish 'N Chips
Eisner nominated Steve Hamaker, colorist of the Scholastic editions of Bone, has a creator owned comic series called Fish 'N Chips. Steve and I being from the same home-town of Flint, MI, we struck up a friendship a few years ago at a con (though we never knew each other in our Flint-days). Steve is getting ready to release another Fish 'N Chips collection and asked me to contribute a pin-up. I was happy to. Here is the pencil sketch, inked, greyscaled and colored versions of the image. In return, Steve sent me a Mouse Guard pin-up I really love and can't wait until it can be published. 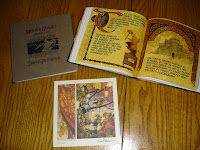 Mouse Guard in German!!
I received the hardcover editions of Mouse Guard in German a few weeks ago. Cross Cult, my German publisher, asked to do a traditional release and a limited edition. The limited version has a leather-like cover with a black image of Lieam and a snake wreathed in maple leaves. It also contained a signed and numbered print of the 'harvest' (or 'ernte') image. Both are great editions of Mouse Guard and I'm proud to have the book in other countries in other languages.


I have remodeled my parent site to reflect the design of mouseguard.net. The old place needed some dusting and sprucing. The work featured there is more current and features the same 'news' feed as mouseguard.net (which makes it much easier to update!) Keep a lookout for more new pieces being featured on the site as I continue to do some freelance covers, comic shorts, and a children's book with Harper Collins.


While at Gencon, I picked up an awesome page (pictured) from Mark Smylie from his book Artesia. Mark mentioned getting a piece of my artwork and I told him that I owed him a page for the awesome pin-up he contributed in issue #4 of Fall 1152. He opted, instead, for a Artesia pin-up from me. I am really looking forward to doing an Artesia piece. I'll share my work on it when I get to the work.

Fan Art:
This painted set of Guard-mousey-goodness was sent to me by Adam Dodge. Adam said he painted these over the summer and I certainly thank him for doing so and for sharing them with me.
Posted by DPetersen at 4:20 PM 2 comments: