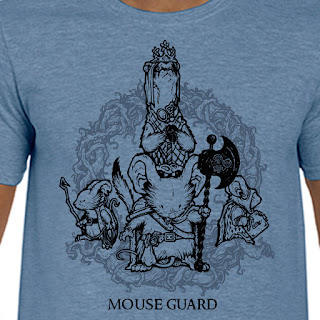 A new Mouse Guard tee-shirt for 2018! I've taken the inkwork for The Black Axe Black and White Edition cover and used it for the tee-art. Celanawe, Em, Conrad, & King Luthebon are in black as the briar wreath is in dark slate blue. The art is printed on a Heather Indigo Gildan softstyle unisex tee.

Look for this shirt at my 2018 convention appearances as well as eventually in my online store.

Conrad, the salty old peg-legged Guardmouse from Fall 1152 and The Black Axe, is the subject of a new 5X7 print (matted to 8" x 10") I'll be offering at conventions and in my online store. Conrad joins a portrait series that also includes: Saxon, Sadie, Gwendolyn, Kenzie, Rand, and Lieam.

To the left you can see the final artwork for the print, but below I walk through the process for creating this piece (which I also streamed LIVE several portions of on Twitch). 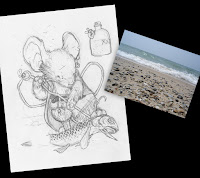 I started with a sketch of Conrad and a photo referenced location. The sketch is all in pencil on copy paper. I like to use copy paper because I don't feel precious about it, there is less at stake and so I'll feel more free to dig in to the drawing and worry less about mistakes. This isn't the final drawing and putting pencil on copy paper reinforces that in my head as I draw. I didn't put the XXX jug into the composition because I had the feeling I was going to move it around once I had everything in the size of the mat. The beach photo is one I took, setting the camera very low to get a mouse-eye-view at the beach in Ludington, Michigan. 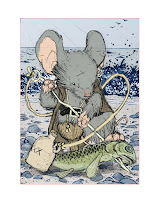 I scanned the sketch into Photoshop and moved the jug into place. I also placed the photo behind it. Zooming in and shifting around, I was able to find a composition that I liked, where the horizon line felt right where the breaking wave had the most impact. I drew over the photo at this scale (printed out for reference) on copy paper on a light pad to define the shape of the breaking splash of the wave and the shape and placement of the rocks. Lining that drawing (tinted blue) with the Conrad sketch I had my final layout. Since the background photo was providing some color tone, I spotted in some flat colors for Conrad and the fish to help me visualize the finished piece as I worked. 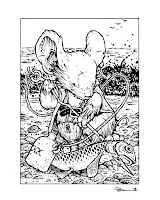 A printed version of the above digital layout was taped to the back of a sheet of Strathmore 300 series bristol. On a light pad, I was able to see the printout as a guide and ink the lines confidently with Copic Multiliners (I think I only used the 0.7 nib here). Notice I didn't ink the water marks coming into contact with Conrad. That's in part to visually push the background back, but it's also so that on the next step my life is a bit easier... 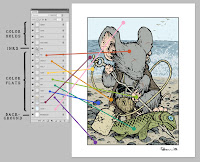 That step is called 'flatting'. It's about establishing what areas are what colors, including the color holds (areas where I want the inkwork to be a color other than black).
There no worry about rendering here. Just flat color space. in this screenshot I've included my layer menu to show how I break down what colors go on what layers and where they fall in order above or below the inks layer (note the color holds are all above the inks and the image colors all are below).

I find that being able to click between layers to select what part of the piece you want to effect as you render is quicker than having the flats on one layer and using the magic-wand tool (a more common and popular method). To render this piece I used the dodge and burn tools in Photoshop and a stock textured brush.

To the right you can see the final results.
And you can purchase the matted print in my online store: http://mouseguard.bigcartel.com/product/conrad-matted-print

Celanawe's distant kin, caller to action, and companion on the quest of the Black Axe (not to mention ancestor of Farrer, forger of the Black Axe itself) Em of Appleloft is the subject of a new 5X7 print (matted to 8" x 10") I'll be offering at conventions and in my online store. Em joins a portrait series that also includes: Saxon, Sadie, Gwendolyn, Kenzie, Rand, Lieam, and Conrad. To the left you can see the final artwork for the print, but below I walk through the process for creating this piece (which I also streamed LIVE several portions of on Twitch). 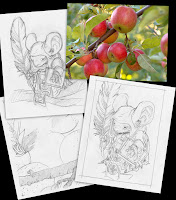 The first sketch of Em, I didn't care for so much (top left sketch). Nothing major was off, just lots of little somethings. On a lightbox, I redrew her, tweaking things as I went, adjusting her head angle and drape of her dress (bottom right). As she's from Appleloft, I decided to have her amongst the namesake fruit of that village. The stock photo reference was gathered (top right), cropped and amended, and then drawn onto copy paper on a light pad (bottom left).
Th emain motifs for Em was to make her wise and studious, carrying her notes and illuminations concerning the Black Axe history and lore while holding a feather quill to associate in her connection to birds. 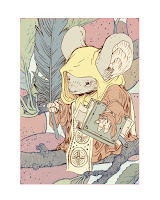 The various drawings above were scanned in and assembled into a finished layout. The figure drawing scan is all tinted warm and the background cool. This helped me to make sense of the lines not only as I assembled this, but in the next step as I inked, helping me distinguish forms from one another. For similar reasons, I added in the color tones for the whole piece to help me start to solve any tangents or light on light or dark on dark areas that may not help the figure to separate from the background. 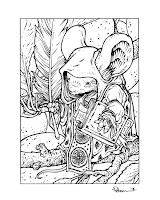 The above layout was printed out on copy paper and then taped to a back of a sheet of Strathmore 300 series bristol. On a light pad, I can see through the bristol to the printout and use it as a guide as I ink. For pens, I use Copic Multiliner SPs. The SP version has replaceable nibs and ink cartridges. I used the 0.7 nib for this exclusively I believe.

Knowing tone & value information from the layout, I was careful about where and how much texture I put into things like the leaves and branches. 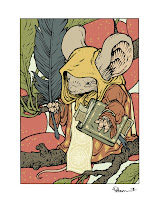 When the inks were scanned, I flatted the colors in preparation for the final colors. This process is like a coloring book for professionals: 'stay inside the lines'. Here I'm putting in flat color where it belongs, establishing that her dress color is different than her hood or her fur, or her inner ear. I've also established some color-holds (areas where I want the ink lines as a color rather than black): her dress & sash pattern, the book cover details, and the spots on the apples.

The final step is the color rendering. I use the dodge and burn tools with a stock textured brush to do all the shading and highlighting. There are a few settings in Photoshop for dodge and burn to take note of for how I get the colors the way I want them, most importantly the 'range', which not only controls what values are effected the quickest/most by the tool, but also if it saturates or desaturates to get there.


To the right you can see the finished print for Em of Appleloft.
And you can purchase the print from my online store:
http://mouseguard.bigcartel.com/product/em-of-appleloft-matted-print-8x10

I've made a Creator Commentary video for the third issue/chapter of Mouse Guard Fall 1152: Shadows Within.  For this issue and the remaining issues in Fall 1152, I’ll be doing the commentary as audio-only. But please feel free to follow along in your copy of the story in either issue form of from the hardcover as I talk about the behind the scenes details, art notes, and my head-space as I go page by page and panel by panel. Enjoy!