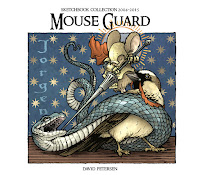 As the final blogpost of 2015, the 10 year anniversary of Mouse Guard being published, I decided to collect all ELEVEN of my convention sketchbooks into a single digital collection. You can see the new cover art I did for the collection to the left (my mousey take on St. George & the Dragon)

The digital sketchbook collection is available for purchase through my online store: http://mouseguard.bigcartel.com/product/mouse-guard-digital-sketchbook-collection-2004-2015 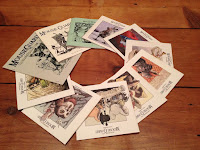 I know the past printed sketchbooks have been difficult to come by for fans who missed out on earlier years. In fact, the first Mouse Guard sketchbook (2004) was printed on my home printer and only about 4 copies were made. The following two were black and white, and from 2008 to present, they have all been in color. The digital collection has all the major material found in these 11 sketchbooks (with the exception of preliminary pencil sketches in the 2007 sketchbook which have since been reprinted in the Art of Mouse Guard hardcover).

288 pages of commissions, Free Comic Book Day covers & promotions, odd pieces I did as gifts and more populate this decade+ bundle of work. Each year is delineated with a decorative border on the outer page to keep track of where in chronology the pieces fall. To the left is a sampling of one page per year of what is included in the sketchbook collection

In addition to all of that material, I also went back through my folders and found 30 pieces that for one reason or another, didn't make it into various years' sketchbooks. I have colored many of these pieces as well (in the years where the sketchbooks were in color). You can see three sample of these below: Marx Bros. Mice, Lord of the Rings Mice, and Oregon Trail Mice: 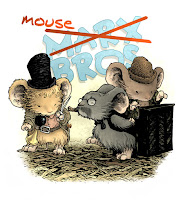 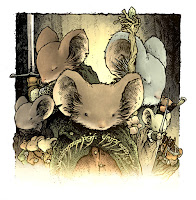 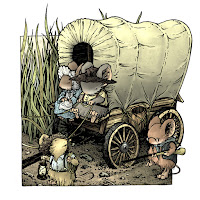 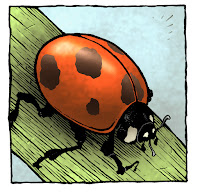 I've been asked by fans when I posted my speed coloring videos to do a narrated walk through demonstration of my coloring process. I created the Ladybug image you see to the left as a demo piece not only to show the flatting and rendering steps of color, but also adjusting the levels of scanned inks to prepare for coloring and adding color holds so black ink-work can be painted and rendered as a color separately.

Below you will find all 3 videos: 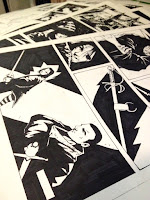 While doing some sorting in my studio, I cam across 10 pages of a comic Jesse Glenn (The real-life Kenzie) and I worked on together at the turn of the century. So for today's blogpost, I'm opening "The Vault" and sharing with you the origin & concepts for JESTERS as well as all of the pages that were completed, and two recent drawings I did of the characters.

Part of the reason for sharing this is that after the Art Of Mouse Guard came out, I realized how cathartic and rewarding for others it can be to share embarrassing older work, to show artistic development and that everyone has work they are no longer proud of. 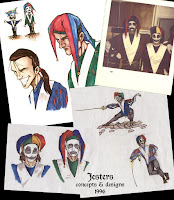 Jesters started as Halloween costumes in 1995 Jesse cobbled together for he & I. The only store bought elements were the hats; the sashes were National Honors Society sashes, the shirts were old ones of Jesse's, and the chords were from High School Honors. After the Halloween party where these were used, I couldn't help but think that these characters would be a good starting point for a comic story. Two medieval spies, swashbucklers, and adventurers, who are loyal to the king, pose as fools to infiltrate enemy monarch's courts, and merchant's feasts in service to their king. Who would suspect the Jesters? 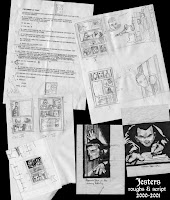 But, it wasn't until 2000, when Jesse started writing a script that anything more came of it. Jess had just re-read some Alexander Dumas that inspired him to craft a banter-filled story about political intrigue with the king and our heroes mistakenly jailed at the start. Jesse didn't break the script up into pages or panels, so I just started making notes on the printed script pages for where I though good breaks were or where I thought was the limit of what I could fit on a single page. 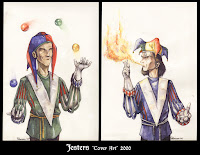 To the right are two watercolored "covers" (I don't know how I thought these could work as covers...each only showing half of the duo...and in no context...or even background.

Below are the 10 finished pages (as much as Jesse had produced script for). I was still in my phase of trying to emulate Mike Mignola's work to cover up my shortcomings at illustrating (especially when drawing people) 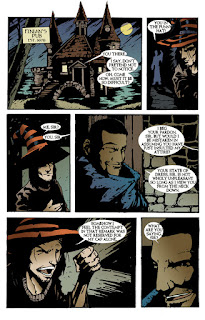 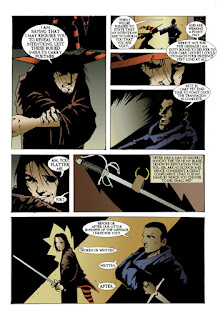 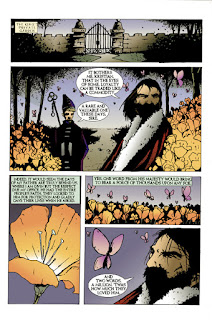 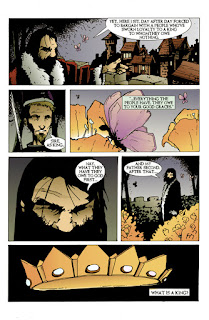 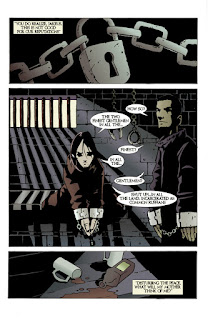 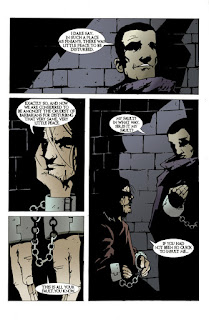 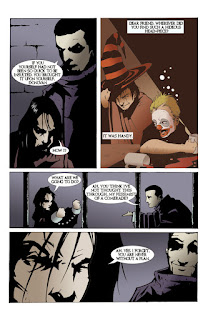 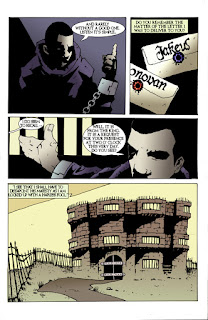 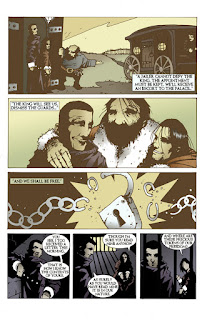 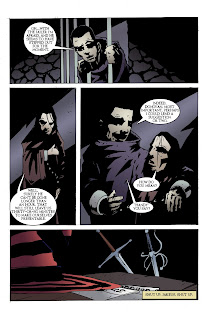 Now for the growth part of the post. I have no plans to do anything with JESTERS at the present time, but these old characters still rattle around inside my head and every now and then ask to be let out and updated. I find it a useful exercise (us the From the Vault tag at the bottom of this post to see more examples). 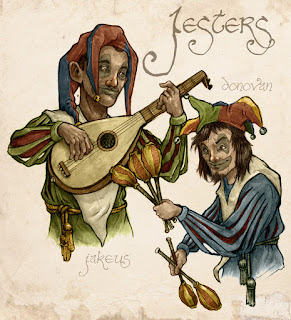 The first of these was drawn & rendered in pencil and then digitally colored and manipulated. I stuck closely here with the original designs of the characters costumes (though I avoided the Insane Clown Posse-style face paint and just hinted at the happy and sad faces a bit more subtlety. 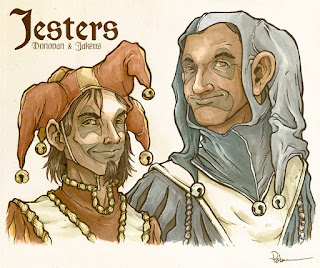 And the second was done all in grey Copic markers (I'd originally planned to paint them in watercolor, but for some reason I broke out my rarely used markers instead) and digitally colored. Here I deviated from their original costumes, not just in style, but also in color (making a nod to the Saxon & Kenzie nature of the two)

As I said, I don't know if Jesse or I will ever do anything with Jesters, but digging out the old work, reviewing old files, and making some new artwork feels like visiting old friends.
Posted by DPetersen at 9:00 AM 2 comments:

After watchine a video Adam Savage linked to early this year, I became fascinated with Theo Jansen's Strandbeests. And while my niece Emma was staying with us for a birthday weekend, I showed her the videos of various Strandbeests walking on the beach. She was captivated. And I thought it would be nice to build a table-top model of one...but instead of buying a kit, I opted that Emma and I should scratch build one together. I watched a few more videos, and looked at a few of the model kits online, then Emma and I hit a craft store or two and bought various sizes of popsicle sticks, dowels, florist's wire, round toothpicks, and glue. 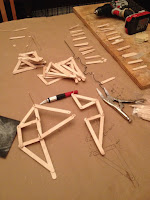 I'd broken down the leg into a simple diagram I traced on to the craft paper we used to protect my dining room table. On the right you can see a single leg assembly with the diagram on the paper below. Once we had our plan, and I could visually decribe to Emma what we were doing, I put her to work cutting and drilling popsicle sticks, and then glueing sub-assemblies. Emma had never used a hobby knife or a drill before, so it was exciting for me to teach her how to use them, and exciting for her to do something so new to her. 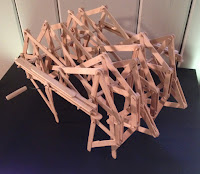 After hours and hours, Emma conked out, and I finished the assembly in the wee digits of the morning. But, it still needed fine tuning. The model Strandbeest has sat in my studio since March, unfinished and fragile, until I got the urge a few weeks ago to repair, tweak, and polish off the last bits of the model. To the left, you can see the finished version, which may not look too different from the older photos above... Directly below, you can watch a video of our hand-crank model in action, then further below, I'll document some details and share the rough plans. 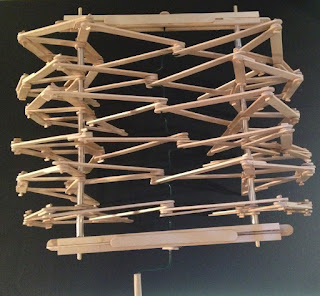 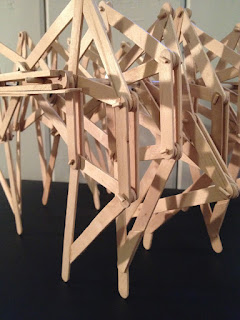 The front chassis that holds the axles was
never completed originally. So, I completed what
needed to be done, and reinforced both ends to
prevent racking and to avoid catastrophe. 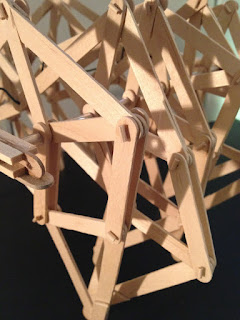 All of the moving joints are pinned with round
toothpicks that have smaller cuttings of the same
material glued across the ends to form a capital "I" shape.
Many of these needed minor repairs and re-gluing. 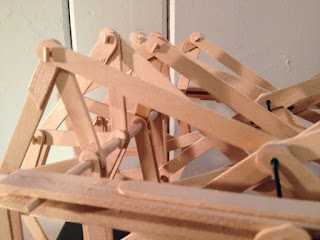 With the chassis secured, I was able to trim down the
length of the axles. I left a bit of them showing so that seeing
the crafted materials were part of the model's charm. 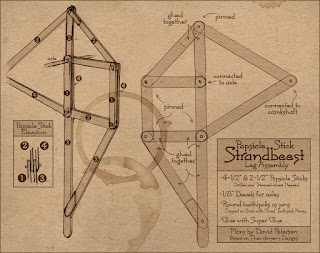 Rough plans & notes for those inspired
enough to try their own hands at one. 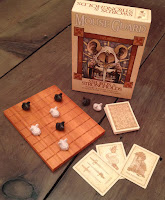 With the Mouse Guard board game Swords & Strongholds now available to everyone, I wanted to publish a blogpost with all the information for the game in one place.

This is a two player game of mouse strategy from the pages of Mouse Guard. It takes 15-30 minutes to play and comes with a wooden game board, 8 mouse pawns, a deck of 30 cards, and a rule sheet. (at the bottom of this post you can find ordering info)

Luke Crane & I (with the help of the guys from the Geek Nights podcast) made 3 videos to show how to play, answer questions and show and example of a full game played:

Game Rules & How To Play

The game is also distributed through Diamond and Alliance, so your local comic or game shop can order copies to stock their shelves with.