A few weeks back I crypticly tweeted I was working on a cover that would make 11 year old me ecstatic and was a professional dream coming true. I can now reveal that IDW asked me to do a cover for their recently announced Ninja Turtles relaunch! My cover will be on the Raphael one-shot. My love of comics started with the Turtles, I started roleplaying because of the TMNT RPG, and I broke the ice when meeting now-lifelong friend Jesse Glenn (Kenzie) over TMNT at a Boy Scout camp before the cartoon had even hit the airwaves.

TMNT process:
I started with a sketch in my sketchbook (this was attempt #2, I'm keeping #1 under wraps as it was too dull a pose & mood for Raph, but could be reworked in the future if I'm asked to do another TMNT cover). I scanned the sketch, made some adjustments to proportions in photoshop and changed the building and background. I felt the composition were better served of Raph "keeping watch" if I allowed more head room and implied more of a gaze over the whole city. I sent in the digital composition for approval and then printed it out full scale when I got the go ahead to start inking. I layed a sheet of bristol board over the printout and used my sketch as a guide for inking on a lightbox. I scanned the finished inks and started coloring the piece in photoshop by "flatting" in the colors. (Scroll back up to see the finished color artwork) 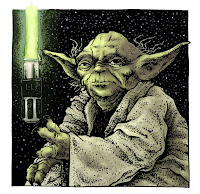 Color
In that Ustream coloring session from a few weeks back I was able to put some color into this Yoda piece. Not to start a Prequel complaint list, but I had imagined Yoda as a Jedi using a lightsaber quite differently than what was ultimately portrayed. Since control, calmness, focus, etc are the virtues of a Jedi, and Yoda is a master among them, he would wield a lightsaber of traditional length, but without touching it. He would close his eyes, raise his arm, and using the force, guide that blade through an amazing spectacle of dueling never letting the opponent get close. Which is why Yoda is not touching his ignited lightsaber in this piece. 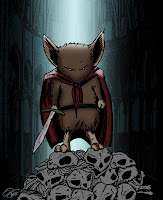 Fan Art:
This Fan Art comes from Jono Kys in South Africa (!!!) He writes: I've been reading comics for many years but this is my first ever fanart and hopefully not the last. Really looking forward to the Winter War series.

Mouse Guard at Comic Con
For the 5 days that is comic con, I'll be spending time at my Artist Alley Table GG-09. I'll have several signings at the Archaia booth: 2635 almost every day. I'll be signing books, selling the 2011 sketchbook. I'm looking forward to the geekfest of creators and fans coming together that is comic con, so I'll see you in a few days!(For those attending, I'll try and tweet (@mouseguard) any location/signing/info updates as much as I can. For those not attending, This will be a good way to keep up with any announcements & Eisner info) 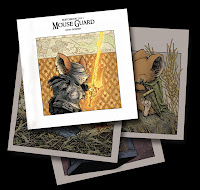 2011 Sketchbook:
Speaking of this year's sketchbook, I wanted to give you all some more info about it. It's a 24 page full color collection of original artwork I have colored specifically for the sketchbook with a few other covers added for good measure. 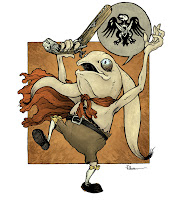 Color:
For Jeremy Bastian's Birthday I did a piece of his Cursed Pirate Girl character Tag Clamb. The character is mostly seen over the course of a few panels in Jeremy's 3rd issue of CPG, but the visuals of this character struck me as amusing and fun to draw. When I was ready to color him, I had to give Jeremy a call to ask about the palette. Jeremy's book being in black & white, I had no idea if Tag was cream or blue or green or mustard...etc. I colored this piece last week as part of that live coloring Ustream session. 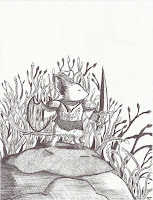 Fan Art:
This week's Fan Art comes from Duncan Walden. He writes that he enjoys Mouse Guard and took pride in all the detail in his fan artwork. Thanks Duncan!!

Congrats in advance!
Jesse Glenn (my friend & the real life basis for Kenzie) and his girlfriend Tomoko Miller are getting married this weekend! I am proud to be serving as the best man and looking forward to having a front-row seat to seeing them tie the knot (provided I don't get him in too much trouble tonight at the bachelor party...) 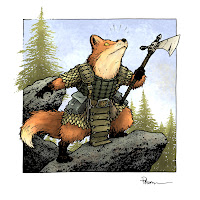 Colored Artwork:
Last night I did a Ustream as I colored artwork that would otherwise never be colored or published (they are not Mouse Guard related). I did so to 1) have a Ustream event and 2) to have some material to share here on the blog for the next few weeks as a wedding, SDCC, & a family get together bar me from current posts). I really like the finished piece, but because it's not how foxes behave in Mouse Guard, I couldn't include it in this year's sketchbook without creating confusion. 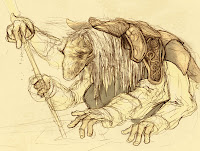 Older Sketches:
While looking for material to fill the blog in advance with for the next few weeks, I stumbled across this drawing of a Mystic (or Uru) from the Dark Crystal. I did this sketch as a warm-up before I did the Dark Crystal poster for Archaia a few years back. The sketch is unfinsihed, but I remember at the time wondering if I had it in me to take something rough like this and use it as the foundation for a digital painting. This seems to be as far as I got, which makes for a nice quick study but a rather unfinished digital painting. 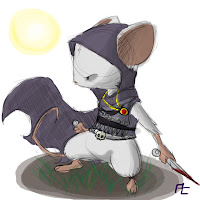 Fan Art:
This week the art was sent in by Alex Challand. He said that Mouse Guard inspires his own artwork. Thanks for the kind words Alex! Very glad you sent this in, I like the character you have put into this mouse with his cool hood & belts.
Upcoming Appearances:
San Diego Comic Con: July 20-24
Baltimore Comic Con: Aug. 20-21
New York Comic Con: Oct. 13-16
Posted by DPetersen at 9:00 AM 4 comments: 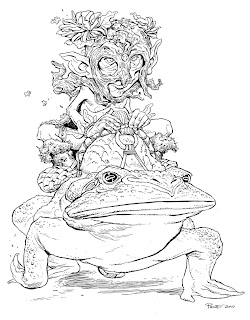 An awesome toad riding goblin-ish-Green-man By Nate Pride (who told me the title that sounded like a Magic the Gathering card, but I forgot it) 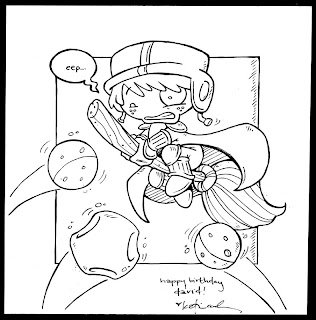 A Katie Cook piece for my Harry Potter art collection of Ron playing Keeper for Griffindor (Weasley is our King...)