Video Blog:Trying something new with a video post about the models I make for Mouse Guard. The video is about 13 min long. Enjoy! 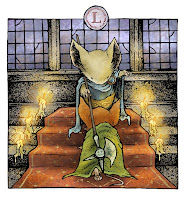 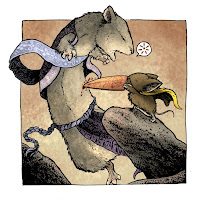 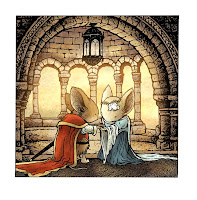 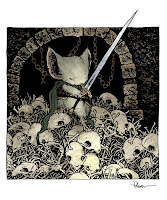 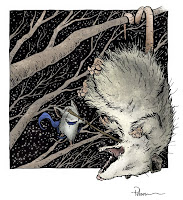 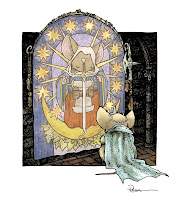 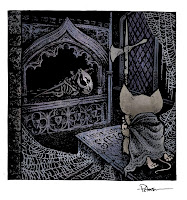 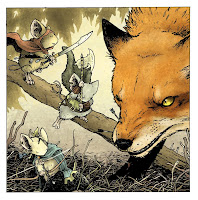 Mouse Guard RPG Boxed Set:
At the NYCC we announced that there will be a Boxed Set of the Mouse Guard RPG to be out later this year. We have currently sold out of the Hardcover (though your local shops and online retailers may still have some in stock) and with plans to reprint, we thought we would offer a deluxe package as well that is full of stuff fans of the game asked for. Also the cover art is the piece I was working on a few weeks back when I was ustreaming the ink-flatting-coloring process and Photoshop crashed on me and I lost everything. (I rescanned and colored the piece the next day) 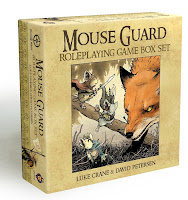 Among the items to be included in the box will be: a softcover edition of the 320-page Mouse Guard Roleplaying Game, a pad of character sheets, a pad of GM sheets, a folding GM screen with handy reference charts, a map of the territories, 5 mouse pawns (which I carved the master for) to mark locations on the map, and a few more items I'd like to talk about in more detail: 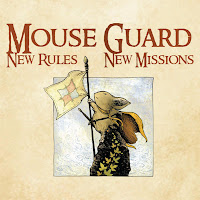 A brand-new 44-page supplement* with new missions and adventures. Luke and I had said from the start that we didn't want to expand the game and make supplements unless we had very good reason to. So in the booklet we cover a few new rules including riding mounts, 'weapons' for conflicts, & three new locations: Flintrust, Grasslake, and Sandmason. The pre-made characters from the main RPG book have been advanced, Celanawe has been added to Kenzie's patrol, and an entire new patrol of characters from the Mouse Guard comics has been made into template characters. With all of that AND three new missions, we feel like this was a supplement worth making.

Dice: In the Mouse Guard RPG, the dice rolls are almost binary: failure( 1-3) and success (4-6) ...with 6 being noted as a 'bonus' success that you can re-roll to gain even more successes. So we designed special dice that are included in this set(x10). The failures are represented by a snake eating it's own tail, the successes are crossed swords, and the '6' is replaced by the Black Axe. The image shown here is a photoshop mockup I made, so the final product may vary slightly from what is pictured. 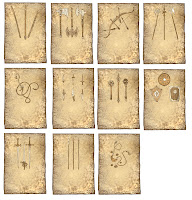 Cards: Three decks of 12 Action Cards each, 15 Condition Cards, & 21 Weapon Cards. All of the cards are designed to help players streamline play. Instead of having to re-reference the book, or pass it among the players every turn, players can refer to their cards of options with rules noted on each. Playing them also saves writing and erasing over and over on your character sheet and/or scrap paper. The weapons cards (of which I did new artwork for..though the cards shown are not the final design of the card layout, but rather to show the artwork) help players understand the rules for their weapons. Mace was also added with special rules for the boxed set.
*The plan is to release the supplement booklet as a .pdf purchase so that players who already have the original RPG hardcover are not forced to buy the boxed set in order to take advantage of the new rules.
Upcoming Appearance:
Mid-Ohio Con: Nov. 6-7
Posted by DPetersen at 1:36 PM 42 comments:

When I was asked to do a House Of Mystery story to be written by Bill Willingham I jumped at the chance. Not only would I get to work with Bill and get some great exposure, but I was looking forward to working from someone's script...something I had never really done much of. I was very lucky, in that Bill wrote the script for me, so the setting and subject matter already fell into my normal range of work. To the right is the page 2 script he sent.

Vertigo was keen to have me thumbnail the entire story in advance. In this layout process, I didn't go into too much detail and, in fact, left the last panel a bit bare. With Bill's note about how many captions and balloons were going to be in that panel, I figured I would deal with filling in when working at full scale.

The pencils shown here a a mix of parts I drew right on the page, and lightboxed sketches I had floating on various sheets of copy paper. Knowing how I was going to handle the roses in panel 1, I felt that I didn't need to pencil the detail all the way across to give the editor a sense of what I was going for in the final inks. I cheated with the herringbone patterned brick work. I made a sheet of the pattern in photoshop and distorted it to different angles and printed them out, using a lightbox to transfer the pattern to the artwork.

Once the pencils were approved, I moved on to the inks. I penciled the page much tighter than I would a Mouse Guard page, so the inks were a very literal translation of what I had drawn already. Areas with patterns were the places I did the most work directly in the ink, like the roses in panel 1, the foliage in panel 2, and the wall and plants in panel 5.

For the colors I wanted to mute the palette but still give a sense of life and light to the garden. I tweaked the greens endlessly on this story, trying to make sure they didn't blend together and didn't have too high a contrast. Adding the color-holds to push the background further back helped me give the garden a slight dreamy state, which fit well with the tone of Bill's script.
The final art appeared in House of Mystery number 7 and was reprinted in the TPB of House of Mystery vol.2.

Legends At NYCC: The plan for this weekend is that Archaia will have a limited advance copies of the Legends of the Guard hardcover at the New York Comic Con (which is odd because this advance will beat out the release of issue 4). This means that not only might you be able to get your paws on a copy if you go to the convention, you will also have the chance to get it signed by: Ted Naifeh, Sean Rubin, Alex Kain, Terry Moore, Katie Cook, Mark Smylie, Karl Kerschl, Joao Lemos, and myself. (according to their sites, all of those creators plan to be at the show in one location or another)