Beneath the Dark Crystal #10 Cover Process

Here is my tenth variant cover for Archaia's Beneath the Dark Crystal series!

This cover, the last in the run to feature Mystics and skeksis, is of UrSu the Wisest of the Mystics and skekSo the Emperor of the Skeksis. Like my other covers these two are the counterparts of each other and paired together facing opposite directions. To the left you can see the finished artwork for the cover, but below I'll walk through the steps I took to to get there. 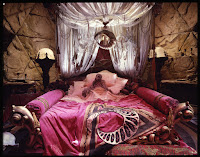 I'll start by saying that the challenge of this cover was that there was no official design for skekSo the Emperor in full skeksis garb. In the film he's bedridden and dying. My editor and I asked Henson for any chance of possible past Froud sketches or even perhaps any insight if skekSo is in the new Netflix prequel series, but they were only able to provide me with photos of the puppet used in the original film and some nice images of his bedchambers to draw inspiration from. So I set out to design The Emperor's costume myself.

Like all the past covers, I drew each character on separate sheets of copy paper. For the Emperor, I tried to use some of his blankets, wall hangings, and tasseled chords to drape him in. I also noticed in the run of drawing these covers that skeksis tend to have some carapace from some beast on Thra as part of their adornment––so I gave him a Crystal Bat collar with the crystal eye acting like an all-seeing 3rd eye for the ruler of those wretched cruel creatures. On his back I attempted to draw something resembling a Landstrider skull, but I'm not sure if I really did that so well.

The Wisest of the Mystics was fairly straight forward as a drawing in comparison, and when the two were drawn, I scanned them and tinted them each a different color when laying them out for the composition to help me see them better.

My editors and I waited, a little worried about the approvals on this one. The others were so inline with the original designs, that I took few liberties (other than trying to work out and interpret details of the costumes)––but here I 'd completely made up the visuals for a main character's look. We all breathed a big sigh of relief when Henson approved.

I printed out the above layout and taped it to the back of a sheet of Strathmore bristol to start inking it on a lightpad with Copic Multiliner pens.

In terms of ink details, I do think this one got a bit more texture than most of the other covers as I tried to help the viewer's eye (as well as my own) understand where fabrics and materials changed as they overlapped and draped the characters.

When the inks were approved, I started on flatting the colors. This is the step where I add flat colors, not worried about the texture and rendering and lighting effects of them, to the characters to establish what parts of the image are which colors.

The biggest challenge here was that I had very little to go on for what the Emperor's color palate would be. I opted to make him a bit darker than I think most of the bedchamber & puppet reference was to make this skeksis the most terrifying looking of them all.

The last step was to render all the colors adding highlights and shadows and texture with the dodge and burn tools in Photoshop while using a textured brush.

This cover marks a transition in the run. I still have two covers to go in the series, but this is the last cover to feature skeksis and mystics, and it was the last cover my Mouse Guard & Dark Crystal editor Cameron Chittock worked on with me before he moved on to a new path with his wife (another former Mouse Guard editor) as they start a new chapter in Boston.

2 covers left to go...time for some gelflings...

A few weeks ago on the return leg of my trip to Finland (my niece is an exchange student there) I did a signing at T3 in Frankfurt, Germany.
It was great to be back in Europe doing Mouse Guard promotion and getting to meet with fans from overseas.

The shop asked me to create a Mouse Guard print that we could sell and I could sign at the event.

To the left you can see the finished piece, but below I'll go through the steps to get there... 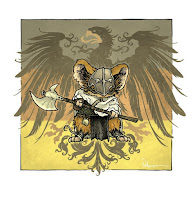 Back in 2007 I visited Berlin, Germany on a signing tour. For that appearance I was asked to create a limited print (hopefully with a German theme since I'd done something similar with aUK theme for an appearance there that same year). Here is that print, with a Germanic armored mouse with the heraldry of the black eagle and the German flag behind him.

I went back to this piece as the inspiration for the new one.

On a sheet of copy paper, I drew the same mouse, this time with his helmet removed and his body language more humble and reverent. It was fun to go back and rework a design from over a decade ago...to pay homage and make slight alterations in proportions, detail, and texture.  The eagle was drawn on a separate sheet of copy paper as I referenced a traditional image of a heraldic German black eagle. In place of the tiny details on the shield in the photo reference I substituted the colors of the German flag.

All of this was scanned and digitally assembled in Photoshop at the proper sizing for the finished print.

I printed the above digital composite of the sketches onto copy paper and then taped to the back of a sheet of Strathmore 300 series bristol.

Using a light pad, I was able to see through the surface of the bristol to the printout underneath to use it as a guide as I inked. To ink the piece I used Copic Multiliner SP pens (the 0.7 nib almost exclusively).

Knowing I was going to use a color hold on the eagle and heraldry, I tried to make sure I left a gap between the inks on those elements and the mouse himself.

After the inks were finished I scanned them into Photoshop. The first step in the coloring process is called 'flatting' because it deals with laying in flat colors to all of the image, establishing what areas are what colors (his fur is orange, the eagle is a grey-brown, the sky is cream, etc...) Most of those colors were already established by the previous print from 2007, but there were still tonal changes to be made.

This is also the step where I established all the color holds (areas I want the ink work to be a painted color other than black) on the eagle, his halo, the flag stripes, and the axe details. 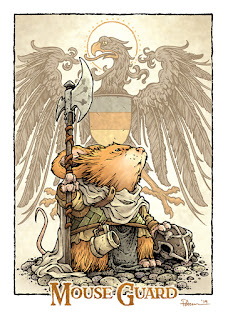 The final step was to do the rendering an adding texture. I did that using a textured brush in Photoshop and the Dodge and Burn tools. The final piece got golor shifted a bit warmer than the flats in the end, and I added 'Mouse Guard' to the bottom for the final print.


Didn't make it to Frankfurt for the signing and you'd like to own one of these prints? Well, GOOD NEWS! I have a limited supply of them in my online store for sale currently:
mouseguard.bigcartel.com

I've made a Creator Commentary video for the sixth and final issue/chapter of Mouse Guard Winter 1152!  Please feel free to follow along in your copy of the story in either issue form of from the hardcover as I talk about the behind the scenes details, art notes, and my head-space as I go page by page and panel by panel. Enjoy!

There has been a lot of news coming out about the Mouse Guard movie being made at FOX by director Wes Ball recently. The cast will all be giving motion capture performances with WETA doing the Visual Effects with filming due to start next month. And speaking of the cast, here is a run-down (incase you missed any of these announcements) of the actors playing the mice: 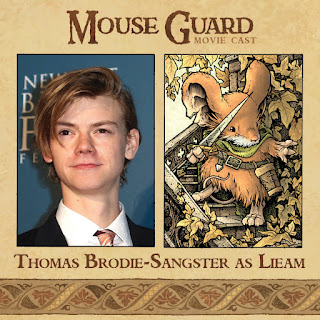 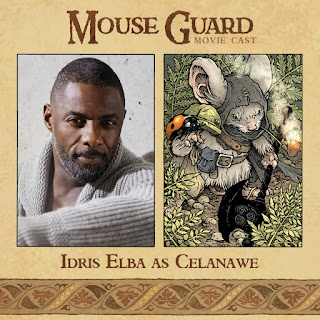 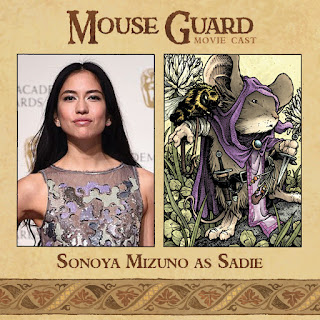 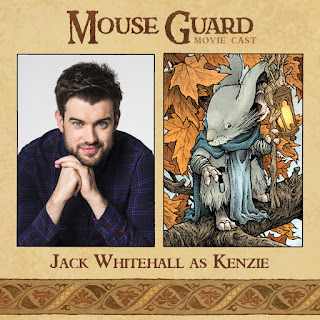 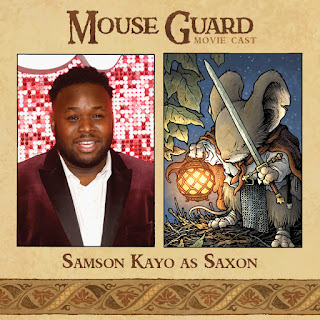 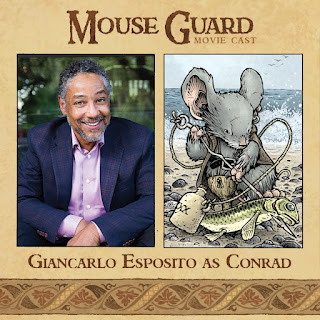 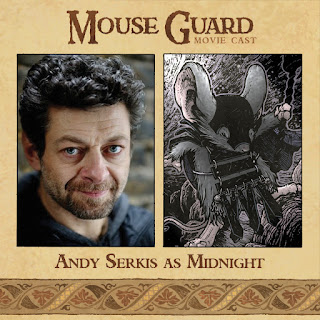 and Andy Serkis as Midnight 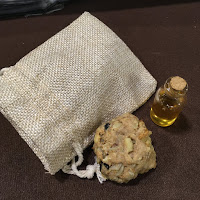 In the hardcover extras of Fall 1152, I mentioned "A dense bread filled with seeds, fruits, and nuts." and I called it 'Gabcroon' (an anagram of a blondie-like desert bar my Grandmother called Congo Bars). I'd always imagined there would be variations of Gabcroon, but the version I'd always wanted to eat was something a bit more like a scone than a loaf of bread...and it would be packed with the fruits, seeds, and nuts to the point of almost being unable to keep it's form.

Several fans have shared with me their own recipes for Gabcroon over the years... 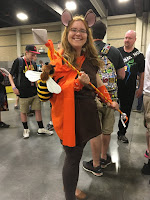 But last year at Heroes Con a fan named Rhomni St. John stopped by my table cosplaying as Sienna with a bee and offered me a few of her home-baked Gabcroon with a little vial of honey.

And they were delicious! I reached out to Rhomni about getting her recipe and she was kind enough to share it. Below are the ingredients and instructions for her version of Gabcroon: 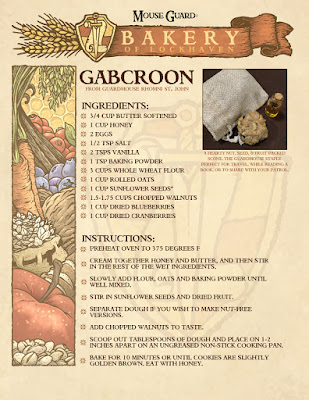 Do you have a Gabcroon recipe of your own? Please share your results of this or your own recipe and I'll do a follow-up blogpost with the results!