I've finished all the toned paper commissions from HeroesCon and a few pieces I took to SDCC: 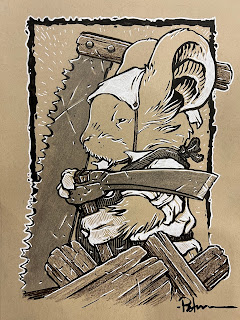 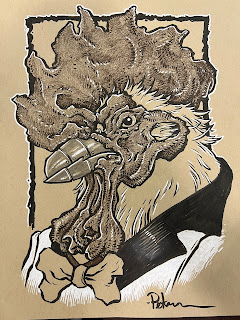 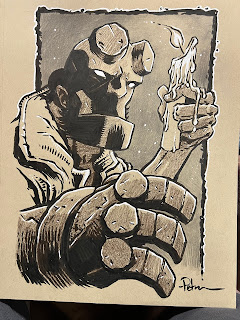 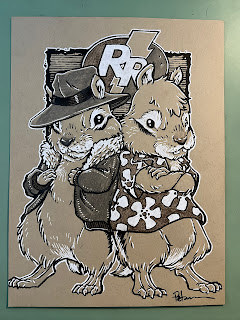 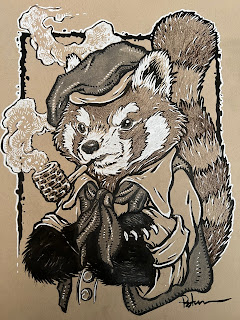 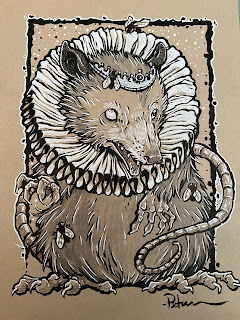 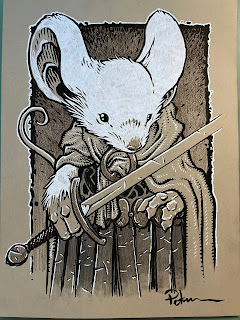 Gwendolyn with a sword 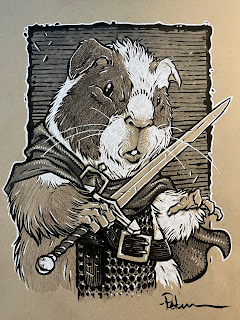 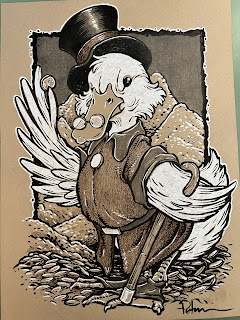 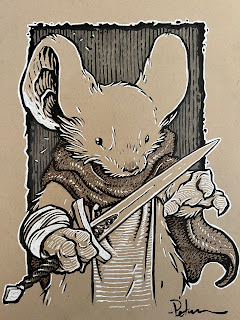 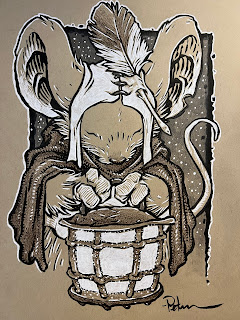 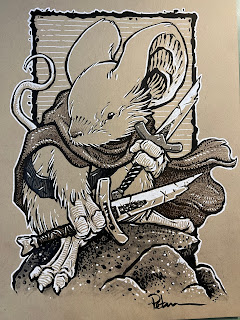 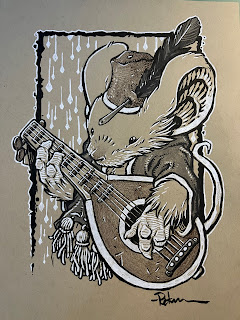 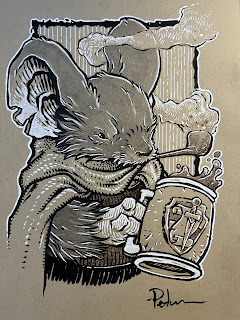 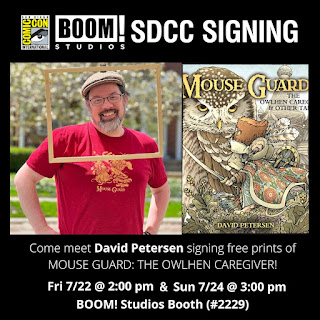 I will be at SDCC Friday through Sunday, but will not have my own table or booth.
This was a last-minute decision due to my Eisner nomination

You can find me at the BOOM! Studios Booth
Friday at 2pm and Sunday at 3pm.
I will be signing books & comics
as well as a free poster for the Owlhen Caregiver story (nominated for an Eisner)
I'll also have original art with me.
If I can add more signings or stay at the booth for longer, I'll try to share info on Twitter: twitter.com/mouseguard
Posted by DPetersen at 9:00 AM No comments:

A few months ago I listened to the audio book 'Who Censored Roger Rabbit' by Gary K. Wolf, and while it's very different from the Robert Zemeckis movie, it got me in the mood to draw some Roger fan-art.

I auctioned off the original inks for charity (the amazing World Central Kitchen by Chef José Andrés: wck.org) and then just as a coloring demo on my Twitch channel I colored a scan of the art.

To the left you can see the final colored piece, but below I'll go through the steps. 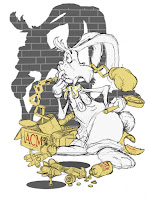 When the movie came out I played the hell out of the DOS game. For the final level Roger must navigate the ACME warehouse and grab various gags to use to get past obstacles and to force the weasels to laugh themselves to death. The game came with a copy protection item that was a paper acme catalog with all the gags and joke items listed as though they were real (and then after the 1st stage the game would stop and ask you to look up a price or fact on a certain page).

For the rough for this piece after I'd drawn Roger, I wanted to include a bunch of those gag items from the game like: The boxing glove mallet, shrinking pills, rocket roller skates, portable holes, a screw ball, exploding cigars, extra sticky glue, and I also threw in Marvin Acme's will. These were all composited together with a brick pattern shadow in Photoshop.

With the pencils/roughs done I printed out the above version and taped it to the back of a sheet of Strathmore 300 series bristol. On my Huion lightpad I was able to see through the surface of the bristol to use the prinout as a pencil guide to ink from. I used Copic Multiliner SP pens (0.3 & 0.7 nibs) to ink the piece.

I wanted the inks to be as clean and readable as possible since they were the item going up for bidding for World Central Kitchen. The brick shadow became such a big and dark shape in ink, I didn't go as far with the texture on Roger as I'd planned, but I think the restraint helps as he's normally so cleanly outlined for animation.

The next step was to get a high res-scan and start the coloring process (though I did the coloring bit months after the auction ended and the recipient had the original in-hand). I didn't want black inklines on this, so I did a color hold for the whole piece (areas where I want the black ink to be a color other than black) to make it more sepia. Then I added in flat colors for Roger and the gag items per their established hues, but I certainly muted them a bit to make it all look a little softer and more old fashioned.

Here again is the final color art after I'd rendered it: 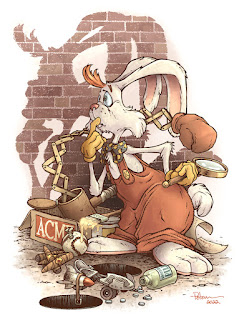 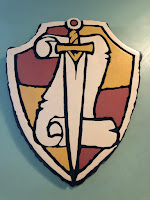 What started as an idea to dress up my convention table set-up has become a semi-permanent wooden sign attached to the door to my office. I'd recently watched several YouTube videos about making these types of trade signs for businesses or hobbyist workshops. My original plan was to also make each individual letter of the 'Mouse Guard' logo and string them all together on a piece of natural chord that could drape along the front of a convention table. But I abandoned the lettering idea because of the extra work, the fear they would be easily damaged at cons, and the added weight/space to get them all in my luggage.
Below is the process for making the sign (and I'm sorry I don't have more in-process photos) 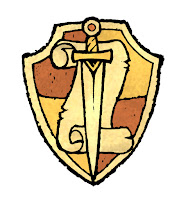 The original emblem design wasn't even created until recently--this didn't exist when I was drawing Fall, Winter, or Black Axe. It came about because when the movie was still in production, I was asked by the director Wes Ball if there was a emblem or sigil the Guardmice could have that would act as a symbol like a sherif's badge that could also double as a stamp for a wax seal. I wanted it to include the 3 tenants of the Guard: Swords, Defense, & Diplomacy (Saxon, Rand, & Kenzie). The outer shield gives the defensive element and forms a nice emblematic silhouette, and the sword & scroll fit inside nicely. I went with Gryffindor hues because they are my go-to most appealing when I started adding color. 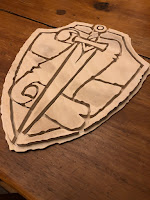 I printed the emblem out at 10.5" wide X 12.5" tall. I had to print it in halves, and then tape the two sheets together to get a full symbol. And I did that process twice so that I had two paper emblems. One was spray mounted to a thin sheet of birch craft plywood and the other to a thicker sheet of 3/8" thick birch plywood. On the thinner sheet, I used the paper to guide me in cutting the outer contour. On the thicker piece, I cut out each section of the design, eliminating every bit of black outline around the shapes.

When I had every piece cut, I remove the paper printout, sanded it all smooth, and glued the thicker parts to the thinner backing. 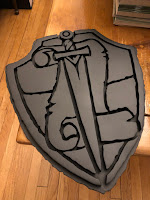 When the glue was all dry, I gave the whole piece several coats of primer. I started with a grey automotive primer that it a little thicker than most. It's good for quickly covering the imperfections in the grain. Of course, I needed to sand in between each coat, so the piece got smoother and smoother as I went. This took enough coats, I lost count how many I did in total.

I do remember that my last two coats of primer were a black primer. I'd run out of the grey primer and the black primer I bought to replace it killed two birds with one stone since it was both a thinner primer AND would provide the darker tone for the gaps in the design. 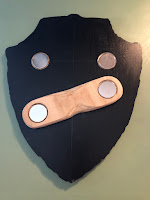 To mount it, I wanted to abandon the string idea and decided instead to employ some large magnets I already had. Using a forsner bit I drilled circular depressions in the backing the same depth as the thickness of the magnets. I then made a corresponding plywood piece to give the same treatment. This way I can essentially clamp the emblem onto the front drape of my convention tablecloth.

The magnets are strong enough they support the emblem to stay up on the thinner panel of my office door already.
The last step was to paint the top flat surfaces of the design the correct colors. I used acrylic paint tubes and a foam chisel brush to slowly apply the paint until I had good coverage without too many brush strokes. 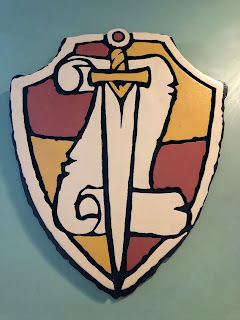