About a month ago I shared the process for the first Legends of the Guard Vol.3 cover...today I'll share the process for issue 2 of that series. I've been asked why in Mouse Guard I've never really shown other mouse-sized mammals with societies....why no chipmunks or squirrels. To be honest, I'd only left them out because of my wanting to focus on the mice...but decided that someday I'll need to fold them in and explain their absence in the books-so-far. 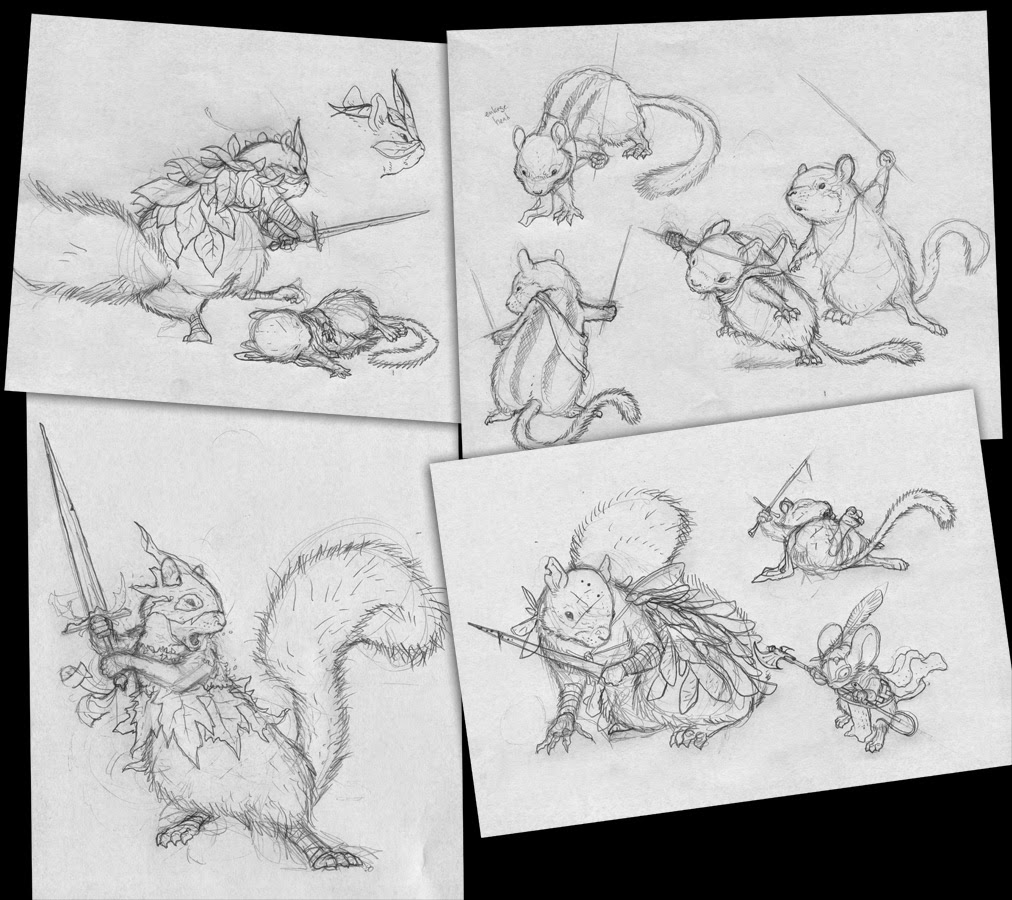 While I'm not ready to explain all of that in a single cover, or even reveal what the story of this covers is, all you need to know is that I thought it would be fun to show 1 mouse who joined the fray of a battle between chipmunks and squirrels (who I've now decided had some long-standing feud). Referencing photos of those species, I did drawings of the players involved on various sheets of paper. Jeremy Bastian & Jay Fosgitt helped me with a suggestion squirrel 'armor'. I'd originally sketched it in as cloth, and they mentioned using found objects like leaves would be cool.

I scanned all of these characters and, in Photoshop, arranged them into a composition. This arrangement took some time. I'd drawn several of the character imagining which counterpart they square off against...in some cases I was able to do that, but in others I couldn't puzzle piece it together that way. Also the squirrel who I thought would be on the cover, ended up being the taller one on the back cover. But it was all to serve a greater layout and composition with room for the logo and keeping in mind where the crease marking the front and back cover lay.

The composition is then printed out (on two sheets of legal paper and taped at the seam) then taped to the back of a sheet of Strathmore 300 series bristol. I ink the piece on a lightbox where I can see the printout through the bristol. I use Copic Multiliners for the inks. I added in the tree branch as well as the leaves (loosely in pencil 1st, then with ink) as I worked on the cover. This cover has a lit of the same kind of lines for almost every detail, so thick and think outlines and densities of those marks help establish one form from another.

After inking, the piece is scanned to begin the coloring of the piece. In Photoshop I use flat colors (not the final color choices) to establish where one figure ends and the next begins, where the clothing  varies from fur and even from other adjacent clothing. Putting in these flat placeholder colors is called 'flatting' and it amounts to an exercise less bout artistic choice and more about the technical of coloring in the lines.

For the final rendering of the cover, I honed in on the final colors and started rendering. I'd not planned on making the squirrels grey squirrels...but since the chipmunks were all brown and much of the squirrel clothing was going to be earth-toned, I needed to give them some other hue to contrast. The rendering was achieved not through the paintbrush tool, but using the dodge (lighten) and burn (darken) tools.


Legends of the Guard Vol.3 #2 will have the full "legend" of this cover on the inside front cover. And will feature stories by: Dustin Nguyen, Nicole Gustafsson, & Kyla Vanderkulgt

Legends of the Guard Vol. 3 #1 in progress preview

For this week's blogpost, I'll be sharing some previews of in-process work for Legends of the Guard Volume 3 #1 (in Previews this month: Order Code JAN151140). To the left is my wraparound cover for the issue (process post on that cover here). The issue will also be a first for Mouse Guard with variant covers from Humberto Ramos, Ramon Perez, & Eric Muller...but I'll share more on those as we get closer to release. Below are process pages for the three contributors for this issue:

Mark Buckingham:
I chose Mark to be in Legends for obvious reasons. Besides his talent and a delightful person, the body of work he's most known for is Fables which features all manner of talking animals. Mark and I chatted about what he'd like to do for a Legends story sometime early last year, and then again at Baltimore Comic Con towards the end of 2014. I seemed to recall Mark saying something in our earlier talk about doing a story with a goose, at Baltimore, he didn't remember saying that, but liked the idea of drawing a goose. Mark added

"The reason David and I discussed using a goose in my story was due to my inclusion of a goose in medieval costume in the illustration I did for the Fabletown and Beyond Convention poster/T-shirt design, which I remember David telling me he was quite fond of during the show.

I took inspiration for the story title from the Anthony Phillips ( the original guitarist of Genesis) LP "The geese & the ghost" (1977) which has long been a favorite of mine, with beautiful artwork by Peter Cross (Anyone familiar with my work on Fables will immediately spot his influence on me)."Below are Mark's pencils, inks with inkwash, and final art colored by Lee Loughridge for his story The Gosling and the Ghost." 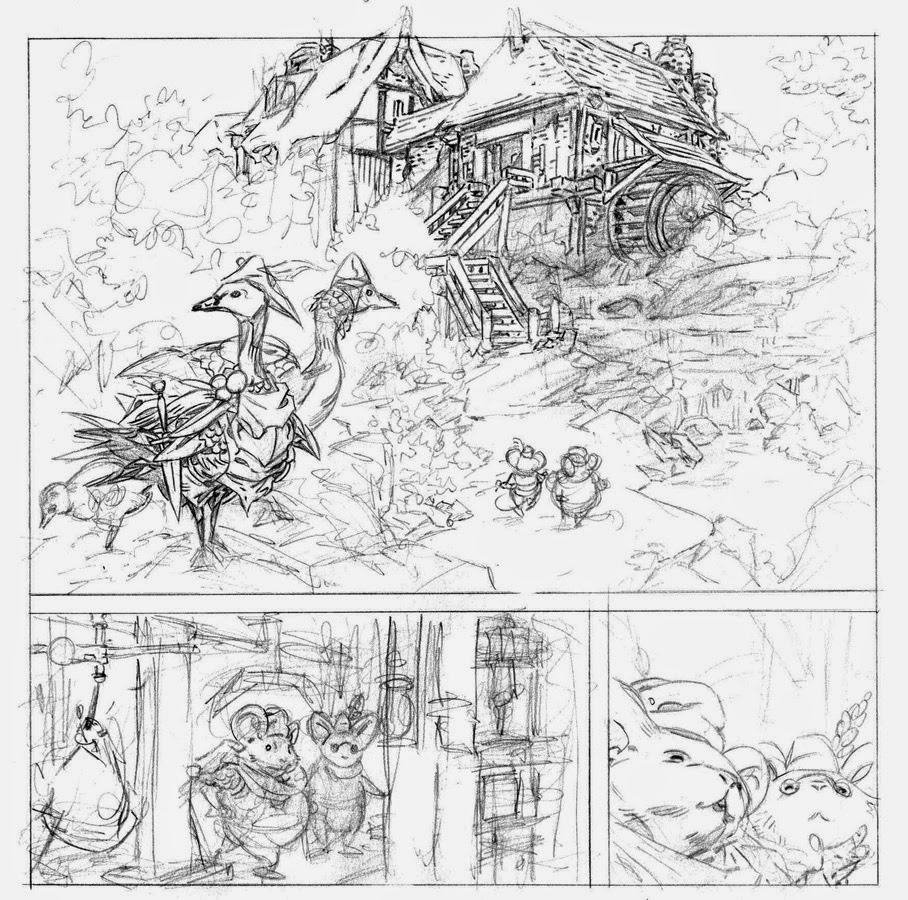 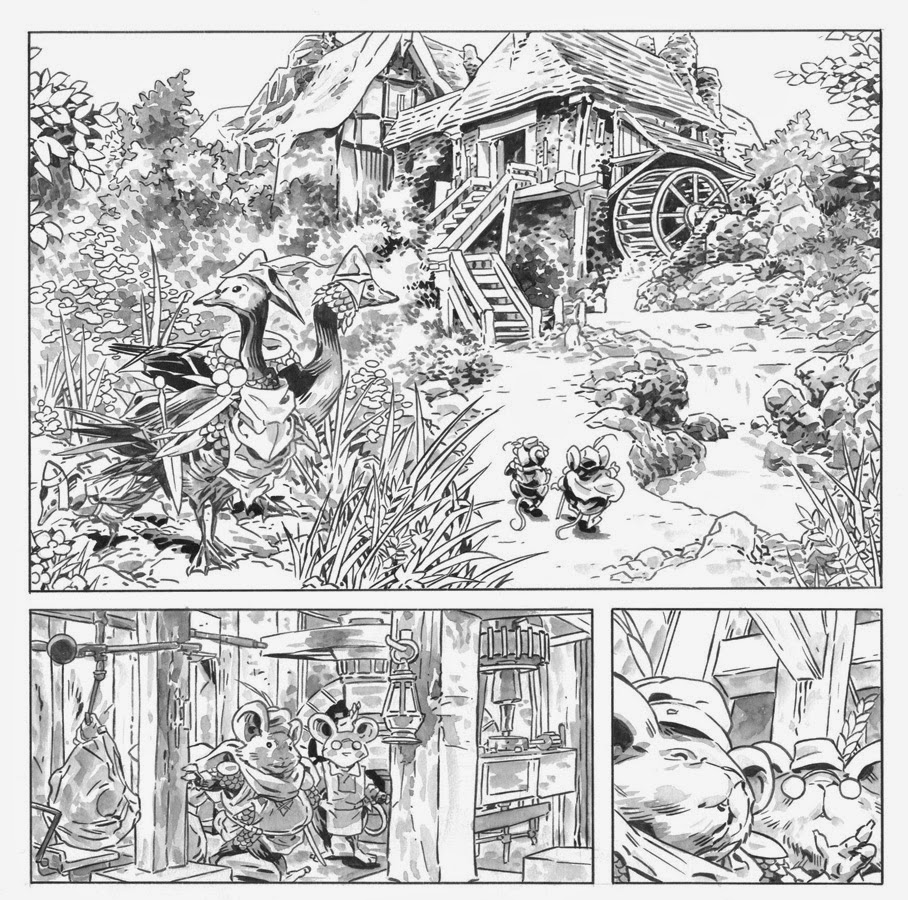 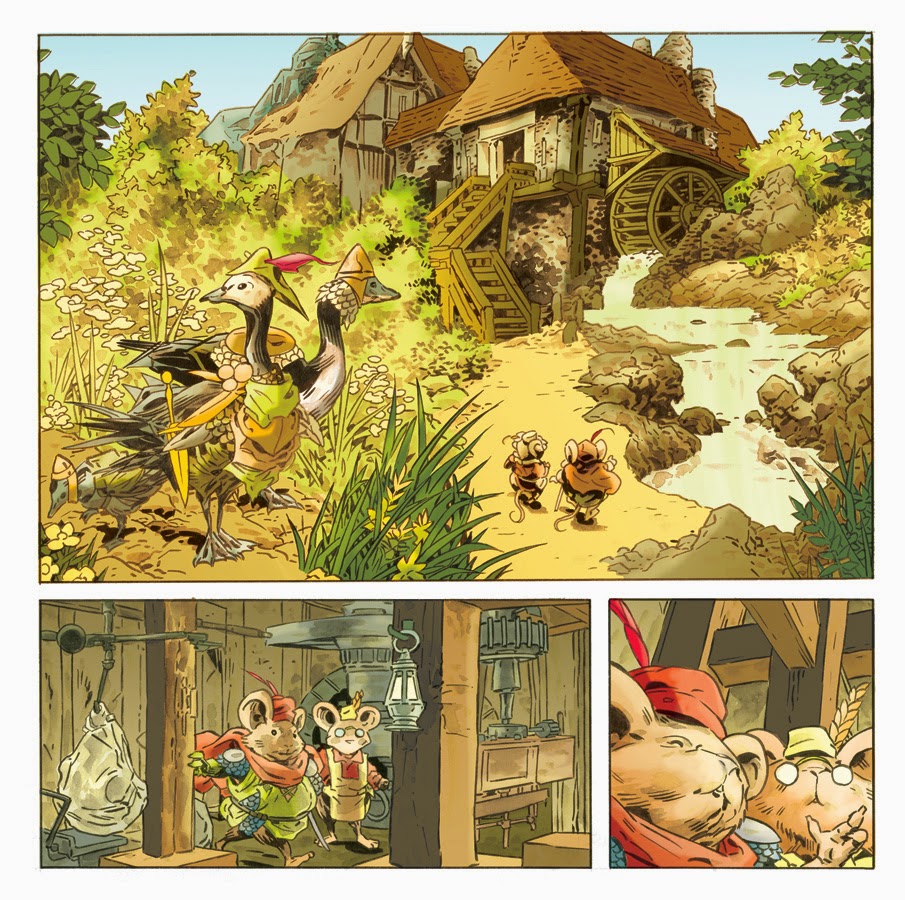 Hannah Christenson:
Hannah falls in to the category of artist/storytellers who are not "names" but do work worthy of much larger attention. I first saw her work online (Hannah's Blog) and kept her in mind as someone to tap as a Legends artist at the first opportunity. After drafting up 5 (!?!) different pitches for Legends, I asked her to pick the one she would be most excited about drawing (since they were all good). Hannah had been taking some blacksmithing classes with her husband and chose to do her pitch that involved a blacksmith for her contribution The Armor Maker. Below are her digital roughs, inks, & colors. Hannah Added:

"Ever since I was a little girl I loved armor, warriors, and knights, and I'd even told my mom I wanted to be a blacksmith when I grew up. I also love stories about "side characters" or the support people outside of the traditional hero who sort of rise up and help in a way they thought was beyond themselves (thus becoming one of the heroes, I suppose).

The process was really awesome on my side of things, from pitching all the stories to working on last edits. I loved all the stories I pitched but I had hoped to get to do this one. I really like armor. " 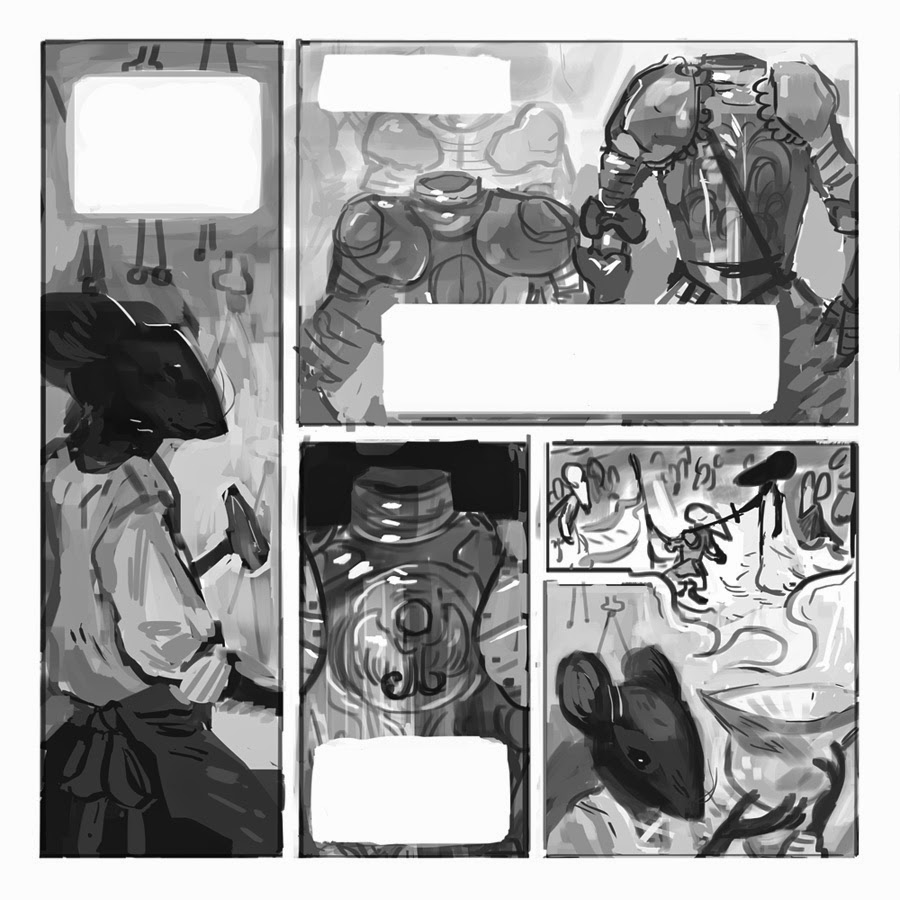 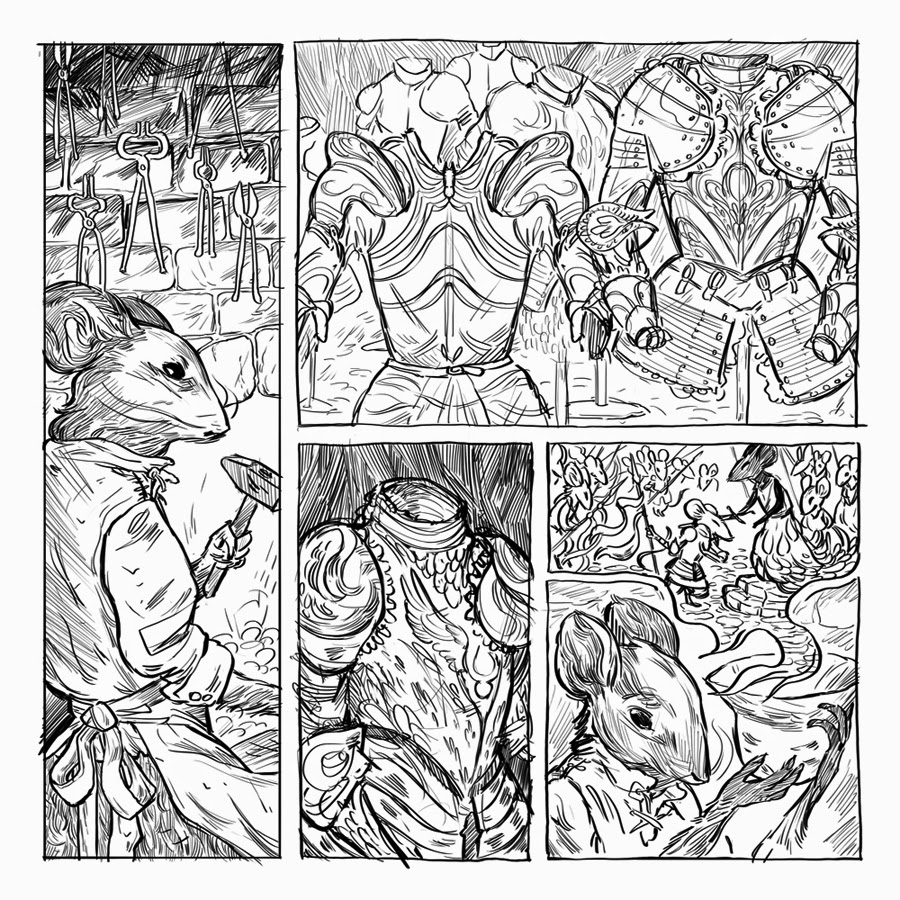 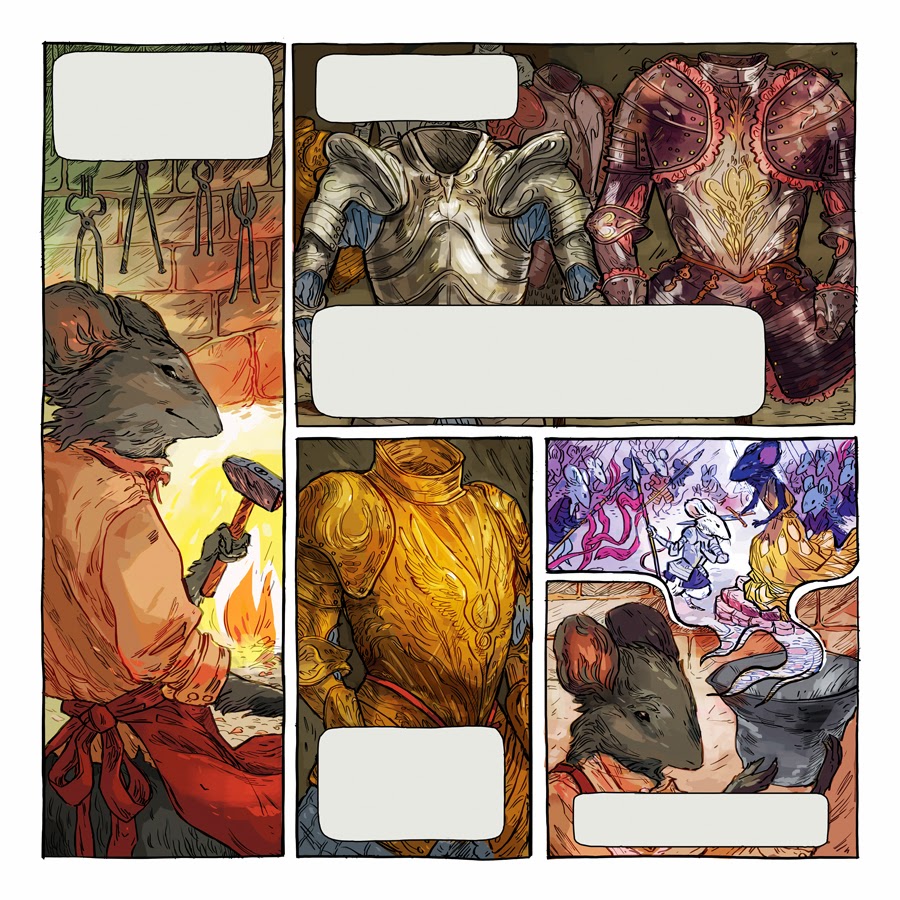 Skottie Young:
Skottie had originally been tapped for Volume 2 of Legends, but due to a communication error, we thought he was unable to contribute. But we are correcting that with this volume. Skottie loves folklore..so much that his first creator owned series is all about fairy tales (more info about it here)
I don't want to share too much of Skottie's story yet, but it draws from his real life experiences with fatherhood and the wonder of a child. Below are the inks to Skottie's 1st page as a well as a Mouse Guard Daily Doodle of his from back in 2011. 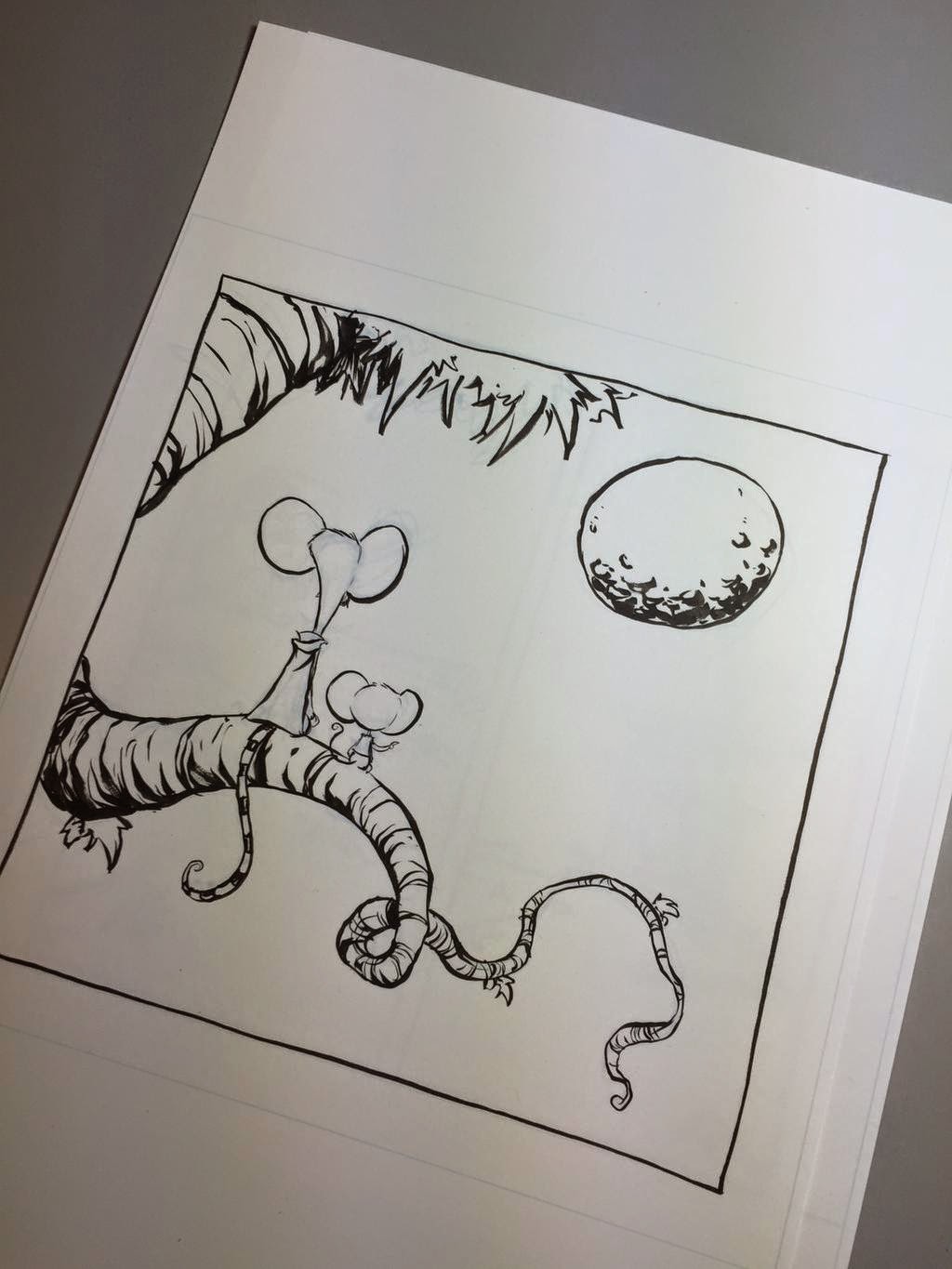 My pages:
I'll be linking the stories together through the storytelling competition at the tavern. So I've been working on designs for the storytellers/inn patrons as well as dusting off my model of the June Alley Inn so I can get my pages turned in on-time. 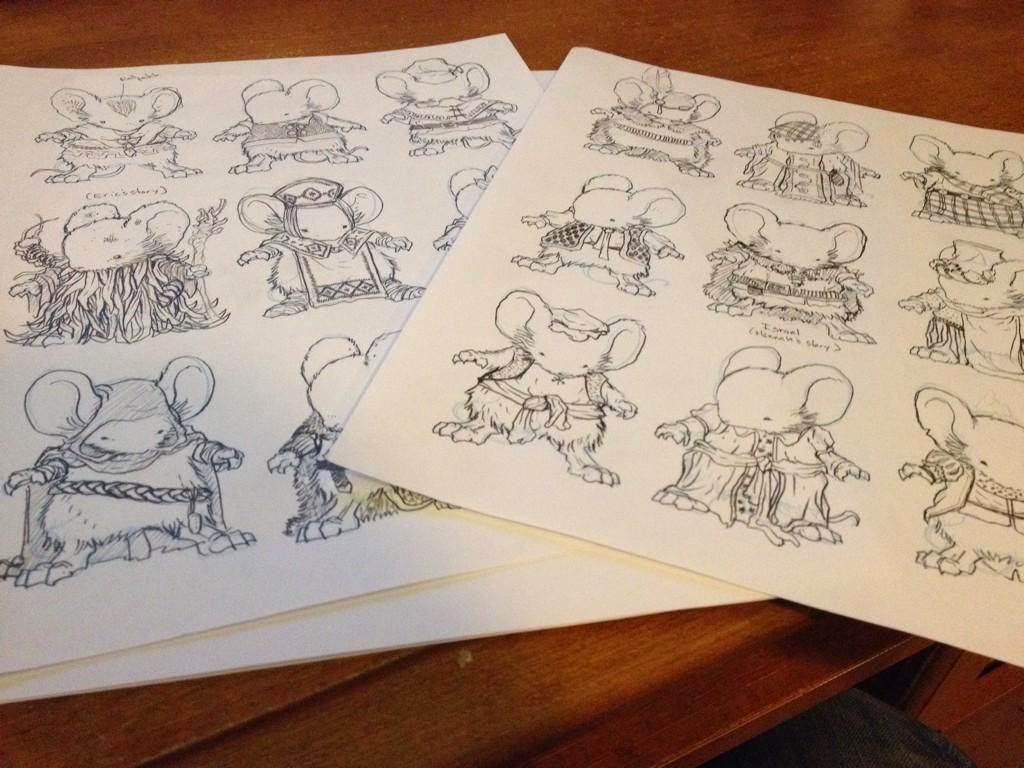 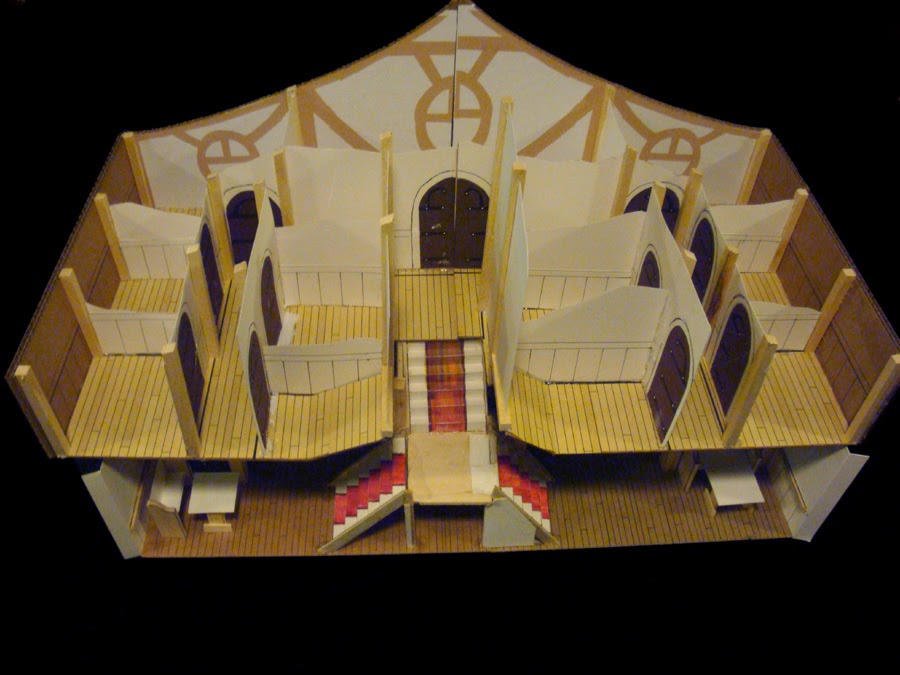 For this week's blogpost (and 3 more to follow) I colored a inked Mouse Guard character portrait in my normal fashion in Photoshop. I recorded the process and speed up the result x8. Here is the video: 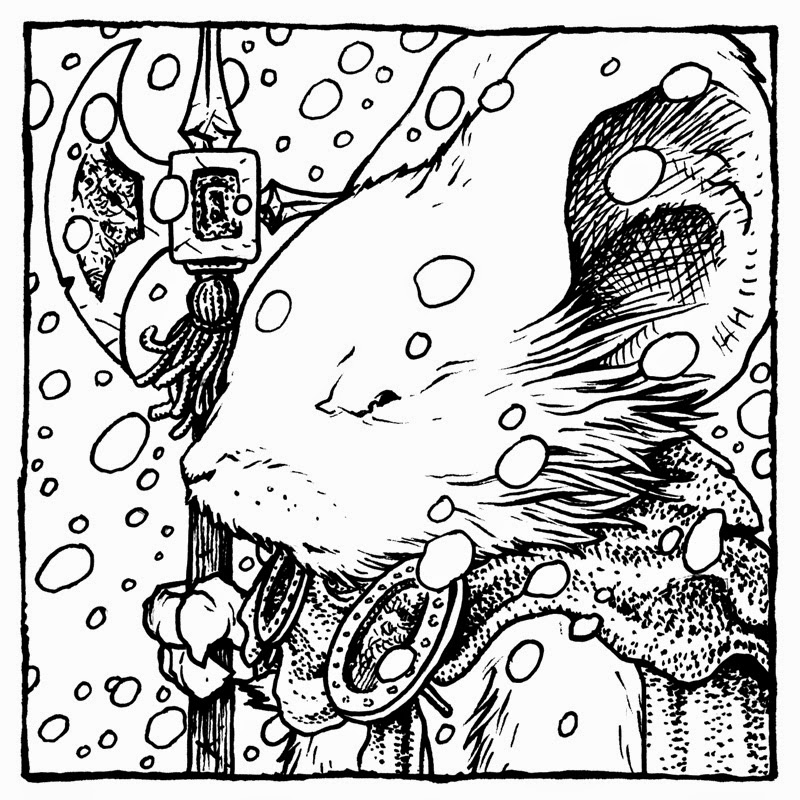 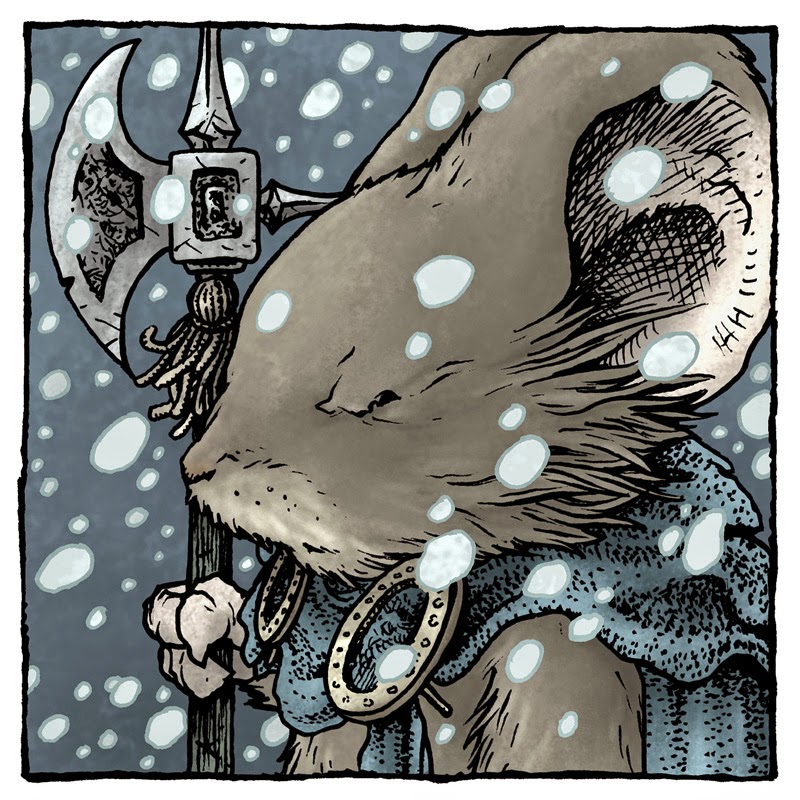 For this week's blogpost (and 4 more to follow) I colored a inked Mouse Guard character portrait in my normal fashion in Photoshop. I recorded the process and speed up the result x8. Here is the video: 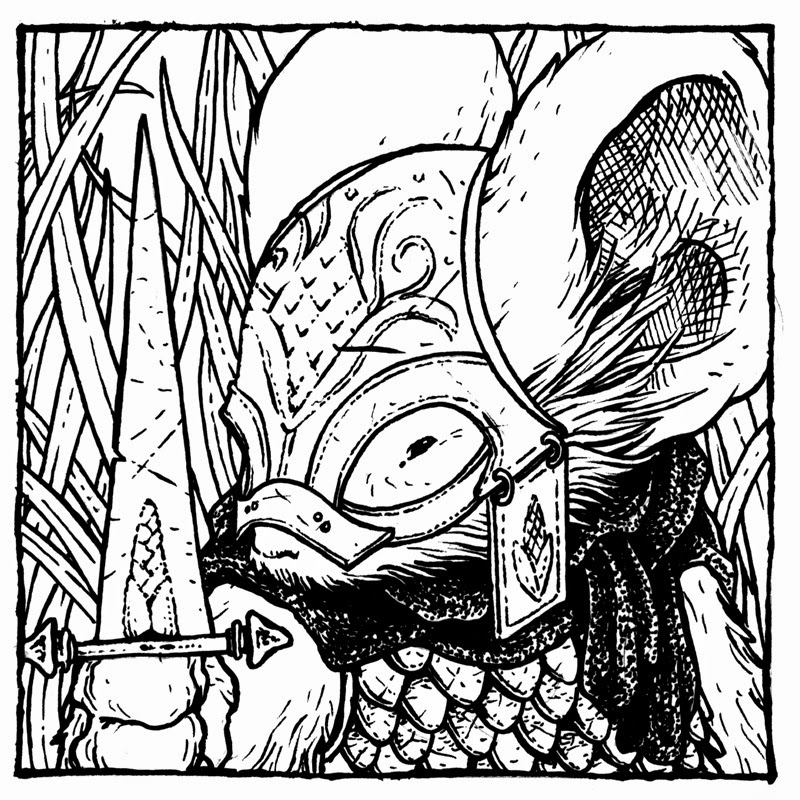 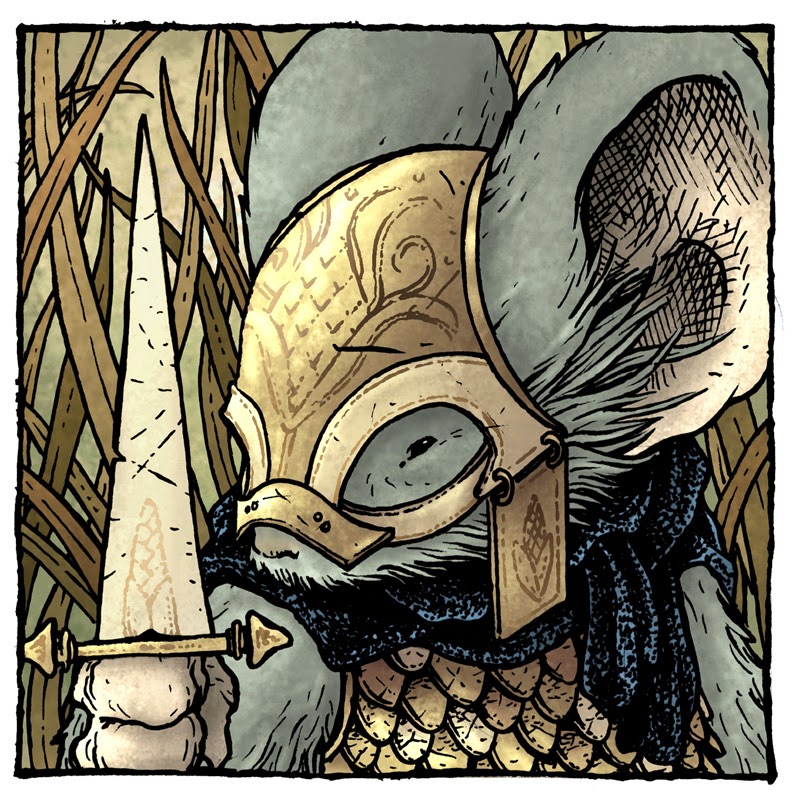