I've made a Creator Commentary video for the first ever issue of Mouse Guard. "Belly of the Beast" was originally self-published in black and white and was later picked up by Archaia for publication in color as the first in a six-issue arc called "Fall 1152". In the video below I go page-by-page and panel-by-panel to share behind the scenes info, thought processes, points of interest, and art details. Enjoy! 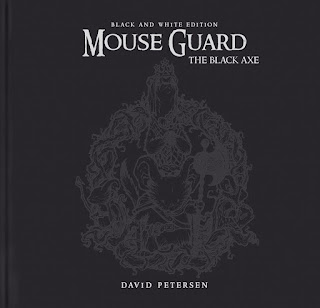 The Black Axe Black and White Edition is coming! This is a 12" x 12" (original art size) hardcover printing of the Black Axe issues (which is as close as you will ever get to holding all the original art for Black Axe at once) with vellum overlays included where I inked weather effects separately all packaged together into a lovely slipcase. This edition of 1,000 will be signed and numbered.

This book is currently being solicited by Diamond for a May release with ORDER CODE: JAN181333 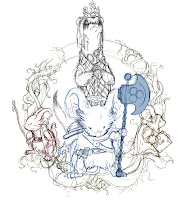 For the cover art (which is debossed into the cloth cover) I sketched up Celanawe flanked by Conrad & Em encircled in a briar wreath with King Luthebon looming over them. I drew the characters all separately on copy paper and then scanned them into Photoshop. Each character (and the wreath) were on different layers and tinted differently to help me move, resize, and compose the image. 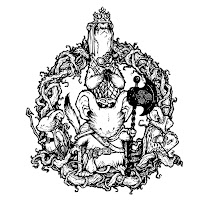 Once I had the layout done, I printed it out and taped that to the back of a sheet of Strathmore 300 series bristol. Using a lightpad (I use a Huion) I could see through the surface of the bristol to the printout and use it as a guide to ink. I use Copic Multiliners for the inkwork (the 0.7 & 0.3 nibs mainly). Because this image was going to be debossed in cloth, I couldn't go too crazy with details, textures, and cross-hatching...but the wreath still got a little dense with linework despite my best efforts.
Luckily, the artwork will also be reproduced on paper inside the book itself.

Speaking of the book, here is a sample of a few of the pages as they appear in the
Black Axe: Black and White Edition: 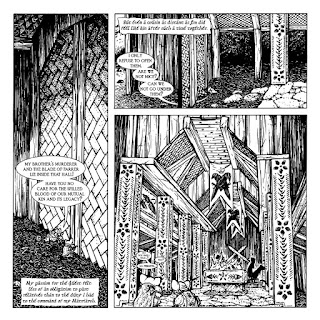 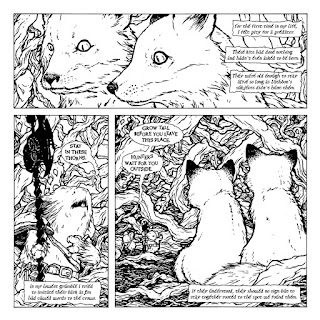 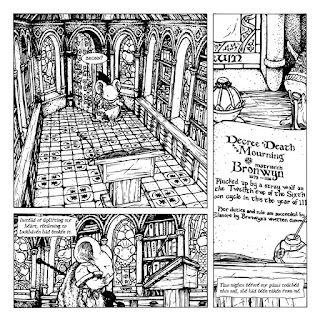 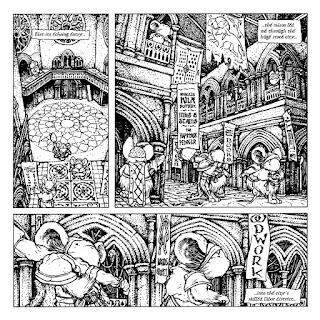 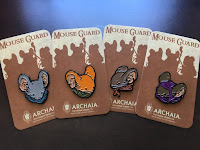 Pins were something fans had been asking for, and the watch was a suggestion of Jose Meza over at BOOM! And now, you don't have to be at a convention to purchase these ways to show your Mouse Guard fandom 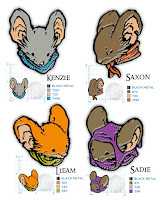 Currently there are four character portrait pins (Kenzie, Saxon, Lieam, & Sadie). To the right you can see my original inked drawings with the pantone colors added in and with scale reference for each pin.

Below is a better look at each character's actual pin. Each pin is $9.99 and you can order these pins online from: https://shop.boom-studios.com/merchandise 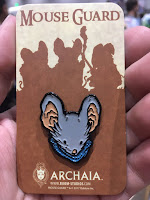 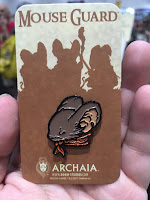 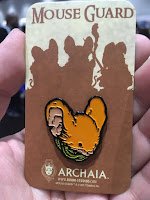 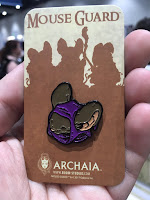 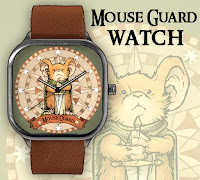 For the new Mouse Guard watch, I designed a completely new image for the face featuring fan-favorite Lieam. This watch has a stainless steel backplate with gunmetal case and a leather strap.
It sells for $75 and can be purchased online through the BOOM! online store: 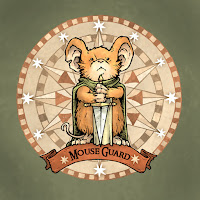 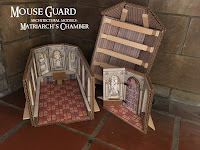 In The Black Axe story, I explored a new room just off of the Matriarch's Office (a public room where Guardmice are welcome to confer with their leader)...A chamber only to be accessed by the Matriarch of the day, and full of the passed down knowledge, writings, and artifacts of the previous Matriarchs. In the video below, I share the model I built to design the space and reference it as I drew the pages.

2018 Convention Appearances To Be Announced Soon...
Posted by DPetersen at 9:00 AM No comments: 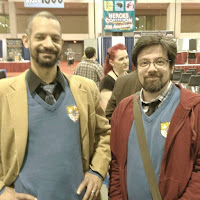 "Two artists, David Petersen and Jesse Glenn, went digging through stacks of old original drawings and story ideas from twenty plus years ago with the thought, "What would these characters be like if we were working on this project today?"

Below we have the first half of season one available to watch here or on YouTube.

Three accidentally evolved anthropomorphic cats and their raccoon adoptive brother-mentor survive without being seen by society in our 1991 homage to everything we loved about the old TMNT comics. 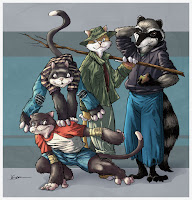 David's rooftop vigilante high-school comic book later ego with karmic powers of luck, after all, you don't want a black cat to cross your path...

Our desire to do a colorful team with mythic mounts that joins together to form something more powerful than themselves in homage to shows like Voltron & Power Rangers is the subject of this episode where we focus on the human characters, 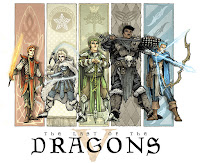 
Our Voltron-Power Ranger homage wouldn't be complete if the heroes from the previous episode didn't have their larger-than-life legendary beasts to ride, and so the namesakes of the project, the Dragons themselves are featured in this part 2 episode. 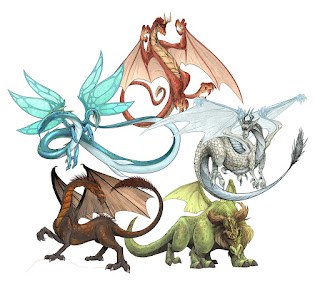 Updated versions (Above: Petersen, Below: Glenn)

We are taking a mid-season Hiatus to get ahead on the rest of Season one. Here is our announcement and promo about it as well as teasers for the rest of season 1:

BONUS!
Here is our panel from the Baltimore Comic Con where we go over revision types while looking at 10 different Plotmaster concepts: 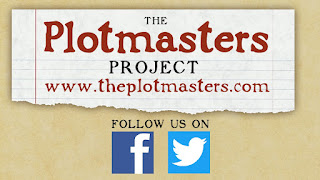 2018 Convention Appearances to be announced soon...