For the upcoming TMNT Macro-Series, I was asked my IDW & editor Bobby Curnow to do 4 new Turtle covers, one per bandannaed brother. I've done several TMNT covers before:

You can see the final cover artwork for the Donatello Macro Series cover to the left, but bellow I'll go through and talk step-by-step about the process to get there.

I was given an outline of what happens in the issue, but also given the freedom to do something unbound by the story in a 'classic' feel. I decided to take a theme of that issue (not a specific moment) of Donatello in his sewer workshop and then do my best version of how I see him in that environment...both in solitude, and also in his heaven. The shop here is a combination of my Dad's basement workshop when I was a kid and my own from that same time: glass jars of screws & nails, oxy-acetylene tanks for welding, broken old cabinets as shop storage, am/fm radio on it's last legs, milk crates for seating and storage...It's my childhood of being a maker all for Don to use.

Inks:
Luckily there were no changes requested! I printed out the above digital composite layout and taped it to the back of a sheet of 300 series Strathmore bristol and inked it on a light pad. Here I had to dive into all those details. The wire nuts the grime and corrosion on the pipes, the handles of the tools on the peg board...AND some easter eggs: the Mythbusters sign, a Cats Trio poster, a scissor sheath I made for conventions, a Usagi Yojimbo chop sticker, copies of the art of Mouse Guard, Locke & Key, A Brief History of Time, How Things Work, the Pocket Ref, a book with 'Eastman & Laird', then Adam Savage's custom leatherman holder, and Michelangelo's nunchucks. WHEW!!!

Color Flats:
After the inks were finished and approved, it was time to add color to this compositional detail-mess. The first step of coloring digitally is to lay in flat colors for each area of the piece. Defining that the area of Don's skin is all the same color, which is a different color than his front shell, his pads, or his bandanna...as well as all the other piles of stuff I crammed into this piece. Having these areas be established as flat un-rendered color allows me to quickly isolate those areas as I do the real work in the coloring quickly. Sometimes I flatted in colors for corrosion, like on the pipes...but I didn't on the vice or drawers. That's because I knew I'd have a harder time with the pipes getting that balance just right, so being able to re-isolate them with the flats is prep work that pays off. *note: looks like I didn't save this 'flats' image before I'd already started rendering the milk crates..

Colors:
Here again are the finished colors with all the effects added for the color holds (areas where I wanted the black inkwork to be a color other than black), the glow and lighting effects for the torch and lamp.  This piece was hard, and the most difficult TMNT cover I've ever done...but it was also very personal to me. I recreated everything I loved and remembered about my childhood basement growing up, all the tools, the resourcefulness of using junk cabinets for storage, old doors for table tops, jars for parts, and milk crates for everything.

The Donatello issue of the TMNT Macro Series will be released in September.

Beneath the Dark Crystal Variant Cover #2

My second variant cover for Archaia's new Dark Crystal series "Beneath the Dark Crystal" is the subject of this week's blogpost. Last month I shared the process for the first cover featuring UrZah the Ritual Guardian & skekZok the Ritual Mater. To the left you can see the finished cover art with UrSol the Canter & skekSil the Chamberlain.


Below I will go through step-by-step the process for creating the cover art. 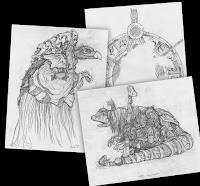 Using reference provided by Henson as well as the art book "The World of the Dark Crystal" by Brian Froud, I started by drawing the profiles of the Skeksis and Mystic for this cover. Chamberlain is my favorite design of the Skeksis, and I loved trying to capture the sly-up-to-no-good smirk sculpted and articulated in the puppet. Because the Mystic counterpart for Chamberlain is the canter, I drew his neck and head and mouth to evoke the feeling that he is sustaining a long note. Like my previous cover, the layout idea is to overlap the figures facing opposite directions to pay homage to the idea from the movie that these were once the same being. The circle design was a straight lift of one of Froud's designs, but traced over in my pencil to try get some of my linework in the background.

Once the pencil sketches were scanned, I played with them in photoshop to get the layout just right. each scan/element was tinted a different color to help me make sense of it all. At this stage I can not only move the drawings around, but also re-size them if I drew one of them too big or small. Chamberlain's neck and head needed some adjustment to get that evil look across, so I moved and rotated it a bit digitally.

With the layout completed, I printed out the image at cover size (roughly 10" x 15") onto two sheets of printer paper. I have to tape those piece back together to be one image, and then tape that (using painters tape this time) to the back of a sheet of Strathmore bristol board. Using a lightpad, I'm able to see through the surface of the bristol to the printout to use it as a guid as I ink.

I used art/tech pens from Copic called Multiliners and I used the 0.7 & 0.3 nibs mainly. I streamed part of this cover live on Twitch as I worked (but did not record the process).

The inks were then scanned and imported into Photoshop where I started the coloring phase with a step called 'Flatting'.

This is where the various color areas are established: "Where does the color of the Skeksis robe end and the back cloth begin, what parts of the Mystics patterned clothing is which color and where?" It's a techincal version of adding in flat color and staying in the lines.

I also added in color holds (areas where I want the inkwork to be a color other than black) to the background circle pattern.

The last step was to render the piece. Add in all the light and shadow and subtle color-shifts. I use the dodge and burn tool with a textured brush to do most of my rendering.

The inked overlay design was also added in here with a bit of Photoshop magic to make it a bit translucent.

At conventions I do toned paper commissions. I wish I had the time to have these open year-round or for people who can't make it out to my convention appearances, but when I'm home, I have other work & obligations that prevent me from doing so. Here is a look at my most recent batch: 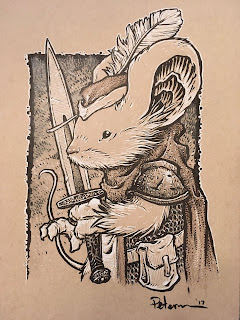 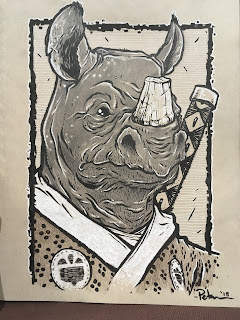 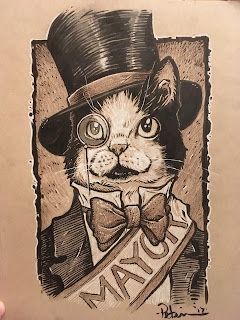 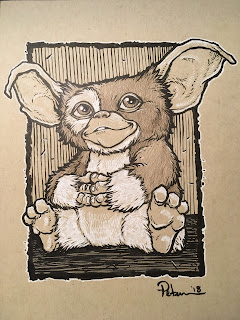 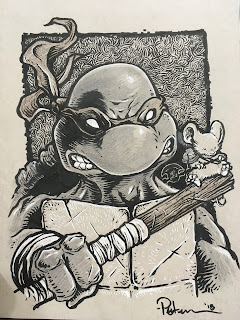 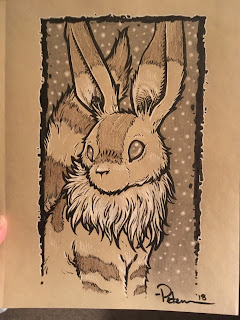 A Fox Squirrel from Studio Ghibli 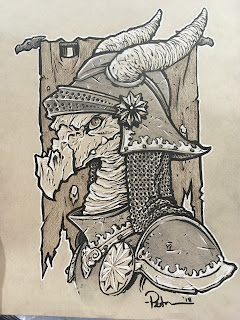 A Dragon in Armor 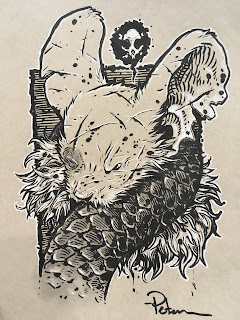 A Guardmouse beat to hell 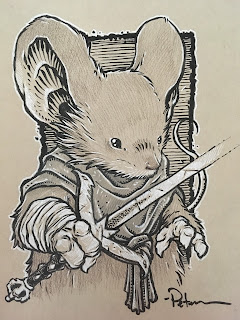 A Guardmouse with a sword 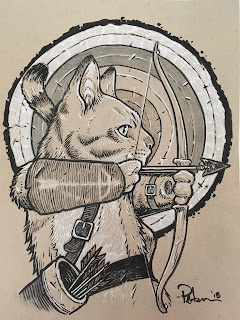 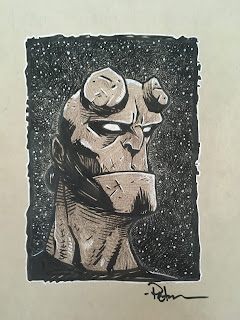 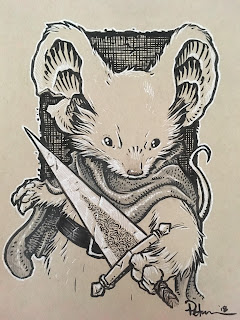 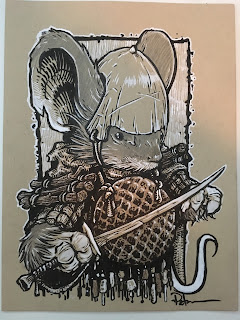 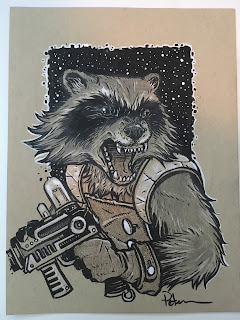 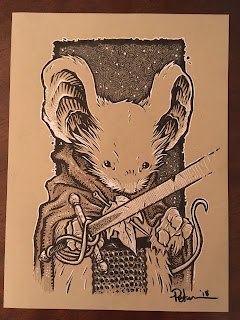 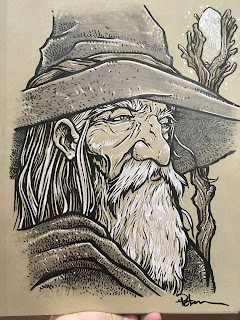 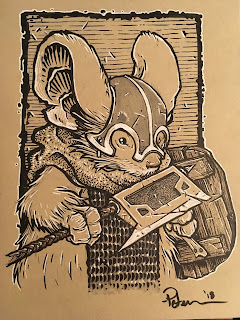 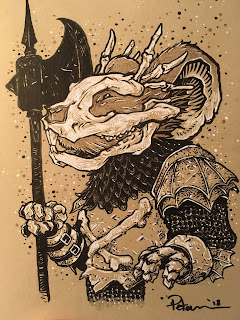 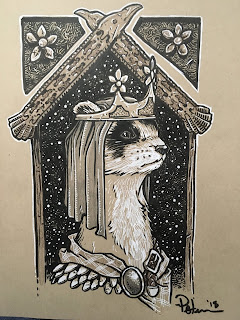 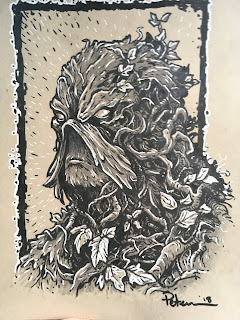 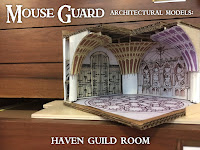 Back when I was drawing Mouse Guard: The Black Axe #6, I built a modular model of the Haven Guild room. This model was made of cardboard, bristol board, paper, and basswood.

Below is a video about the model, how I made it, how it was used, and how it could come to be used again in the future.

I've made a Creator Commentary video for the sixth and final issue/chapter of Mouse Guard Fall 1152: A Return to Honor.  For this last issue in Fall 1152, I’ll be doing the commentary as audio-only. But please feel free to follow along in your copy of the story in either issue form of from the hardcover as I talk about the behind the scenes details, art notes, and my head-space as I go page by page and panel by panel. Enjoy!