This week I'm sharing commission pieces done for my last few conventions of 2015. 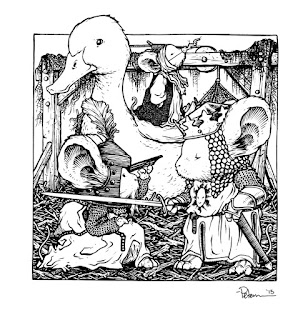 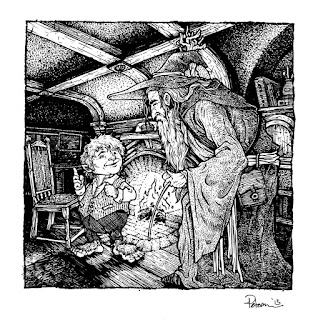 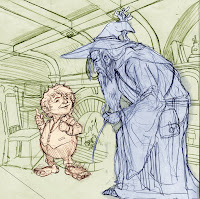 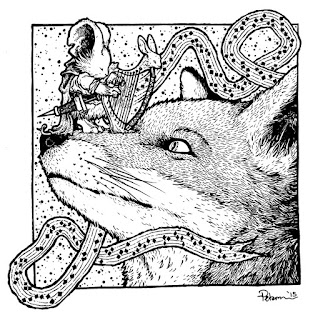 Musical mouse playing the harp to a fox 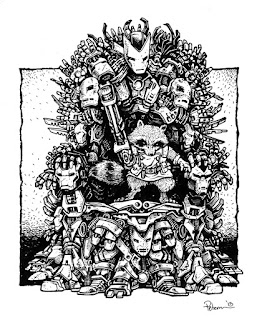 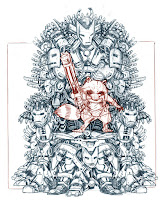 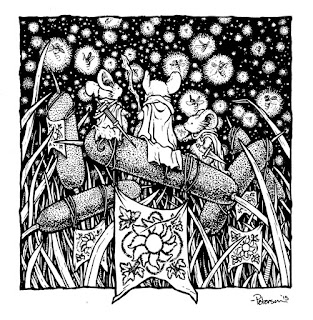 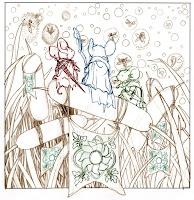 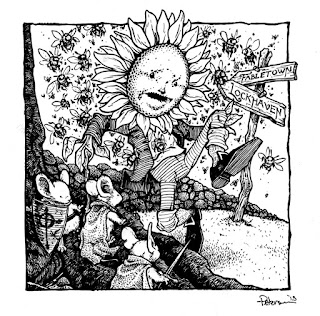 Mr. Sunflower from Fables being observed by Guardmice
(pencil composte sketch below) 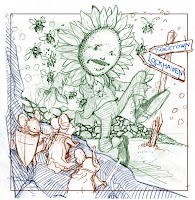 I was aksed by Spongebob Comics editor Chris Duffy to contribute a pinup for the Spongebob #50  issue. I watched some Spongebob shows back when my nieces were very little, so the job sounded fun and I took it. To the left you can see the final art, but in this week's blogpost below, I go through the step-bystep process to create the artwork for this pinup. 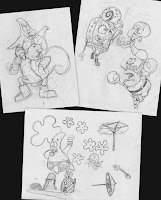 Sketches & 1st Layout: Chris asked that I make sure I included Sandy Cheeks (the squirrel character) since I'm known for drawing furry woodland creatures. I'd been planning on doing Squidward, but decided to go for his suggestion of including Sandy, and while I was at it, include the entire main cast. I only had the rough idea that the characters would be piled up perhaps 3 people high, in some underwater, friendly-rivalry game of chicken. I drew Sandy more like I would in Mouse Guard, though still stylized, and then all the other characters closer to on-model from the show.

I assembled these sketches in Photoshop into a composition. I tinted each character to help me see who was who in a mess of overlapping grey sketches. I didn't know how all the characters would stack, but fooled around with it until I had something that worked. Luckily there even seems to be a bit or a narrative: Spongebob is trying to catch a jellyfish, Patrick is eating a Krabby Patty, Sandy is having fun with her friends, while Mr. Krabs is angry at Patrick for eating an unpaid-for meal, and Squidward wants nothing to do with the antics of all involved. Oh and Gary the Snail is meowing...I just didn't add a word balloon.

Turned this in for approval and...... 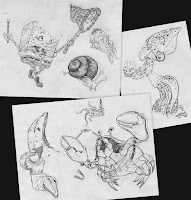 Got a note back about the characters. The problem was two-fold. The characters were close to on-model, but not close enough...so that it looked unsettling....and that was also because I'd drawn Sandy purposely off model, so she didn't match. Chris was hoping I'd really let my style show with the characters and not even try to draw them as they'd appear on the show. So I went about redesigning each character tracing over my 1st layout on a lightbox to keep the character poses and shapes about the same, but altering the characters to look something more like a blend of the cartoon designs and their real-world counterpart creatures/objects.

I scanned those redesigns back in and re-assembled the layout. I'd drawn Spongebob like he was made of kitchen sponge, but not that he was a kitchen sponge, but a creature with eyes and teeth and life. Same held true for Patrick, Squidward, Gary, and Mr. Krabs. In fact Krabs was the hardest because I had to fit a crab into pants and a shirt and get him to roughly fir the same space the original drawing occupied in my 1st layout.

I sent version 2 off for approval AND....

ALMOST!...but I didn't know that while the character's name is Squidward....he is actually an octopus (an inside joke often referred to on the show)...so a quick change to the shape of Squidward's head, and I had an approved layout! I think the final version is a better piece than the original, it just took a lot of re-drawing to get there.

I printed this out on my home printer on copy paper and then taped that printout to the back of a sheet of Strathmore bristol to start inking.

The inks, all done with Copic Multiliners (the 0.3 & 0.7 nibs mainly) took a bit longer than I'd expected. All those new details in the Petersen-style redesigns added to that process. I also wanted to carefully think out what lines I knew I was going to color hold (like Spongebob's pores, Squidward's spots and eye details, inside Sandy's helmet, the floating flotsam in the background, the sand, etc. so that I wouldn't have too many places they intersected with lines I wanted black in the color art. Planning ahead like that can save a great deal of time when isolating the lines for color holds in the color stages.

I scanned the finished inks and started the flatting. Most of the color choices were made for me by the designs from the cartoon, but I did have to make some alterations and a lot of minor saturation/value changes so the piece still worked together and in my style. Like the thinking ahead for the color holds, flatting is a lot about prepping a file so that as you render it, you can easily re-isolate separate parts to give them the right shading and texture without affecting the area next to it.

the last step was to render the characters using the dodge and burn tools in Photoshop with a textured brush. To the left again you can see the final artwork which is in Spongebob Comics #50! 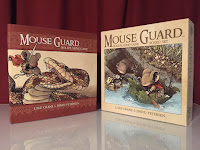 The 2nd edition of the Mouse Guard RPG Hardcover Rulebook and the Boxed Set are now available through your local gaming and comic retailers (if they didn't stock a copy, they can still order one for you through Diamond).


To make it clear what is included in each of these products is and what is needed to play, I made a video to explain:


Something I didn't go into in the video is what the differences are between 1st and 2nd edition. Luke Crane outlined these on the Burning Wheel Forum for the Mouse Guard RPG:

"We've been gently tweaking rules and reediting the book, both in the text and art. It's been my pleasure to have David involved at every step of the process.  [He]...sat with me as we recreated all of the patrols using the revised recruitment rules. It's been great to work so closely with him.

I tried to keep the changes to Mouse Guard is minimal as possible. I like Mouse Guard. It's light and open, while providing enough structure that the game moves along without too much effort. The main areas that changed:

Conflict: Thor & I simplified the individual team and multiple team rules. It's all very straight-forward now.

Wises: We gutted wises and ported over the systems from Torchbearer. This necessitated some minor changes to the Traits rules, too.

Recruitment: I rejiggered Recruitment to make it faster and to make the characters slightly more skilled to start, with a solid base of skills."

Cards: Weapon, Action, and Condition cards and their rules/clarity in the Boxed Set were also updated and significantly improved. 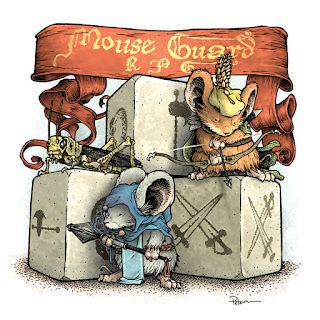 
2016 Appearance Dates coming soon.
Posted by DPetersen at 9:00 AM No comments:

Legends of the Guard Volume 3 Hardcover

Tomorrow the third volume of Legends of the Guard comes out! I love getting to do the Legends of the Guard series because I get to work with so many amazingly talented folks who lend their artistic voices to the myth and lore of Mouse Guard. Today's blogpost is about the Hardcover and all the awesome stuff that will be collected inside. 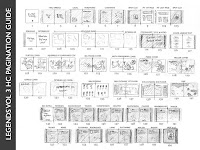 To the right you can see my hand-drawn pagination guide editor Cameron Chittock and I used to assemble the volume. As you can see all the contributor stories are included (see below), but so are all the covers (including variants by Eric Muller, Humberto Ramos, and Ramon Perez), a new map, a 2nd floor cutaway of the June Alley Inn, and an epilogue by Lauren Pettapiece (see further below) 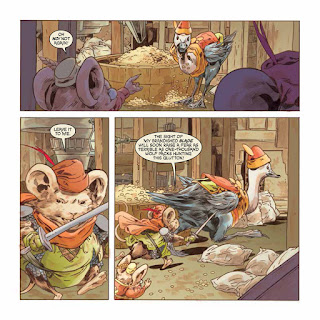 The Gosling & the Ghost: Mark Buckingham 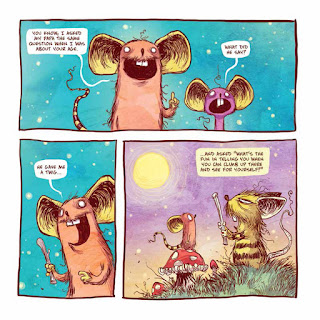 The Mouse and the Moon: Skottie Young 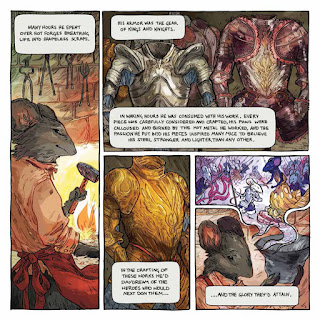 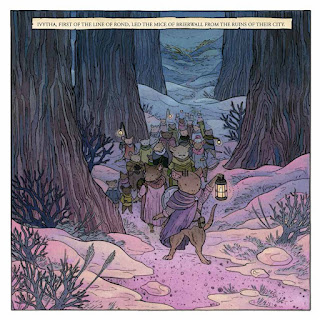 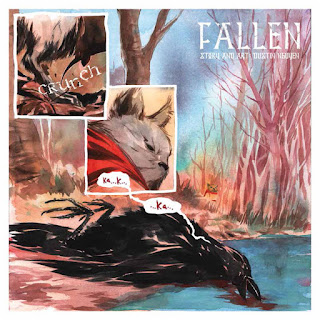 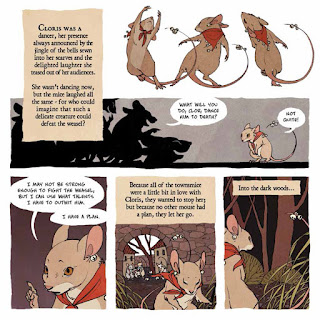 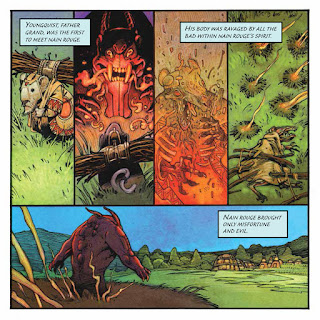 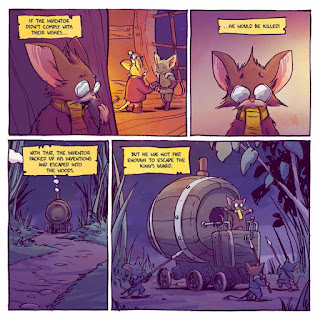 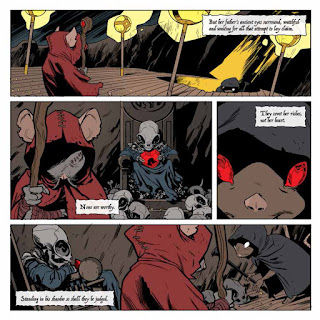 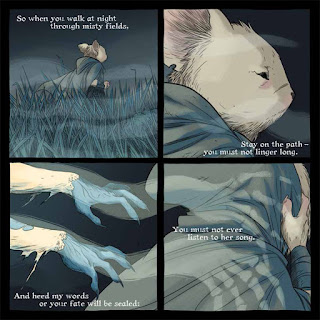 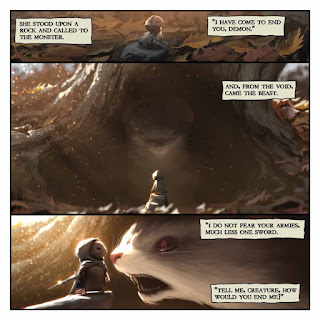 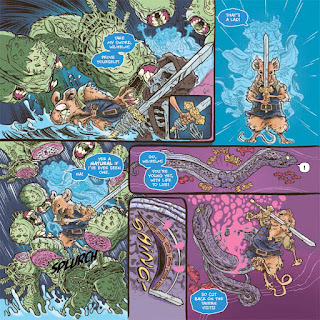 ...and..
an epilogue with pages from me: 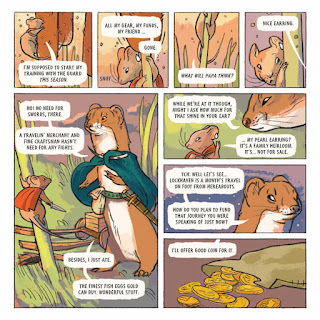 The hardcover has a two page spread dedicated to learning a little more about the patrons in the June Alley Inn this time around.

You can also take a look back to past blogs about the process of creating each cover:

So enjoy Legends of the Guard Volume 3 Hardcover for all it's stories and extras!