Julia and I flew into San Diego last Tuesday. With the con staring Wednesday evening, We stayed at the Marriott, which is right next to the convention center, and this year, our room overlooked the bay. 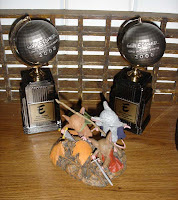 I'll cut to the chase about the highlight of the convention: The Eisner ceremony. I had the pleasure of sitting with Julia, Jeremy Bastian, Emily Jenkins, Mark Smylie, and MATZ (the writer of the Killer which was also nominated for an Eisner). In addition to Frank Miller's speech, and seeing Samuel L. Jackson on stage, I had the pleasure of receiving 2 of the awards myself. The first for Best Kids Publication was handed to me by Tom Kenny (voice of Spongebob) and the 2nd for Best Graphic Album Reprint was handed to me by Gabriel Macht (star of the upcoming Spirit movie. A wonderful and magical night that I will never forget.

Bill Presing did a book a while back called Rex Steele: Nazi Smasher that brought together all the fun pulp ideas that fueled George Lucas to create Indiana Jones and Dave Stevens to create the Rocketeer. Bill is very good at drawing very curvy women and I asked for a sketch commission of the Nazi temptress Gretta from his book in my sketchbook. Thanks Bill!!


Of course when returning from San Diego, it's always a good idea to leave room in your bag(s) because you come home with so many cool items. I took a photo when I got home of most all of my goodies: 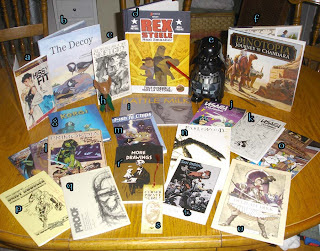 a: An Adam Hughes sketchbook from this year.
(Adam's hand is injured and he was only able to sign this year at SDCC)
b: A children's book by my pal Christian Slade (creator of Korgi) about a decoy that comes to life
c: Another Adam Hughes sketchbook
d: The French edition (oversized and in color) of Rex Steele
e: A nesting doll Darth Vader given to me by Katie Cook from her Lucasfilm party swag
f: James Gurney mailed a copy of his latest Dinotopia book to the house while I was gone
g: The latest Korgi book by Christian Slade
h: A handmade Mouse Guard PEZ dispenser by Sparky and Lars from the hellboy.com forum
i: an art book by 4 Lucasarts/Lucasfilm artists showing their concept art.
j: The latest Usagi Yojimbo trade
k: The latest Usagi sketchbook (Satn Sakai is the nicest man you'll ever meet)
l: all 3 issues of the ASP series Primordia
m: volume 1 of Fish 'N Chips by Flint, MI native and Bone colorist Steve Hamaker
n: a cool fantasy anthology called Fablewood (fave=Fish by Sarah Mensinga)
o: The latest issue of Usagi Yojimbo (see what I mean about how generous Stan is!!)
p: Starwars.com artist Tom Hodges latest sketchbook
q: Riley Rossimo's Proof sketchbook
r: Mike Mignola's awesome sketchbook (last year's was titled 'some drawings')
s: Cursed Pirate Girl bookmark from Jeremy Bastian
t: Mignola's Hellboy print
u: Eisner nominated Delila Dirk comic


James Gurney was amazingly kind to sign and note the Dinotopia book to me: 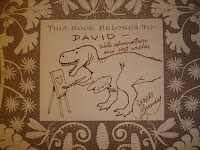 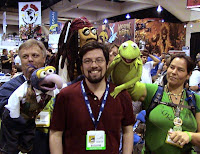 Walking around the con was a former Muppet builder and his pals with a Gonzo puppet, a Kermit puppet, and a Muppet-style Jack Sparrow. Julia snapped this photo of a geeked-out me to be surrounded by Muppets. The builder (his name escapes me) and I talked about the Master Replica's line of Muppet 'recreations' and the discrepancies. He worked on the line to try and make sure they were as close to actual Muppets as possible, but MR made compromises to either make things easier or more cost effective. I did get some clues about how to care for my MR Gonzo so that he can have as long of a life as possible.

And lastly, I want to mention all the other cool people and stuff that I don't happen to have photos of: Sketchbook sessions (with Rick, Maija, Tad, Brenna, Sparky, Lars, Jeremy, Katie, Ryan, Emily and Rick), going to Katie Cook's 'How to draw Star Wars for kids' panel (and getting to do a Wookiee howl for the audience), All the ASP creators, and our 'quiet dinner' with Jeremy, Emily, Katie and Ryan. 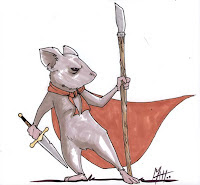 It's a two-fer on this ginormous post. First up a fan by the name of Matthew Franklin dropped off this ink and marker piece at the ASP booth. It was a pleasure to meet you Matthew, and thanks for the art! 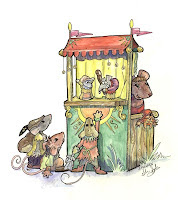 2ndly is a husband and wife team of Gordon Smuder and Jennifer Menken. Gordon is a model maker (he made all the tiny hats for the Ziploc finger guy several years back) as well as a puppeteer (he is launching a new series called Transylvania Television) Jennifer is a crafter who made a wooden box for me with the Clarke's Cartography logo woodburned onto the lid. The piece is a Mouse Puppet show of Punch and Judy (with the cat puppet as the devil hanging off to the side) Thanks Gordon and Jennifer!
Posted by DPetersen at 7:52 PM 16 comments:

SDCC:
San Diego is only a few days away, and I apologize for only just now posting about the details. I'll be at booth 2231 (Archaia Studios Press). Julia and I get in to San Diego for preview night and will stay through Sunday...five days of geeky goodness. 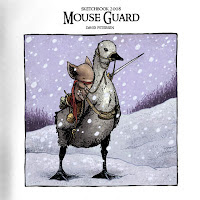 I'll have a new color Mouse Guard sketchbook available. 24 pages consisting of past convention sketches colored specifically for the sketchbook. Signed and limited to 300 copies. 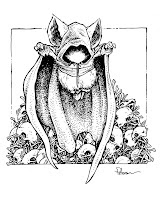 I am changing my commission policy. Because I end up taking so many commissions at conventions that I feel like I end up not giving enough attention to attendees stopping by to chat or get their books signed, I am going to be limiting how many I do. I'll take two commissions each day (starting when the floor opens to the public) available for pickup the next day. A 7" x 7" fully inked piece is $150.

I'll also be offering something new this year. I'll be doing sketch cards for $20. (I have a few examples posted here) The images will be per request. And of course, I always do a small sketch when signing a Mouse Guard Fall 1152 hardcover for no charge.
Fan Art: 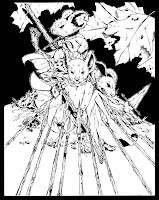 Two pieces this post. The first comes from Pat who I met briefly at the Motor City convention and my local comic shop. However, it was so brief, that I don't know his full name, what his projects include, or what his site is (Pat I'd be happy to link to your site here). This piece was given to my local shop owner to pass on to me from Pat. Thanks man!! 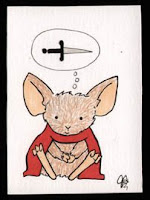 The second is from a fan named Jamie (whose site appears to be down at the moment. I met Jamie through the Hellboy.com forum. She and her fiance stopped by the Toronto con and she gave me this little drawing. The back says "I figured Saxon dreamt of swords at an early age!" Too true Jamie, too true.
Posted by DPetersen at 3:21 PM 10 comments: 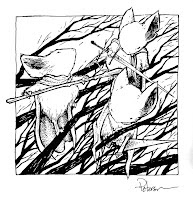 Back from Chicago, and my brain and body are too tired to type a big report. So short and sweet this time. Sorry about any confusion about my table location, Wizard double booked a table and asked me to move Friday night. And a HUGE thanks to my Brother-in-law Mark for driving out and helping me at the convention, it was his first con, and I think he had a good time! HUGE-ER thanks go to Julia for driving more books out to Chicago from Detroit when I sold out on Friday.
Here is a smattering of photos from the weekend. 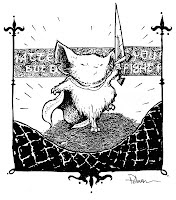 Fan Art:
The wonderful Katie Cook did this for me. She was a bit worried I may not find it funny...but she was dead wrong. 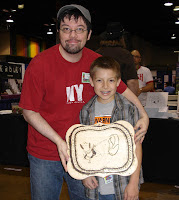 And also a fan named Issac came by with his dad to give this wood burned piece to me. I really love the snake-eating-it's-tail-border. Thanks Issac!!
Posted by DPetersen at 2:47 PM 6 comments: