Kenzie, the blue cloaked patrol leader of Lockhaven, deserves a print all to himself. I've been trying to offer up more of the 5" x 7" matted prints at conventions and in my online store. With a Saxon, Sadie, and Gwendolyn print already available, I wanted to include that stalwart mouse of wisdom to the lineup. Because of his lack of a sword, and his calm nature, he's not the most requested of characters, but the fans who love Kenzie, really love him and they are not in any small number. In today's blogpost I'll share the process for creating the image for this print. 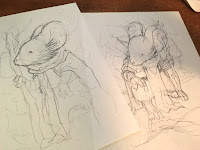 I did two sketches for this piece. It's rare I get this torn between sketches. I can usually hone in on what I like more about one idea/concept/rough and decisively choose. But for some reason, I had to call in the assitance of my Editor Cameron Chittock to talk me through this choice. The one on the left was calm, resolute, and peaceful....but ultimately a bit dull. And the one on the right was better, but didn't drive home those Kenzie qualities in body posture as well as the other. With Cam & my wife Julia both weighing in, I came to the decision that the more dynamic pose was best.

Layout:
I scanned in the rough pencils and re-sized them to match the size & ratio I'd need for the final artwork & print. I think (though I'm not entirely sure) I fiddled a bit in Photoshop with the proportions and angle of the head. I also added in a drawing of a lantern. I didn't use the lantern design Kenzie has from Winter 1152 because the Saxon print already had that criss-crossing wire frame and I didn't want to repeat myself. I opted to do something tall and lender to match Kenzie's frame (I try to make every detail about Kenzie make him feel tall: the long straight cheek hair, the staff, the long front-cloak, etc.)

I printed out the above adjusted layout and taped it to the back of a sheet of Strathmore 300 series bristol. On a light pad (I really like the Huion brand of these) I can see through the surface of the Bristol and ink using the printout as my 'pencils' to guide me. I used Copic Multiliners (the 0.7 & 0.3 nibs). After Wind in the Willows, it was hard not to want to add hatching in on every leaf to give a better sense of depth and to help Kenzie stand out a bit more, but I reserved to do that in color instead...

Color Flats:
After scanning in the inked piece (and adjusting the levels and cleaning up any dirt, dust, etc from the scan) the first step to coloring is Flatting in colors. This means, like any good coloring book user, you color spaces inside the lines. But when flatting, you don't need to worry at all about shading, lighting effects, or even if you are going to use the real colors (here I stuck close to what I knew the palate was for the final piece). Unlike some colorists, I like to use new Photoshop layers for new areas of color. This allows me to not have to 'cut in' precisely when I butt up against an area I've already colored and it allows me to smudge up and fade out the color in places where my linework isn't closed off completely without disturbing the color next to it.

Final Colors:
After the areas of color are isolated by flat colors, I went in an rendered each part using the Dodge & Burn tools in Photoshop. I have my settings on Range: Highlights and 1% exposure most of the time and I use a textured brush. I tweaked color balances with leaves and subtle areas like Kenzie's nose. At this stage, I also added in a glow to the lantern and made the veins of the maple leaves more subtle. 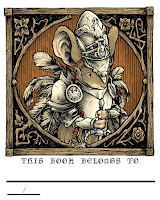 For this year's Mouse Guard bookplate (For new fans, I've done an annual limited-edition bookplate since 2012...links at the bottom of this post to see process on them all) I decided to once again ape the design of a character from Jeremy Bastian's Legends of the Guard story: Faulknir.


To the left you can see the 2017 bookplate, which will be available at my convention appearances as well as in my online store, and for this week's blogpost, I'll share the process for creating the image. 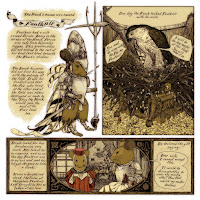 I started with this brilliant page of Jeremy's from "The Tale of the Hawk's Mouse and the Fox's Mouse" from Legends of the Guard Volume 1 (which I'm fortunate enough to own the original of). Jeremy did a fantastic job of creating a myth about the creation of the Mouse Guard that I'm jealous of to this day. I've drawn from this story for the Mouse Guard short story "Service to Seyan" as well as last year's bookplate (and a few easter eggs in Black Axe). Here we see Jeremy's design for Faulknir, his armor, & feather cape. 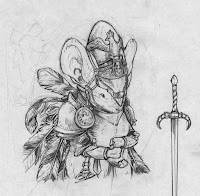 On copy paper with a mechanical pencil, I set to draw my version of Faulknir. I tried to keep as much of the detail of Jeremy's version in as possible, but executed with my proportions, line style and sensibilities. Though, it was hard not to include more lines for shading like an etching.

I'd considered doing this piece as an etching (my degree is in Printmaking) but time & access to a press, acid, & supplies made me opt to just ink this traditionally as an illustration. 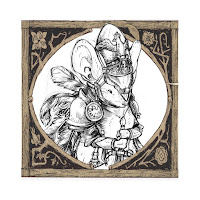 I took that drawing and composited it in Photoshop inside the borders that Jeremy drew on the bottom panel of his page. I, of course, checked with Jeremy before doing this to get his blessing. Like last year's bookplate I wanted to keep the motifs and aesthetics that Jeremy infused into those mice.
I'd be able to make it my own in the inks... 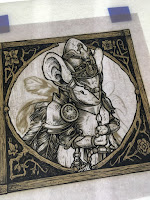 I printed out and taped the above layout to the back of a sheet of Strathmore 300 series bristol. On  my light pad (I like using the Huion brand of these) I could see through the surface of the bristol to use the printout as 'pencil' guides as I inked. I used Copic Multiliner (the 0.7 & 0.3 nibs) to ink this piece. To the left you can see a phone-photo of the inks in-process on the light pad. 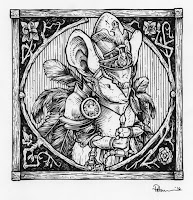 Here are the finished inks for the piece. I added a vertical line pattern behind Faulknir to help him pop a bit. Like I did on Wind in the Willows, the key to having these lines look organic, but still evenly spaced & straight is to use a t-square and pencil them onto the back or print out a lined guide and then ink them by hand with no ruler, allowing for little hiccups and imperfections as you go. 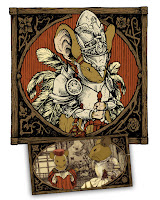 To color this piece, I pulled my first-pass palate from Jeremy's panels. Jeremy purposely used a limited color-range when doing his Legends story, and unlike last year's bookplate of Silfano, I chose to use the same limitation of hue Jeremy did. 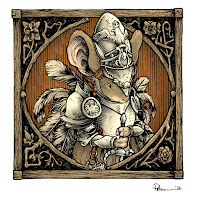 Ultimately, as I did the final rendering, I adjusted the colors a bit, so that they had some of my voice, but still payed homage to the wonderful work of Jeremy's. Here is the finished artwork sans-text & bookplate trappings.

The bookplate will be available at all my 2017 convention appearances and later in march in my online store. 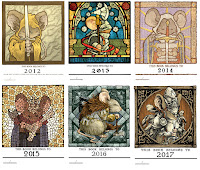 My illustrated edition of Kenneth Grahame's classic Wind in the Willows published by IDW has been released! The book has Grahame's original text, with over 70 illustrations by me.

For this week's blogpost I'm going to share a few of the physical models I built to help me visualize & illustrate the book. Below are photos of the models from Badger's Kitchen. I've also included a video of me talking about the models.

BADGER'S HEARTH:
The hearth model itself is made from chipboard with paper printed as brick glued on and basswood & popsicle stick details. The matching settles are basswood and the stand-in hanging hams & braided garlic is tissue & string. 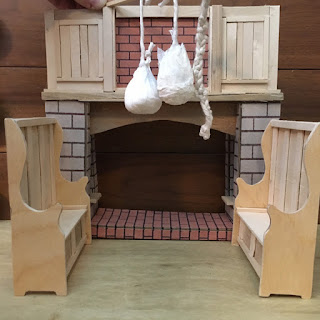 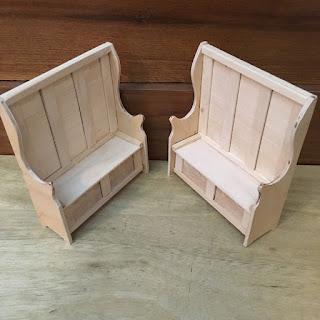 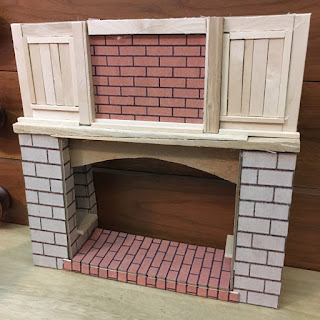 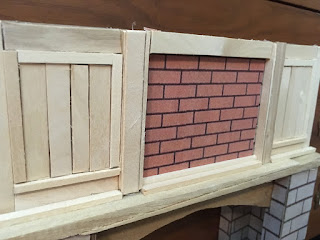 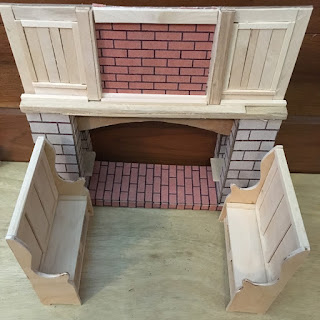 BADGER'S CUPBOARD SHELVES:
This was made out of basswood (typically used for doll-house parts) I referenced a few Edwardian pieces, and then built this to-scale with quarters as dinner plates. The bowls you see are store-bought doll-house pieces. 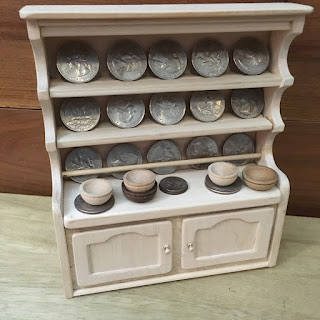 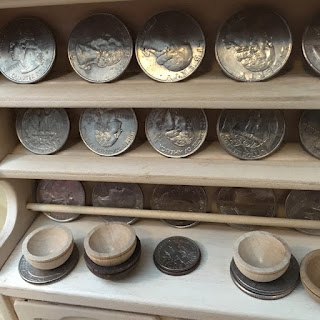 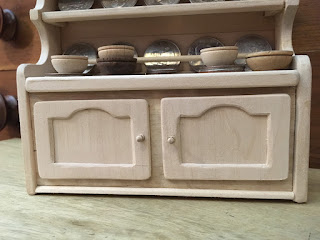 My illustrated edition of Kenneth Grahame's classic Wind in the Willows published by IDW has been released in the direct market (comic shops) and will be in the Book Market Feb. 14th! The book has Grahame's original text, with over 70 illustrations by me.

For this week's blogpost I'm going to share a few of the physical models I built to help me visualize & illustrate the book. Below are photos of the models of the Toad's Caravan & The front facade of his Carriage House. I've also included a few videos of me talking about the models.

TOAD'S CARAVAN:
This model is made of basswood (typically used for doll-houe trim & details). The steps are removable and cam hang from the back, the wheels operate independently, and the axles have working suspension. Details are drawn on by hand in pencil. 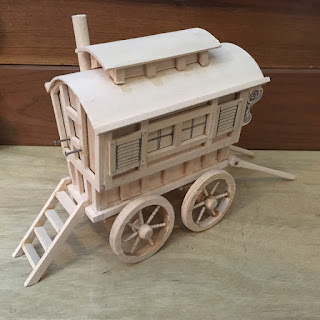 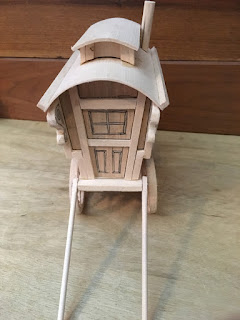 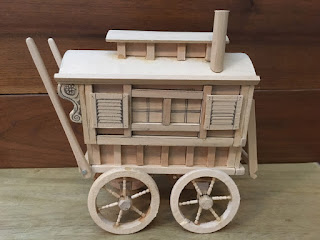 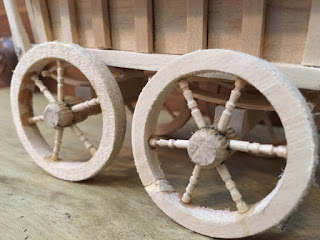 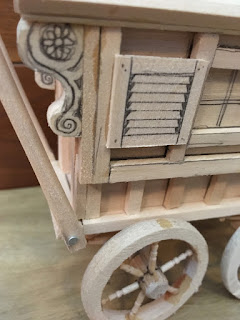 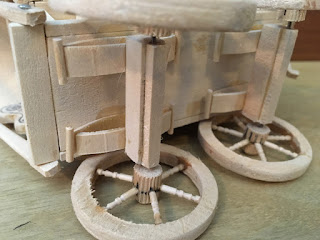 TOAD HALL CARRIAGE HOUSE:
This model is all hand-drawn (no printing out duplicates) The wall is made of bristol board and the open doors are chip board (the thicker material on the back of a sketch-pad). The doors are hinged with painter's tape. 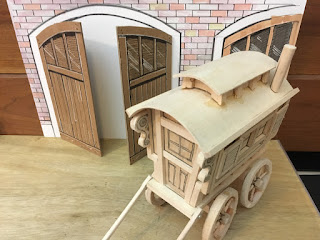 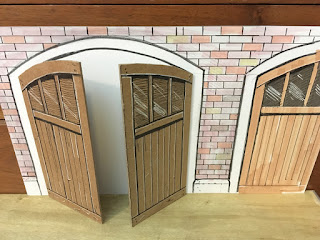