Children's book illos from the past:

I was browsing my harddrive for pieces to post in this blog entry and I stumbled across two pages for a children's book I had an idea for a few years back. I was working in an antique store (with lots of large ticket and physically large items) when a mother brought in her two sons.

One dressed all in red, the other in green. They were running around the store when their mother calmly said something to one of them and then he passed on the message to his brother. I liked the interaction and the idea of 'stop and go' started in my mind. I thought it would be great to do it in a style similar to that of Jack Ezra Keats where the artwork was a blend between collage and painting (this later lead to the style of illustration I used for books for my nieces Kate and Emma)

I'm really glad to hear there is so much interest in a Mouse Guard Role Playing Game so far! Luke Crane has been working really hard on making sure it is firmly rooted in not just the current Mouse Guard books, but doesn't undermine any future Mouse Guard stories and books. At the same time, Luke is making sure there is plenty of room for players to take their own paths and adventures that stray far away from my Mouse Guard. Unfortunately, I can't share too much more on the details or more artwork. In the past I posted sketches for the cover. Now the cover is finished and since that will be shown in any solicitation ad, I figured I could share that with you. It was really fun placing characters from Fall and Winter along side characters who have only been mentioned or ideas of characters that I plan on fleshing out some day. 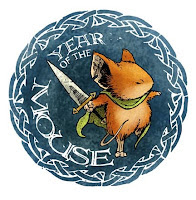 Year of the Mouse:


Don and Joanna Corcoran, who are developing a Mouse Guard Board game, have declared this not the year of the rat, but rather, of the mouse. One of their many game-related sites: The Reality Vault, has a post about it and some of their plans to make the year plenty mousey. Thanks for all your time and support Don & Jo!

Upcoming events:
The next few weeks are going to be exciting, and they only mark the start of what will become convention season.


-Wednesday 3-26: The Villard edition of the Mouse Guard softcover will be out in stores. It's pretty exciting to have an imprint of Random House wanting to publish your comic work.


-Saturday 3-29 @ 1pm: Gallery opening, presentation, and signing at the Flint Institute of the Arts. I'm really excited about this one. My hometown has a wonderful art museum. It's where I took classes as a youngster and then later when the local College had it's art department housed there it was my home-away-from-home. The day looks like it will be a lot of fun


-Monday 4-7 @ 7:30pm: Schullers Books talk and signing. The lovely folks at this independent bookstore asked me to come and talk about comics and sign some of the new Villard edition of Mouse Guard. Come on out and chat if you are in the area.

This one comes from Bo Harris. He sent a lovely
e-mail and a scan of his color pencil work. Thanks Bo!!

I will be appearing today at Mott Community College in Flint, MI (my home town) today Mar. 4th (the only day of the year that is also a command) from 11am-2pm at the Phral Center . If you are in the area, hope to see you! I'll have books to sign, answer questions and if time permits, I may do some sketches.

For the RPG I have been doing a bunch of new spot illustrations. Some are for the chapter headers, others are just to throw in to give a sense of setting or mood. Here are a few that I colored Monday: 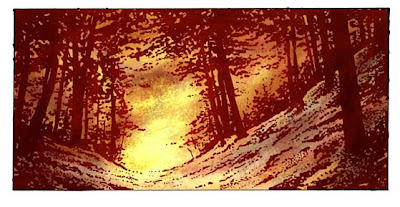 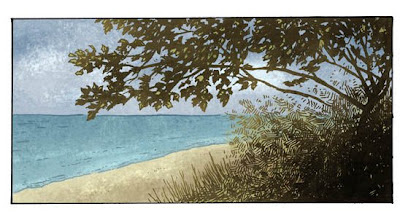