Reference Model: The Mariner's Bell:
In issue 2 of Black Axe, Em & Celanawe were going to meet Conrad at a tavern. To design this brew-hall, I had to choose one of the buildings from the larger Port Sumac Model to fit my interior design into. The octagonal dwelling I chose was one that I found free online as a 'medieval hut'. I had also tacked on another free online cottage piece to the roof on the town model, so my interior design needed to use that exterior shape.

I took the same hut model and upscaled the printout. I reworked the graphics to be a two story space with a row of windows around the upper floor and stone walls on the lower one. To have a purpose for the hut I glued onto the roof, I made that the housing for a big bell that perhaps the town uses as a signal for predators, upcoming storms, or incoming mouse ships (deafening to the patrons of the tavern though!). I didn't build the bell into the model, but the idea came to me as I was gluing together that space.

I glued up the printed out design so that the graphics were on the inside. I left off a section of the wall to give me a view inside. The spiral staircase is a bunch of equally trimmed pieces of craftwood glued piece by piece onto a drinking straw. The balcony is sections of cardboard. While I had an idea of what the interior of this tavern would look like, it wasn't until I built a physical version of it that I got a real sense of the design as a complete location, before it was just floating elements (windows, staircase, balcony, etc.)

Reference Model: Port Sumac:
New Mouse City, new design aesthetic! I wrote the description for the lower portion of the seaside mouse town as: "Docks, moored ships, and floating dwellings lashed and built off of one another form the heart of the port...". But to visualize the location and keep the design consistent, I built a model.

This time I had less to build though. When doing the Fall 1152 extras, I printed several free online papermodels of medieval cottages and buildings. I had about fifteen or so of them, which I tucked away in a drawer in case I ever needed them again. I dug them out and found a few more freebie models to print and construct. Then I started placing them on craft sticks poking out of a sheet of rigid insulating foam.

scrap bristol formed the docks and walkways, and I just kept cobbling everything together until I found it visually pleasing. This hodgepodge approach of collecting various models, in various scales, and placing them by eye and with no plan in mind, lent itself to perfectly designing the spirit of this mousey location which was supposed to evoke a bit of Mos Eisley from Star Wars, Scabb Island from Monkey Island, and a medieval shanty town.

Reference Model: Conrad's Ship:
Because of how frequently Conrad's boat would be seen in Black Axe #2, I knew I needed to build reference for it. unfortunately, I didn't take photos of the build process, but I can tell you that it started with a cardboard skeleton of the hull, followed by a cardboard deck, and bristol board sides. The railings were all made with match-stick sized craft scrap wood.

For adhesive, I started with rubber cement, but as I went along making more permanent decisions, I switched to hot-melt-glue. The bottom of the boat's hull is also covered in blue painter's tape. It's helped me smooth out the contour of the compound curves, but also gave me a reference line for where the water level would be.

I tried to figure out a way to design the rigging so that Conrad could man the ship alone having full control over the sheet (how tight the sail is) and the rudder. This project was (like the Legends cover #2 library model) an exercise in tactile design. I tried drawing concept sketches for this boat based on various historic ships, abut didn't get very far. By cutting and gluing, I designed as I went eyeballing shapes proportions in 3d as I went. (only took 1 night)

Black Axe #2: May 4th
After my lateness in getting the issue finished, and the printer dropping a zero from our quantity request, the issue will be out Wed. May 4th. Archaia posted a nice preview of the issue here. I want to thank you fans for being patient. I know it's been quite a wait and I'm quite aware of how far behind I've fallen. It's because of you guys that I earn my living, and I hate to make you wait.
This will also mean that for the next few weeks I can post photos & commentary on the 3 models I built as visual aids for production on the issue. 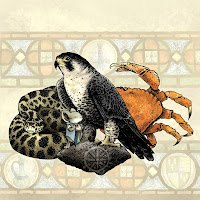 Free Comic Book Day UPDATE:
I now have 2 appearances on Free Comic Book Day. From 11am-3pm I'll be at Meltdown Comics in LA. This event will be Archaia's home base for FCBD and I will be joined by Brian Holguin (writer of the Dark Crystal FCBD offering). The Henson Co. will have two life sized Skeksis from the original movie on display for photos! From 4-6pm I'll have moved over to The Pasadena location of Collector's Paradise. You can preview the Mouse Guard/Dark Crystal FCBD offering here.

Transylvania TV
In the past I have mentioned Transylvania TV, a Puppet-Retro-Monster Comedy web show that is NOT FOR KIDS & is spearheaded by a pal of mine Gordon Smuder. I did a new T-Shirt design of the vampire LeShock for their online store. Currently the show is unsponsored, so fans can show support and keep the cameras recording with purchases. I hope to do a few more of these of the other characters as time allows.

Fan Art:
Karine Charlebois (@kanthara on twitter) sent me this fanart based on the Mouse Guard RPG campaign she is playing in. I really like the depth of focus in this piece, all the design work on the cloaks and weapons, and the texture details on the trees and forest floor.