Michigan Comics Events:
Three big events are coming up for the Michigan comic community! And I am fortunate enough to be a part of them all! Here is the rundown: 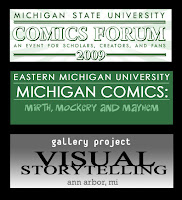 MSU Comics Forum:
Held every year on the beautiful campus of Michigan State University, The Michigan State University Comics Forum is an an event that brings together scholars, creators, and fans in order to explore celebrate the medium of comics, graphic storytelling, and sequential art.
I'll be delivering the keynote speech on Friday March 27th at 7PM and I'll be on a comic creators panels on Saturday March 28th. The events are free to all
here is the link for more information

Michigan Comics: MIRTH, MOCKERY AND MAYHEM
My Art History Professor at Eastern Michigan University (EMU) has been putting on shows about comic originals as art for a number of years. This time, he and Michigan-based cartoonist Dave Coverly have co-curated a show featuring solely Michigan-based artists working in graphic storytelling from the past and present. The show dates are March 31-June 5 in the University Gallery at the Student Center. There is also an opening reception/comics symposium on the 31st from 7PM to 8:30PM. Three Mouse Guard originals will be part of the show and will tour with the show as it travels over the summer and early fall.
here is a link to the EMU Student Center for directions & maps

Visual Storytelling at the Gallery Project in Ann Arbor:
The uber-talented Katie Cook is co-curating a show at the Downtown Ann Arbor Gallery Project that will feature multiple works of sequential artwork. It looks to be a great collection of artists works and the focus is on the storytelling and the process of making artwork which tells a story. I'll have several Mouse Guard originals and a paper model I made as reference on display. The show runs April 15th through May 15th.
here is a link to the gallery project's site for hours and directions

Mouse Guard Winter #6
Is done! It is in the hands of Archaia now. The few friends who have seen the issue are enthusiastic about it. I'm pretty happy with it myself. I am terribly sorry it took so long to get to the end of that l-o-n-g winter, but it feels good to have 2 finished Mouse Guard story arcs under my belt. I feel that this series was an improvement over the Fall 1152 arc and even the later issues of Winter are better than the beginning issues. Currently I'm getting the extras for the hardcover ready...so bear with me, but I'm trying to get the work in by the deadline.

Covers:
I'm going to assume I can post these since they both appear on Boom's site. Here is the 2nd Muppet Robin Hood Cover and the 2nd Mr. Stuffins Cover.

Fan Art:
I met this young man at the NYCC who had a Lieam tattoo on his arm. I was flabbergasted. I asked him "You know those things are permanent, right?" and he smiled and replied "yes". I'm not a tattoo guy, so I'll never understand it, but I know to be flattered.

Projects I can finally talk about:

Star Wars Galaxies 4:
I was asked by Topps to do a card for Galaxies 4. Being a huge fan of Star Wars, I was THRILLED to be asked. I was told I could do anything Star Wars I wanted, but that seemed too broad for me to pick from, so I self-imposed the restriction of something from Empire Strikes Back (my favorite of the 6). Wanting to see more of the bounty hunters myself, I opted to have the three most visually interesting in a shootout of some sort. The Galaxies 4 packs are out in stores currently. Happy Hunting!!

Muppets!
Another of those life long geek fantasies came true when I was offered the cover assignments for the Muppet Robin Hood series! (at one point in my life, I had thought about trying to become a puppet builder at either the NY or London Henson shops). I have 3 of the 4 done currently, but I can only share cover #1 for now. It was a huge pleasure and I look forward to drawing more muppets and sharing the results with you guys. 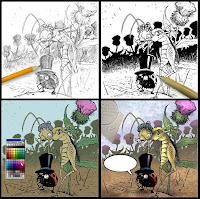 Strathmore:
Fans of Katie Cook's blog knows she was one of the artists asked to do cover illustrations and a bio comic for Strathmore paper's new comic-art line of paper sizes and products. I did the artwork that appears on the 300 series. 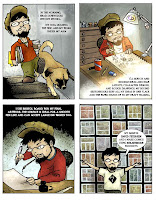 It features a Scottish Grasshopper and Ladybug amongst the thistle (Strathmore was founded in Scotland and their logo is the thistle).

So that should cover it for a bit. Thanks for all the feedback from the month of Old Time Radio! I'm glad people enjoyed it and hope people unfamiliar gave it a try. 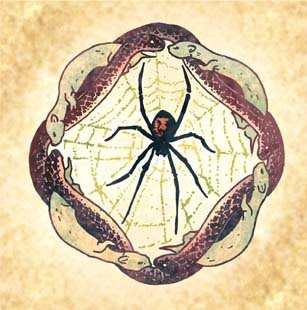 Feb. ,Mar. , & April....
Last month was crazy because of all the traveling we did. New York, back to Michigan, Fairbanks, back to Michigan, San Francisco, and back to Michigan. They were all great trips that I enjoyed, but now I have a mountain of deadlines staring me down for all of March and spilling into April.

So while I'm back home again, I may be slow to respond to e-mails, requests, comments, etc. 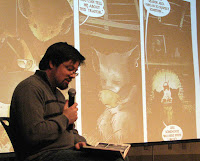 Alaska:
I was invited to Alaska by Greg Hill, who is the director of the Fairbanks Public Library. He started a program a few years ago called 'Guys Read' aimed at improving the attitude boys have about reading right at the age where their reading comprehension scores drop in the 4th grade. Adult males volunteer to go to the public schools and read the first chapter of a graphically packed book aloud (with the images from the book) projected behind them. The schools then receive several copies of those books so the boys can check out the rest of the story. The reading goes on for a number of weeks until there is a party at the public library for the boys who participated. I was invited up to be the special guest at the party, and read Mouse Guard Fall 1152 aloud (and in character voices) to the boys. 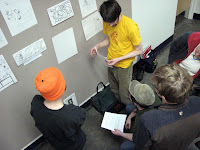 I was also invited to give a lecture/presentation at the University of Alaska Fairbanks as well as teach a workshop there on comic storytelling. The workshop went well. I feel I lingered too long on talking about the process when I should have had them just start on the process, but live and learn. The students all seemed happy with the workshop and I feel we covered some great ground.

And special thanks to Greg, Clare, Jamie, and Diane for making our trip so comfortable.
Posted by DPetersen at 3:34 AM 15 comments: