Calgary Comics Expo:
It's been a while since I posted, so I haven't been able to share how great the Calgary con was. Julia and I had some travel difficulties getting there, but it was worth it! It's a great show with a very impressive guest list. I met Whilce Portacio, Jim Mafood, Bill Pressing, and Bill Willingham and reconnected with Josh Middleton and Stewart Immonen. I was really impressed with the hardcover art book they publish to bennifit the Boys and Girls clubs of Canada. I didn't get many sketches done at this show (it was very busy for being a smaller convention) but I was able to do this young hellboy. The owner scanned it and I gave it a quick color job as a warm-up for today.

Our driver to and from the airport was super-nice-guy Steven Gettis. I had never met him in person, but did a piece for his literature themed blog. And I was able to get another piece done for him. When I was in 2nd grade some of my classmates and I decided we were going to do a play of the Wizard of Oz for our class. We cast roles, rehearsed, planned, conned our folks into making costumes: all without ever getting permission from the teacher to ever preform it. She said "no" our parents, knowing how much work we had all put into it, talked her into sparing a bit of time over 2 days for us to preform it in two parts. I was the tin-woodsman and have always had a soft spot for the character. So here is the moment (with text from the book) Dorothy and Scarecrow find the Woodsman rusted stiff.

Free Comic Book Day:
Had a great time signing at Green Brain Comics in Dearborn, Michigan. I had free prints available for everyone, since I didn't have a Free Comic. Dan and Katie went all out to make all the guests feel well cared for. I met and sat next to James Kochalka who draws 'American Elf' and the upcoming 'Johnny Boo'. Thanks Dan and Katie for the great day!

Runners:
Sean Wang does a great book called Runners. He self published the series of five issues and later a compilation over the course of several years and with the support of his then-girlfriend/now-wife Peggy. Runners is a sci-fi adventure comic that takes a lot of it's cues from the han/chewie parts of Star Wars. When Sean found out that his 2nd Runners series would be picked up by ASP, I was thrilled to do a pin-up for him. It won't be in print for a while because it's slated for the extras section of the collected hardcover (after the issues are published) but I wanted to share it and hopefully get some new people familiar with what I find to be a great comic. The pinup is based on the flashback scenes from Sean's first story arc. They stuck with me enough I had to draw the old crew for myself. 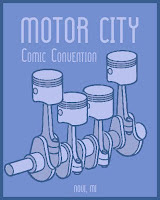 Motor City Comic Con: This weekend is the Motor City Comic Con. I'll be there all three days (though I may be leaving an hour early on Saturday to make it to a cousin's wedding) signing, meeting fans, and sketching. Motor City is always a fun show because of the close friends I have that also set up there like Jeremy Bastian and Nate Pride.

Detroit Comics Signing:
June 7th I'll be signing at Ferndale Michigan's only comic shop: Detroit Comics on Woodward from noon to three. If you are in the area, stop by!

Fan Art:
This one was e-mailed from fan Orlando Ambriz. He says he imagined Celanawe wearing clean linen robes after becoming the Black Axe.
Posted by DPetersen at 3:32 PM

I got a good laugh out of the moment where Bill Willingham was telling you what a big fan of your work he is, and then about five minutes later you said "Oh! I just realized who you are!" and Mrs. Petersen told you that she had recognized him all along.

deadlytoque: I felt pretty dumb when that happened. I tent to remember people's work more that their faces.

Julia was pretty proud through, that she was able to attach name and face and I wasn't.

thanks for posting my fan art up on your blog. its pretty neat that you do that for us fans. It made my day seeing it up. If you could I would like an honest critique of it. That is the only way people grow. I tried signing up at the Archaia Studio's Forum but I am waiting to be authorized. (been a couple of days). Hope all is well and can not wait for the next issue.

Awesome stuff David! I learns about you alot from your sister at my church. Small world is it? Congratulation on your book nominated for Eisner Award. I would like to meet you someday in the future to learn more about you what likes be full time comic artist...