Merry Christmas and Happy Holidays!
For our first Christmas as a married couple, I made a nativity set for Julia. I have loved nativity sets since I was a kid. This set I made mainly out of wooden frame stock for stained glass windows that I had left over. The textures were achieved through wood carving tools, branding the wood with various tools, and a dremmel. I also made use of 5-6 different wood stains and assembled the pieces after the stain had dried. I wasn't able to handmake a gift this year, but wanted to share this one that we love bringing out every year. I also want to wish all my fans a wonderful Holiday!

Coloring Tutorial: Dodge/Burn
Last post I showed the way that I layer my color in photoshop. This time I want to revisit the method that I 'render' the colors. I start with a base color for every area and then use the dodge and burn tool to add the shading and highlights. The Dodge and Burn tool (circled in green) allow you to lighten (dodge) and darken (burn) the colors. Each tool has a setting (circled in red) as to which range of colors it will effect the most, but that setting also effects how it darkens or lightens. I did a few quick spot samples to show that burn on medium (B-M) tends to saturate the color as it darkens, just as dodge on highlights (B-H) saturates as it lightens. While burn on highlights (B-H) and dodge on medium (D-M) desaturate as they do their jobs. I also want to point out that you can use any of the various brushes with dodge and burn and also alter the 'exposure' (strength) to your liking.

Muppet Geek:
Last week Katie Cook and I joined Jamie D, Shane, and Adam 'Murd' Murdough on Comic Geek Speak for an All-Muppet themed episode. While recording I brought up that as a kid I had the Kermit Fisher Price Puppet, but none of the others (I have them now thanks to ebay) but it led me to build my own. After the CGS show I dug out my VHS tape of me working on them and took some screencaps of me as an awkward looking pre-teen holding up my handmade Muppet puppets . The Comic Geek Speak Muppet episode is available now through the CGS IPhone app, and will be released on their website for non-IPhone users in a few months.

Ustream:
After watching Karl Kerschl do a live video stream from his drawing table on ustream.tv, I thought I'd like to give it a shot. I have done two of them now, and I really enjoyed them. I have a mic going so the viewers can hear me (as well as either see my drawing table or my PC desktop). I read the chat messages that come in from viewers as I'm working so in addition to talking about whatever process I'm working on, I can answer your specific questions. This piece is one that I inked and colored last Sunday on ustream. There are no specific times for when I'll do the next stream, but I post notices with links on Facebook and Twitter the day I plan to do one. 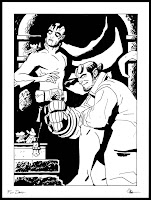 Fan Art:
Unexpectedly in the mail today a package from Evan 'Doc' Shaner arrived. He sent me this original art featuring my mice along with Hellboy and Abe Sapien! I really like that the Black Axe and the Right Hand of Doom are touching...very epic. Thanks Evan!

Merry Christmas to you too David! That Nativity set is fantastic. :) I bet you hate having to put it away every year.

Thanks for the dodge/burn tips, and thanks for doing to live vids! they're inspiring!

Love the nativity scene there. And have a Merry Xmas David and Julia :)

Merry Christmas and a Happy New Year to you and all your family David!

I haven't been able to catch one of your "live shows" yet but hope to in the future as they look very interesting.

At first I wasn't sure I wanted read your tutorials as I had a "no I don't want to see how the magic happens" kind of attitude. However it's actually increased my appreciation of your work and made me go back through all the MG issues looking at specific things.

The glasses you're wearing in those screencaps made me flashback to my own spectacled past in the 1980's. The Horror. The muppets you made are awesome and for some reason reminded me of the johnny 5 I made out of cupboard door hinges.

merry x-mas to you and julia! have a wonderful x-mas and looking forward to more of your art, storytelling and adventures.

Very cool nativity! This is completely off topic, but I was wondering if you'd be attending the heroes con in Charlotte, NC in 2010. It's the closest convention to WV I know of and I really would love to get my B&W's and hardcovers signed!
Have a happy New Year!

Jessica: Heroes is not a for-sure yet. My schedule for working on Black Axe is forcing me to cut back on cons this year. I'll post on the blog if anything changes

It seems like this is a tool that one would need to use lightly and subtley so as to not ruin or distract from the normal color and ink of the scene. I could definitely see how it could ruin it. The example you give to show the difference is a good example. You wouldn't want to paint those colors in blotchy shades like that, as the present colors already look pretty, and the dodging and burning kinda make it look well blotchy.

When would you want to dodge/burn so as to effectively add to the colors and ink and not detract?

Queue:
The desired effect should always dicate the technique you use. The blobs I did as an example were just to show you the difference in settings.

I tend to use the tools with a very low/sensetive setting.

I also think about what way I want the color to appear in the end. The bright areas around the mice mouths and bellies is one that I have to think about. If I desaturate as I go, the color makes them look old because it becomes white with the edges looking grey-ish. If I saturate as I go, it looks too glowy like they ate radium. It's a mix of the techniques that gets the colro I like.

"If I desaturate as I go, the color makes them look old because it becomes white with the edges looking grey-ish. If I saturate as I go, it looks too glowy like they ate radium. It's a mix of the techniques that gets the color I like."

Yeah, this is almost exactly what I was trying to figure out. I was thinking glowy saturated might work around a fire or something, but how would it work the rest of the time in regular lighting? And when would a desaturated highlight work? next to a window in a dark room? You couldn't use that all the time. And you don't want to force colors onto a scene when you already have a lovely color pallette going. But the mixing them makes more sense.

Okay so I decided to test out this dodge and burn stuff and see if I could use it in a way that worked for me & that I would like, and the first thing I noticed, is that I would need a lot more practice with how to use it correctly! lol. :-p But more specifically, looking at your artwork, I think that I can see here or there "oh I think I can see where he used the technique," but somehow mine starts to adopt almost an anime kind of style of shadow and highlight because the colors are so solid darker and lighter ontop the regular base color. When yours doesn't. *frown* Which is kind of what I was trying to say when I said looking "blotchy" in my first post. I also notice that you have so much texture in the color itself so there certainly is never a solid color blotch. I don't want to call it "noise" because it's not noise pixels that you just added, but it's dots of color that you added and those are really interesting to me. This coloring stuff has many more secrets I think that I'll have to discover still yet. ;-) Thanks so much for blogs and the replies. :-)

Queue: Part of the texture 'secret' is using the right brust in photoshop with the right settings. You can use any of photoshop's brushes for the paintbrush tool, the burn tool, or the dodge tool.