David Petersen: Was working on your Legends story different from how you normally work on Cursed Pirate Girl?

Jeremy Bastian: Not too differently. The only real difference is that with this story I did have a deadline (heh heh). I wrote out a script, then thumbnailed pages, then reworked them into full size roughs, penciled them out, and then put in the other 90% of the work with inking them.
David: When we first started batting around the idea of Legends, you had a story in mind that ended up not being the story you ultimately wrote and drew…talk about that story and why you abandoned it.

Jeremy: Well I had this idea I called the legend of the fire mouse. It was sorta a mission impossible for a team of guardsmice. They were to save a village of mice from a force of weasels that had taken over. In the group of guardsmice two were to insinuate themselves amongst the captives. One to start unchaining them and a second to act as an oracle, telling of terrible things that would befall the weasels if they remained. Whipping them up into a great fearfulness and leading them out of the cave they were held up in.

Meanwhile the other three were outside creating the setting. The leader of this team would be covered with a special bark, treated with a flammable concoction. When the weasels came out of the cave the team leader was set on fire and challenged the weasels. This is what the weasels had been warned about and they knew this supernatural mouse would be their destruction so they all fled.

I liked the story a lot. I pictured the first shot of the fire mouse coming out of a deer skull that had glowing eye sockets (due to captured fireflies). I really wanted to draw that. But when I was thinking it over, it just wasn't a Legend kinda story. There was nothing mythic behind it because it was really about cunning mice. I wanted something a bit more romantic.
David: Where did the inspiration for the final story come from? Were there specific elements you were including just to draw them?

Jeremy: Well I was brainstorming ideas for a new story and the idea came up of a mouse who worked for a hawk. I liked this idea because I like to draw armor and the idea of drawing armor that had hawk embellishments was very enticing. The idea really grabbed me from a design aspect, I would have to design the two warriors and the realms in which they lived. I had a whole bunch of fun with the Hawk's nest design and I think I came up with a good companion piece in the Fox's den.

In the world of your Mouse Guard anyone can see that there are specific details to the individual mouse settlements. Details in dress, architecture, accoutrements, and design. I wanted there to be specific things about the two factions but then make them feel really different from what you'd expect of the influence behind them. The Hawk's realm has some Aztec influences as well as Egyptian, but then mixed with medieval England. The Fox's realm comes from Roman influences mixed with a bit of barbarism. For me the look of a thing starts to tell the story and the words accompanying it finishes the story.
David: I want to share information about your artistic process. Lets start with the story break downs or thumbnails. You were not given a page count, so how did you go about figuring how many pages the story would take to tell and thumbnailing it all out.

Jeremy: When coming up with a page count I knew I couldn't go overboard. One- I would never finish it in time and two- there were other storytellers that needed room. When I write out a story I take a look after I'm done and just sorta mark off what I can imagine in a page. With this story I could take a slightly different approach, I could fit more into a page because it was a narrated tale and didn't have to be a complete panel to panel storytelling where you have to explain more visually. So once the story had been written I took the images I knew I had to have and thumbnailed the story around those.
David: Once you have those thumbnails, how do you get from rough drawing to pencil on your final page.

Jeremy: To get to the finished page I draw up a full size page rough. I write out the dialog and narration first and place it in the panels so I know what kind of room I have to deal with for the image. I always draw the word balloons to be a part of the page. This helps with managing time - I don't have to draw more than what is necessary- and design- I sometimes create balloons that almost interact with the art. Then I work on the business of the panel, the figures and action. When I've worked those up to what I want (and sometimes that can take a while) I can light box it onto bristol. I work at the printed page size so what you see is just how big I drew it. So a lot of the time the details I've come up with don't make it through the lightboxing stage and I need to do a bit of touch up. I like to do a lot of penciling before I start inking so that I can really sit down and ink for long periods of time.

David: I'm also am lucky enough to have seen you ink a page with a brush, but I know you used to use a pen, why did you switch to brush?

Jeremy: When I was using my good ol Microns they never really gave me the fine line I really longed for. I know Rapidographs can make a finer line but, I could never get one of those to work properly for me. I was working in an art supply store and thought I'd try as many different tools as possible to get interesting ink effects. When I picked up a 2/0 Escoda Sable round brush and tried it, I was overjoyed by the result. I've never gone back, except to use a Micron now and again for panel gutters and word balloons.

David: Do you think a lot of your drawing is really done in the inking stage?

Jeremy: Yes! I like to really cover a panel with texture and detail and almost all of that is freehand with the brush.
David: When I ink a page, I think about spotting blacks (placing large dark areas around the page to help composition) and making sure different parts of a panel have some depth through texture. I can only imagine how much more must be running through your mind as you ink. What artistic decisions are you making?

Jeremy: Ha, err well when I am laying out a page sometimes I just get carried away with wanting to do textural things. This is partly bad I know. It isn't exactly artistic as it might be considered obsessive. It does give a different experience to the reader though. I like the idea of creating a page that you can come back to and keep seeing things in it. I have (as of lately) been trying to guide the eye to the important things first with different value changes. I almost never use solid black. Why use black when you could use that space for cool wood grain... right??

David: Cursed Pirate Girl is the most detailed comic I have ever seen artistically, and while the story isn’t ‘simple’ it isn’t overly complex, so that anyone can enjoy it. I think it has multiple levels, so that an adult can read more into it and find the subtlety but a younger reader can just appreciate it as a straight forward adventure story. Was this something you aimed to do and how do you maintain that balance? 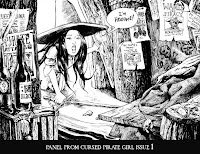 Jeremy: Yeah I really wanted to do a story for me. Something I would want to read and drawn the way I would want to see something drawn. The only consideration I had for anybody else was to make it all ages, and in doing so made it even more a piece of me. As anyone of the dozen or so people who know me can atest I am a bit of a kid at heart. It just happened that there are some other people out there who seem to like the same kind of stuff. Maintaining that balance in [Cursed Pirate Girl] is really easy, I just try to write funny stuff and draw creepy stuff. It is for all ages but I put it right on the edge of "this might give your kid nightmares", cause that's what I liked when I was shorter.
David: Where can we find out more about Cursed Pirate Girl?

Jeremy: You can always order the book online at Olympianpublishing.com if you are having problems getting it through your LCBS. Or you can ask your LCBS to order it through Haven distributors instead of Previews magazine. I do have a website jeremybastian.com and I believe that will be getting some more work done on it in the near future.

Thank you very much Mister Petersen. Even if I didn't already know you and hadn't been bewitched by Julia's lemon chicken I would still love Mouse Guard and hope to have been a part of it. So I guess it's good that I do so I can make you put me in it, Hah!


Jeremy's story The Battle of the Hawk's Mouse and the Fox's Mouse appears in Legends of the Guard #1 in stores June 2nd
Posted by DPetersen at 9:00 AM

Cant wait to see it when it comes out! Mr. Bastian's story line looks awesome!!!!! I like how he is creating a some new mouse guard cultures, the fox and the hawk, but still keeping the mouse guard spirt!! Im still hitting myself over missing the last few ustreams, I think it would be easier if I got a twitter instead of just checking the site all the time:)!
~DAB

I talked with Detroit comics about our members buying signed copies
via mail order.

I thought he had said 5 dollars per issue. Two members had received invoices that had each issue being 16 dollars each.

Do you happen to know why? I have also sent an email to you with more details
(used contact on web site) Subject line Legend of the Guard/ Jeremy Bastian Yahoo Group.

Mark: You will need to take this up with Brian at Detroit Comics. He handled all the sales. Jeremy and I were just signing issues. The printer paid for all the shipping for books that were sold to people who came in and bought issues that day (the ones my wife sent out)

Brian at Detroit comics got your list of names to us after Jeremy had left for Heroes con. Unfortunately, he leaves tomorrow for Cherry Capital Con, so he won't be able to sign more books until he gets home early next week.