Reference Model Ildur Hall:
Now that Black Axe #3 is out, I can share some of my model-madness. This issue has the mice inside a Ferret hall on the un-mapped island of Ildur. For the aestetic I wanted something Norse. Back when designing Darkheather for the Winter series, I had planned on using that influence as well. I found it difficult to imagine the underground Darkheather with the Norse visuals of the rooflines and carved beams. I found a book on Moorish architecture and abandoned my Norse ideas...until it was time to show the Ferret hall. I kept the idea that much of it would still be subterranean and underground, but the main hall could have exposed gates, shingled areas, and retaining walls.


The model is built from my normal materials: chipboard (the backs of discarded sketchbooks and bristol pads) paper, cardboard, and some balsa wood scraps. Using rubber cement, I was able to apply printed designs to the columns and shingled roof areas. The rest of the model is held together with hot melt glue (which I've started using over other adhesives because it doesn't dry out over time and lose its bond). 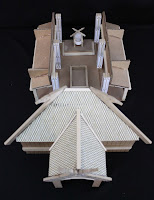 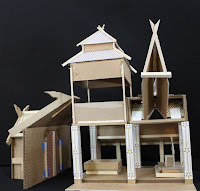 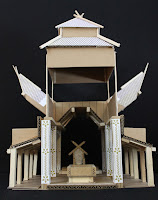 I know it seems obsessive to build something this scale for an issue's background, but I feel the issue goes quicker because of this prep work. I've explained in the past that model making helps me focus on design in a way drawing doesn't. Something about holding some wood up to a scrap of cardboard to estimate what scale the columns will be to the door, or how tall the ceiling will be seems a more intuitive way for me to imagine a space than to draw and erase architectural elevations for days. 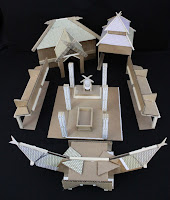 Like other models of mine, this one is modular, meaning it both comes apart and sections can be reused in other configurations. The 'real' Ferret hall would be two lengths of my model. but by making sure that details like the fire pit, the chimney-cupola, the skylights, the gates, and the throne were not connected to the main hall model, I could set up the model to represent either end of the hall. The 'wings' can come off as well, but that was so I could view the model from the side without having to view it through the restricte lower roof line there and tighter columns.


Using a tripod mounted camera and some photoshop trickery I was also able to patch together an imagined complete version of the hall model: 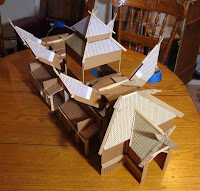 Here is a sample of some panels from Black Axe #3 showing Ildur Hall: 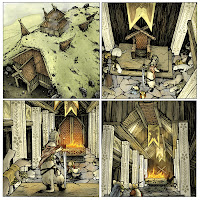