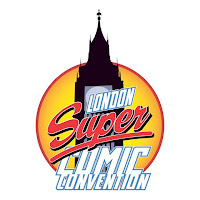 London Super Comic Con
In February, I will be a guest of the London Super Comic Con's inaugural show. This will be my first UK convention! For the convention I'll be doing commissions a bit differently than I have in the past. I'm taking a pre-order list by email. The pieces will be inked 7" x 7" on 12" square bristol for £130. I will get these done before arrving at the LSCC, so I will need to cut off the list once I have the number of requests I can handle before we depart for the UK.You MUST be at the convention in person to pick up the piece (no proxy picker-uppers please). Email me to get on the list (payments will be handled through paypal in advance)*EDIT: The 7" x 7" Commission list is now closed* . At the convention I will be signing books, selling prints, and doing much smaller commissions that are limited to 1 mouse  + 1 profession/ with 1 weapon or tool for £40 (these will be limited and as time permits).
In addition to the convention, I'll also be doing a signing March 1st at the London Forbidden Planet. And perhaps another London signing I'm waiting forconfirmation on. 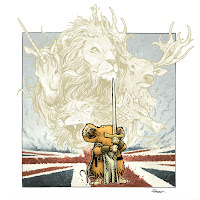 I was asked to contribute a piece of artwork for the convention's program book. This is the final artwork I turned in, and the organizers have decided to make it the back cover of the program guide! The original inked artwork used to make the image is up for grabs too! To enter to win it, you MUST have purchased a ticket for the LSCC. Email creator@londonsupercomicconvention.com with the subject line Petersen London Super Comic Convention. Include your name and your order number from your ticket receipt. Cut off for entries is Feb 6th. The winner's name will be announced February 7th on the LSCC site

Process
The process of this piece started with me wanting to do something very specific to the UK. I toyed with doing a mousey version of a few London architectural icons, but decided instead to do a piece that paid more respect to the UK than that. Using the heraldry of the countries that make up the UK (Lion: England, Unicorn: Scotland, Elk & Lion: Northern Ireland, and the Dragon: Wales) I figured a mouse could pay homage to the animal icons of the UK. I sketched out the animals looking at reference for the animals as I drew. 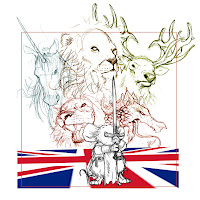 The sketches were all scanned and assembled in photoshop. I grouped the animal heraldry into a big mass with the idea of it forming something like a UK Patronus for the Guard Mouse. I resized and rotated my sketches as I came up with the final composition. The tinting was a way for me to easily see which lines belong to which animal. I pasted in a Union Jack flag and distorted the perspective to become the setting of the image. 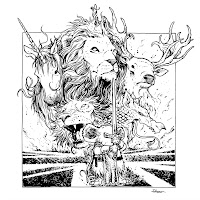 I printed out the layout and placed it behind the 300 series Strathmore bristol board I do my final art on. Using a lightbox I was able to use the layout as a guide to ink the piece. Most of my time inking this piece was to get the animal manes and fur and scales to all swirl together so that it was hard to tell where one ended and the next began. For the Union Jack, I distressed the surface texture as I inked...even making the flag seem to be disolving or being disturbed by the supernatural force of the summoning of the heraldic animals.

To color the piece I scanned in my inks, and worked in my traditional way in photoshop 7. Most of the work here was in establishing the various color holds. Color holds are areas where I choose to have the black inkwork display as a color instead of the original black. Here I have a color hold on the heraldic animals, the red and blue of the Union Jack and a few small ones on the details of the mouse's sword. The holds help push the animal figures back and to make them otherworldly. It also helped make the flag read more as the Union Jack instead of just shapes.

This is one of the coolest pieces you've ever done...just WOW!

That really does need to be a London exclusive print David - I'd buy 2!

Woah, that piece is gorgeous! :)

I'm going to have to look if I can get to this con for a chance of finally getting something signed, and say thanks in person for all the entertainment!
I couldn't live farther from London and still be in England, but I'll see if I can swing it..

It's all looking amazingly good as usual. See you there David :)

Have fun in Merry Old England. Be sure to try some authentic fish and chips while you're there.

I should hopefully be able to make it down to London on the Sunday with a few friends. Are you just over for the Con or are you on holiday? Would love a commission done but I can't think of something so hopefully I can before it's too late. I also can't decide what to bring with me to have signed! There are so many things to choose from!

Hi David,
Will you be selling previous con sketchbooks (apologies if you have said it already elsewhere)? I am coming down to London for that weekend, I'll be at the show on the Saturday hopefully.

TimB: I will have some of the 2011 sketchbooks, but any past years are sold out

Thanks David, I'll definitely get the 2011 one then. I think I got the year before from you when you offered them on here.

See you in Feb!