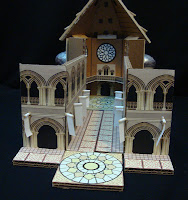 Reference Model: Shorestone Interior:
Last week I showed you the exterior model of Shorestone. To celebrate Black Axe #6's printed release tomorrow, I'm sharing the model I made for the interior of the city of builders. Like last week, there isn't anything spoiler-ish  in this post. Everything you see is on page 2 of the issue. So enjoy the post without worry. 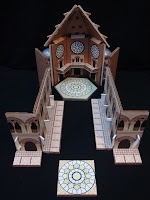 First off, you may be saying "What!?!?! he built this much of a model for what happens on ONE page of the issue!?!?!"...yes. yes I did. At the time, I figured I'd show the interior for more than the one page, but after I finished, I realized that the story had to push on and couldn't linger in this city's thorofare. And as I often come back to locations in the course of Mouse Guard (not to mention the cutaways and guides in the hardcovers) it was more than worth the time to build this model.

I already had the exterior facade model to butt this up to, and that model being locked in also gave me some detail aesthetic cues to use too. I wanted the city to feel detailed, huge, and organized. I repeated the same window design from the exterior for the archway doors and upper level windows. The floor is detailed tile work (designs taken from cathedral windows and some tiles in an Irish church) to again show the different types of craftsmice working & living here. Shorestone is like a city-sized resume for the mice there.

The walls and floor are cardboard skinned with printed paper designs. but each build modularly  so that I could access the model from different vantage points and also reconfigure it for other parts of the city if necessary. The image to the right is a bit of photo trickery. Locking down my camera on a tripod, I photographed the model walls in 2 different locations on the table. Then in Photoshop, I was able to composite them together into something even more big, echoy, and vast looking than my model. 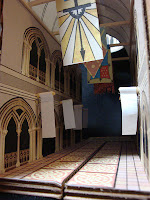 The roof section for the main hall I filled it with banners. I'd made reference to a banner from a Legends of the Guard story being hung at Shorestone (eagle eyed fans won't have trouble picking it out), so I figured Shorestone could have hundreds of banners and flags in their possession ..perhaps they display the colors of the various cities, towns, and groups their laborers made structures for.


Finally, Here is how Shorestone's interior looks in ink & digital color on page 2 of Black Axe #6 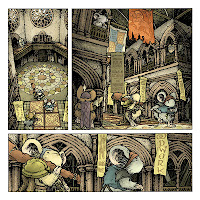 Two weeks from now I'll have another model post...hopefully everyone will have had a chance to read the issue..because the next model & post could be spoilerish. 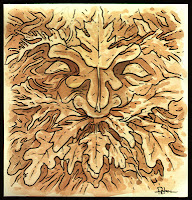 Watercolor Wednesday: Here's another look at last week's Watercolor Wednesday paintings (for those who are new to Watercolor Wednesday, I post a few original watercolors for sale in my online store each Wednesday. They are affordable and go quickly, so follow me on Twitter or Facebook for the quickest notifications of when they go live) First up is a green man, but in autumn colors. 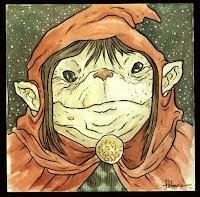 The second watercolor from last week is some sort of goblin-like fey in a red hood. No particular inspiration for these two, just what came out of the brush on to the paper. 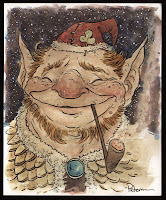 Third is what started as me trying to emulate Tony DiTerlizzi's expressions on a cliche Leprechaun. I added the scale mail cloak to try and de-cliche him, but I think now it just seems sillier.