The second issue in the IDW Turtles in Time series will find the four brothers in feudal Japan. The cover required all four turtles again and I decided to have them on horseback to continue the theme of the turtles riding a mount since I'd already had them all on the back of a running triceratops for the first issue. Even though I knew the idea of them on horseback in samurai armor had already been done in the third live-action movie, I felt there was someplace new I could go with it. For today's blogpost, I'll break down my process for creating the final cover art. 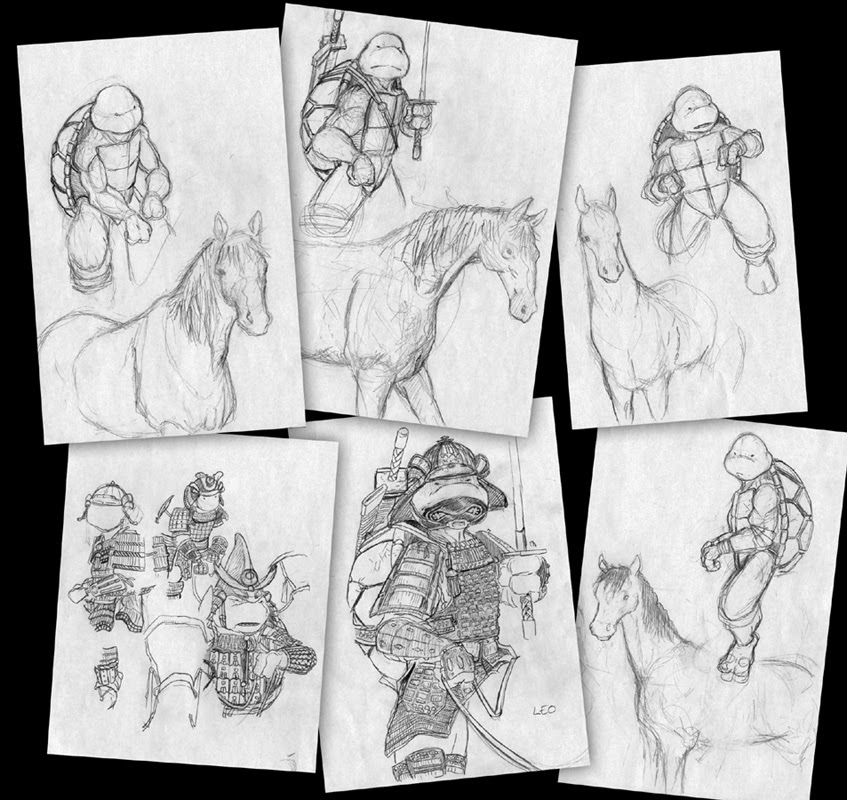 Not knowing how to get all four turtles...on horseback...in armor, into a single composition, I started with just drawing each turtle as they would appear seated on horseback. I then drew horses I thought would match their position. I didn't draw them touching, because I knew this way I could adjust their final positions. In the image to the right you can also see the armor designs...I waited to draw them until I had a rough composite placement of all the turtles and horse (next step). The armor pieces were drawn on a lightbox over top of the resized and placed characters.

After scanning all the sketches I was able to tint them (to help see which turtle was which...and to see where one horse stopped and the next started) and place together a composition. The background was designed to be very 2D to emulate a bit of Japanese woodblock printing and to not compete with the chaos that is 4 turtles in ornate armor on horseback. I did some research into the armor, but certainly made each suit my own. I tired to match some design qualities to each of the turtles. Leo's armor is the most elaborate and complete. He takes this very seriously. Raph's helmet and headpiece has sharp agressive angles and looks more worn. Don's armor pattern is organized. And Mike's is more flexible & comfortable looking. Each drawing was tinted for an easier who's-who for my editors.

The inks were done by printing out the digital composite of all my sketches and taping that printout to the back of a sheet of Strathmore Bristol. On a lighbox I'm able to see through the bristol surface to the printout and use that as a guide for inking. This means I don't have to erase pencil on the final image (though I did make a few tightened corrections in pencil before inking the whole piece). I used Copic Multiliners (the 0.7 and 0.35 nibs and a brush tip for the trees). It was tricky to make sure I wasn't adding details to the armor that wouldn't show up when the final piece was reduced for printing. In the inked version, the trees come out much stronger than my vision of the final art, but I needed a solid inked shape to manipulate in color, so it unbalances the inked piece a bit.

I scanned the inked piece into Photoshop (I use an old version: 7.0 because it still works for me and has all the bells and whistles I need) and started isolating color areas. This is called flatting where you are only painting in areas with flat colors (rather than focusing on shading or lighting effects). These Other than the background, most of these colors are wrong, and were picked on purpose to be garish and wrong. I wanted to make sure I was making all the details on the armor and horse rigging pop. To help me isolate these areas, each color you see is also a different layer (for the most part, a few times different colors are on the same layer if they do not come close to touching) For the final color scheme, I tried to incorporate a touch of each turtle's bandanna color into their armor detail.

Here is the final cover again with all the proper colors rendered and shaded and with all the lighting effects: