Last year I introduced a matted Saxon print to my convention and online store offerings. This year, I'll be adding more 5x7 character prints. The first of which I'll reveal this week is Sadie with a bee companion. Below I'll show the full process of the new Sadie print. (finished image to the left)

The print debut at C2E2 2016, and I'll have it in my online store as well as my other convention appearances.
http://mouseguard.bigcartel.com/product/sadie-bee-print-matted-8x10

To start with I sketched out Sadie on copy paper. Sadie is a guardmouse who spent a great deal of time alone in the open country. She's self-sufficient and a frontier mouse who can pathfind and star-navigate her way around the territories better than any of the other mice in Fall or Winter 1152. For this image, I decided to give Sadie a bee companion, like a ranger might have a hawk as an animal companion. It was the inclusion of the bee that led me to using clover as the background and ground cover for this image. 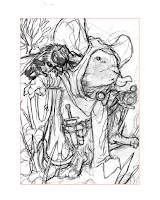 I scanned in my drawing so that I could resize it and make some corrections. The inked piece needed to be a certain size, so I scaled the drawing to fit inside that space and made some crops to the surroundings so that Sadie had a nice presence in the image. I also adjusted the bee's angle and scale. I like using Photoshop for this. I'm not at the point where I want to sketch digitally, I like paper and pencil too much, but making digital adjustments is a great way to speed up productivity, but also allow you to experiment and improve your composition without re-drawing or erasing.

Once I had the above layout set, I printed it out on my home printer and taped it to the back of a sheet of Strathmore 300 series bristol. On my Huion light pad I could see through the surface of the bristol to the printout to use as a guide as I inked without needing to re-pencil the drawing. I inked it with Copic Multiliner pens (the 0.7, 0.5, & 0.3 nibs). Readers of my blog know I like those pens. Even though they are felt tipped (like Microns) they stand up to all my stippling and never break or get fatter as a result. 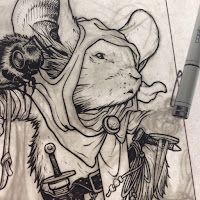 I tweeted this photo I took in-process with my phone as I worked on the piece. I try and establish the major outlines to the character before going in and doing much rendering on any area (though here I did do the cross-hatching in her ear). Before I used Multiliners, I used Uniball Vision office pens. One of the things I think improved when I switched tools is that I became more concerned with varying my line weight. And not just the heavier lines for the outer contour vs the thinner inner lines, but also the change in a given line like the fur around the face or the wrinkles in the cloak.

After the piece is inked, it's time to scan and start the coloring process known as 'flatting'. By laying in flat colors to establish the different areas of the image (the fur color is different than the cloak is different from the sky, is different from the clover, etc.) it makes it easier to isolate and render each part in the next step. You don't always need to be placing down the right colors in this step, though here I did try to establish my final palate. I went with a yellow sky to be the natural complimentary color to Sadie's purple cloak 9something I'd already thought about when drawing the bee)

Here again is the final image after I rendered the colors using the Dodge and Burn tools in Photoshop with a textured brush.

Again, I'll have this print in my online store as well as at my other convention appearances.
http://mouseguard.bigcartel.com/product/sadie-bee-print-matted-8x10

I heard you used Dodge and Burn to color. That blows my mind. Amazing work as always.