Last year I introduced a matted Saxon print to my convention and online store offerings. This year, I've added Sadie. And this week I'm revealing Gwendolyn in her Matriarch Chamber. Below I'll show the full process of the new Gwendolyn print. (finished image to the left)

The print debut at C2E2 2016, and I'll have it in my online store as well as my other convention appearances.
http://mouseguard.bigcartel.com/product/gwendolyn-print-matted-8x10 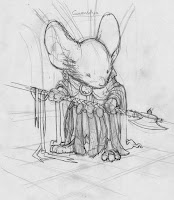 I drew this version of Gwendolyn on copy paper. I didn't know what the background should be, but decided since Saxon & Sadie were outside, Gwendolyn would be a good mouse to have an interior architecture background.

I didn't know what interior space to use through. An existing location in Lockhaven, a cool stone arch pattern or window? I didn't go further than what you see here and decided to figure out the background in the next step after I scanned the drawing. 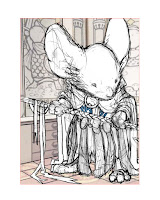 In Photoshop, I was able to size the drawing and crop it to suit the needs of the print. I then tried out a few stock images of arches and windows to get a feel for what would work. I ended up pulling my Matriarch Chamber model off the shelf and photographed a corner of that for the background. In this step I was also able to resize and fix the scale and angle of her pike axe head (which only just enters frame now). The last ting I did before printing this out was to add in a celtic knot pattern I've used on Gwendolyn's tunic before.

Once all that digital tweaking was set, I printed out the layout on my home printer. I taped it to the back of a sheet of Strathmore 300 series bristol. On my Huion light pad I could see through the surface of the bristol to the printout to use as a guide as I inked without needing to re-pencil the drawing. I inked it with Copic Multiliner pens (the 0.7, 0.5, & 0.3 nibs). I avoided inking the stained glass details right up to the lead lines or the tile floor pattern right up to Gwendolyn. This makes isolating those lines for color holds easier in the coloring step. 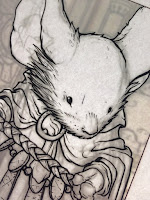 I tweeted this photo I took in-process with my phone as I worked on the piece. I try and establish the major outlines to the character before going in and doing much rendering on any area (though here I did do the cross-hatching in her ear). Before I used Multiliners, I used Uniball Vision office pens. One of the things I think improved when I switched tools is that I became more concerned with varying my line weight. And not just the heavier lines for the outer contour vs the thinner inner lines, but also the change in a given line like the fur around the face or the wrinkles in the cloak.

After I finished inking the piece, I scanned the inks into Photo shop to start coloring. First step of that process is called 'flatting' where you color each part that is a different color with just flat colors and stay within the lines. For the room, I already had a color palette because of the room appearing in The Black Axe. Gwendolyn had also been established color-wise, but I just did my best eyeball match for her fur and clothing colors.

The last step is to render out, shade, highlight, and texture the colors. I use the Dodge & Burn tools with a textured brush to accomplish this.

Again, I'll have this print in my online store as well as at my other convention appearances.
http://mouseguard.bigcartel.com/product/gwendolyn-print-matted-8x10