FOX has acquired the rights and is developing a film for Mouse Guard! The film is planned to uteize the same performance capture/live action technology used by Dawn & War of the Planet of the Apes and The Jungle Book. Attached are Matt Reeves (director of the aforementioned Apes movies) to produce and Garry Whitta (Writer of Rouge One) to screen-write. BOOM!'s Ross Richie & Stephen Christy will be producing alongside Matt Reeves. I also am a co-producer on the venture. This is all VERY exciting! 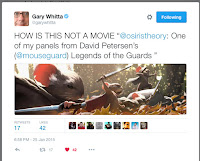 Let me tell you one reason I'm so excited about this team at this time. Back in January 2015 Gary, having already been a Mouse Guard fan and seeing Ryan Lang's work from Legends of the Guard, casually tweeted this: "HOW IS THIS NOT A MOVIE" along with an inserted image of one of Ryan's tweets with a panel image. He wasn't vying for a job, or pandering, he was a fan first, who wanted a Mouse Guard movie. In my time talking with, working with, and skype-ing with Gary (he has been very generous to consult me all along the way) I know he's the right person for the job. He understands deeply what Mouse Guard is and stands for and he understands what (if much at all) to change for the difference in comics & film mediums.

Matt Reeves has done a fabulous job with the Apes films to have a special effects spectacle/intesive movie where story comes first in every sense, and the effects aren't layered on, but woven in. He understands the challenges in this type of filmmaking and storytelling. And Ross & Stephen have always had Mouse Guard's best interests at heart because of their position at BOOM!/Archaia. 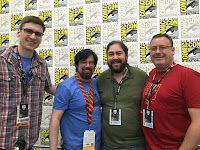 Last week at SDCC we had a Mouse Guard panel where editor Cameron Chittock gave a few quick updates about upcoming Mouse Guard publishing, and then dove in to Mouse Guard Movie talk with Gary and I and rounded out the panel with a live-reading of the 2016 Mouse Guard FCBD story by Hal Lublin.

Below is cell-phone video of the movie talk portion of the panel in case you missed it and wanted to hear Gary & I talk more about our thoughts, hopes, and dreams for Mouse Guard on the big screen.

This is indeed very exciting!

It is good to hear that this movie will be made by guys who know Mouse Guard universe and cherish it. That gives us fans some degree of hope that this adaptation will be accurate and through that- great.

What everybody else said.
:D