Today Mondo is releasing a Mouse Guard Fall 1152 Silkscreened 24" x 36" poster!!! In the past I've done two posters for MONDO: Brave & The Rescuers (you can click those links to see the process blogposts for those posters), but getting to do a Mondo poster for my own book series, is all the more amazing!!!

To the left you can see the final colors for the print, and below I go through the process from sketch to separated color file sent off to the printer:

For the Fall 1152 poster I needed to re-create the events of that book in one image that summed everything up. No problem, right? Harder than you think. I started with the idea that I should have the 3 main mouse characters as well as the snake (everyone still remembers that scene from the first issue). So, I sketched on copy paper, Lieam, Saxon and Kenzie with the plan to put Lieam front and center, with the other two either side of him. The snake would loom up over them from behind.

I then decided that I needed to show Midnight too...his part of the story was too big to ignore for a poster...and as a way to show this is an image for a graphic novel series, I added a horizontal panel at the bottom for Midnight's army in the rain. (Sorry, I don't have the original pencils of Midnight handy as-of the typing of this post) I composited the sketches (tinted different colors to help me make sense of the line-spaghetti) in Photoshop and added some border treatments, type, and a rough color scheme. 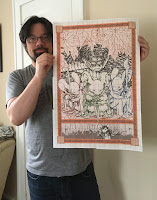 The poster is 24" x 36", but to make my life more manageable, I didn't do the artwork at that scale. to make sure I could ink the piece and have it still fit on my scanner (in 2 passes) I worked at 16" x 24". I printed the layout on multiple sheets of letter-sized paper and taped them together (the grid you see in the photo is to help me re-allign the pieces of paper into a single taped-together image). I also dropped out most of the color-scheme to save some ink and to make the lines easier to see. 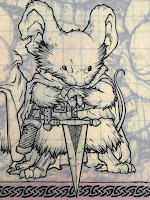 Once the printout was taped to a large sheet of Strathmore 300 series bristol, I started inking the piece on a large lighbox. I used Copic Multiliners (the 0.7 & 0.3 nibs mainly). Below you can see several photos in-process I took as I inked to show my editors & friends: 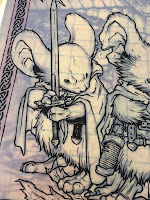 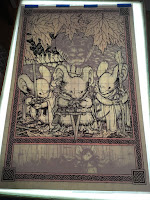 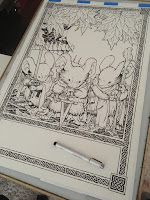 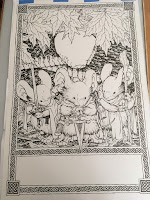 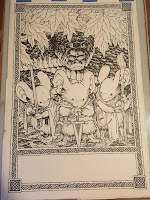 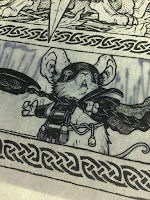 Here are the final inks. I added the rain on the back side of the piece and scanned it separately so that I could easily isolate those marks as they overlapped Midnight & his army. I had to ink this  on and off for several days because it was around this time My Mom, who has Parkinson's & Dementia, came to live with us so we could be her caretakers. It made the work go a little slower only being able to ink when she was asleep, resting, or deep into a TV show.

As I said above, I scanned the inks at high-res (600) in 2 separate passes on my scanner (I also had the misfortune to need a new scanner just as I was ending this piece and had to install and learn the quirks of the new scanner for this one. 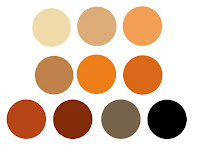 For the coloring process I had to limit the palate to under 10 colors. Here was my initial pass, but after the folks at Mondo helped me out getting all the technical specifics worked out with the separations, we ended only needing 8 colors.


Below is the final file sent to the printer for silkscreening. Knowing Mondo poster sales, these may allready be gone by the time this post goes live, but check with MONDO to see if they have any left!! 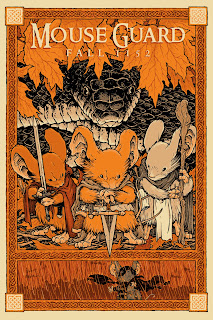