Jesse Glenn (real-life Kenzie) and I have started a video podcast called 'THE PLOTMASTERS PROJECT" Where he and I revisit our oldest characters and stories and then each create a new piece as an exercise. For our first episode we looked back to the first project we ever worked on together: CATS TRIO! I've blogged about Cats Trio in the past, but to quickly summarize, it was a TMNT homage where three mutated/anthropomorphic cats befriend a similar raccoon as the group discover their shared origins, survive in abandoned places away rom human eyes, and avoid being hunted by another of their kind.  To the left you can see my new finished piece for The Plotmasters Project, but below I show the process from sketch & concept to finished colors.

I also want to state, that Jesse and I have no current plans to develop Cats Trio (or any of the subjects for our series) beyond these exercises. 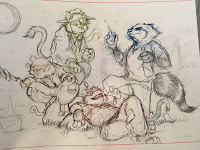 The first order of business in creating this piece was to review the archive of Cats Trio stuff Jesse and I have as well as look at some of my most recent attempts to draw the Cats characters. Back in 2011 (20 years after Jesse and I first drew them) I started this piece. I was looking for something that spoke to their transient lifestyle. So they are out of doors, in the field near their abandoned farmhouse, cooking, drinking, and relaxing. But I never really took this piece further than this rough stage.

Much more recently, in 2016 (25 years after Jesse and I first drew the Cats) I did these pieces on toned paper at a sketch session with some other artists including Jesse. I inked them and added white like i would a typical toned paper commission, and then colored them digitally using the same technique for my Gotham Academy story. I felt really good about these headshots. They felt like the old friends, but not outdated or stuck-in-time artistically. These headshots and the unfinished outdoor rough above formed the foundation for my new piece. 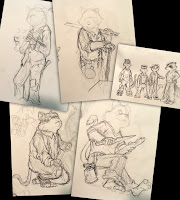 My plan was to do a mock cover. It would feature all four of the main characters, have the transient outdoor vibe, and the feel of the headshots. I started sketching new poses for each character. As I drew I kept wanting to add details of gear they'd each own that not only help tell the story of what they do on a daily basis, but individually give them personality (flasks, canteens, binoculars, kitchen knife, kerosene blowtorch, wieners on a skewer, a beat-up roadsign, etc.). The only problem I had, was that I didn't like any of the new heads I drew better than my toned paper pieces...

...So, as I composited the figures together into a photoshop cover template, I also plopped in the headshots in place of new sketched heads. I also wanted to show their house, for what may be, the first time it's ever really been seen. It's an abandoned derelict farmhouse far away from prying eyes. Jess and I always had them using the basement as shelter, so when searching for reference (which I didn't redraw, but just dropped into the  rough) I liked the photo of a farmhouse where part of the roof is missing and all of the windows are broken and missing. As per usual, I tinted each character's sketch to help me understand what lines belong to which character.


Below are some in-process shots as I inked and tightened up pencils (I inked this with the above rough taped to the back of my bristol board on a lightpad, but had the light off when snapping these shots. 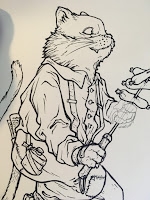 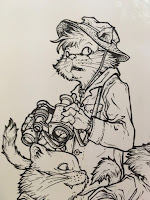 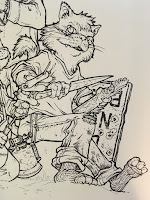 As I said above, I inked this on a Huion lightpad with the rough printout taped to the back of a sheet of Strathmore 300 series Bristol board. I used Copic Multiliners (the 0.7 and 0.3 nibs...tough I did also resort to a 0.2 in a few tricky spots). I tried to keep the contours more important than the textures, but for their fur and some of the bits of their clothing and inventory, I had to add some dings, scratches, wear, and dents. When inking the house, I made sure I didn't ink those lines directly up to the characters. This helped me isolate that linework in the next coloring step, but also allowed a bit of breathing room around them and gave them some depth-of-field distance from the background.

After the inks were finished, I scanned them into Photoshop and started the coloring process by isolating the inked linework of the background and doing a brown color hold on it, and then laying in flat colors. This process of adding the color is called 'flatting' and is like the professional act of "coloring within the lines". It establishes that the various parts of an image are different colors from one another. This allows me, as I render the image, to quickly isolate each section to either shade and highlight it independently of the other parts or shift and adjust the hue & contrast.

Again here is the finished 'cover' with a "Cats Trio" typeface logo treatment. For the Plotmasters Project, I do not always intend doing something as big and as involved as this piece. But Cats is very special to me. These characters feel like old friends. They occupy a special place in my heart that idealizes a great time in my life. So I wanted to give them the respect and level of quality they've deserved from me for years.

You can watch the CATS TRIO episode of
The Plotmasters Project on YouTube:

Labels: From the Vault, Plotmasters, Process