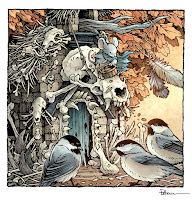 As I work towards filling up the pages for my next published sketchbook, I've been streaming the art process on Twitch.

'Alone Together', a 24 page color sketchbook of pieces like this will debut in April of 2022.
To the left you can see one of those pieces finished and colored ready for a page in that sketchbook––and in this blogpost I'll break down the process to get there.

The idea for this piece came from a photo shared on a Twitter account that shares abandoned architecture. I wanted to do more with this little chapel though, and make it spooky. A boneyard with the structure adorned in various animal bones. It's something I've shown the character of Bastian eventually doing with his Skull-Yert dwelling in The Wild Wolf short story. This time I wanted to have some little nuthatches bobbing around the place. 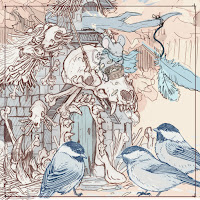 I drew the structure on one sheet of copy paper and then the birds and mouse on another. In photoshop I was able to arrange the scans into a composition I liked. I tinted each element and added some quick color blocking to help me see the shapes and forms easier.
The mouse originally had a crossbow, but it looked too much like he was threatening the birds, so I decided he could be feeding them instead. Perhaps he uses the bones and animal pieces for raw materials useful to the mice, but then casts the waste out for other critters to eat, 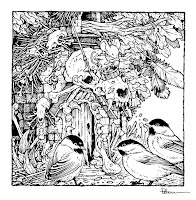 I inked the piece with a printout of the above layout taped to the back of a sheet of Strathmore 300 series bristol. On my Huion lightpad I can see through the bristol down to the pencils and use them as a guide while I ink.
I used Copic Multiliner SP pens (the 0.7 & 0.3 nibs) to ink this as I streamed on Twitch, answering fans questions as I worked. 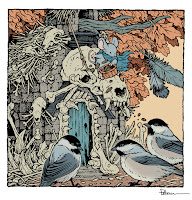 When the inks were finished, I started the color flatting (the first step of digital coloring where you establish all the color spaces with flat color). The palate was meant to play mostly fall yellow-oranges off of steely blue greys.
Normally this is also the step where I'd add all my color holds (areas where I want the ink lines to be a color other than black) but this is a rare piece for me these days where I didn't have any.
Below you can see the final colors all rendered withe the Dodge and Burn tools and ready for inclusion in the sketchbook I'll release this year. 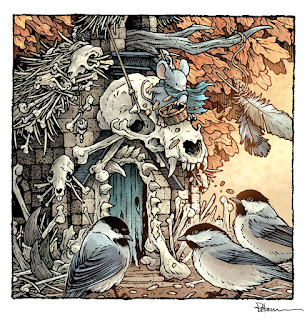