If things had gone another way... 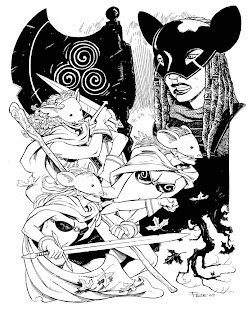 At a recent Motor City Comic Con, Jeremy Bastian, Nate Pride and I were noticing the typical behavior of some booths to resort to having all-girl cast in the comic so they can have booth babes that glom on to any passers-by in that aisle. It can be rather distasteful when the women will almost pull people from other tables and back to theirs.

I made a joke that I almost took Mouse Guard that direction originally, but I ended up going with mice. I guess this got Nate thinking...and last night he gave me this awesome inked drawing!!! It's the 'what if' of an all human female MG. HAHAHAHAHA!!!! I love that he gave the 'Lieam' character the full & fluffy hair and 'Kenzie' the rougher wirey hair...all the while making them hotties ;)

Unfortunately, I don't have a new piece to show, but I'll repost a few oldies that were on my site a while back: 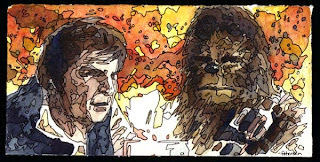 A scruffy-looking nerf herder and a walking carpet.
This was one of the first of the outlined watercolor style work I was doing a few years back. I was still using left over wedding invitation paper stock (we handmade our invites). 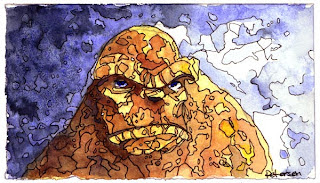 And Clobberin' time Ben Grimm. Same story on this being an early piece. I was experimenting with different salt on this one (salt is used in watercolor for an effect. When salt is sprinkled onto wet watercolor the salt grains repell the pigment leaving you with low color splotches with 'rings' of color around them. My wife likes to cook so we have a variety of salts: sea, kosher, table, coarse...)

Posted by DPetersen at 1:06 PM

David these look great! I love the Han and Chewie.Have agreat weekend!

David, i have always loved how these watercolours pieces looked..you sure you won't be doing more of them in the future?