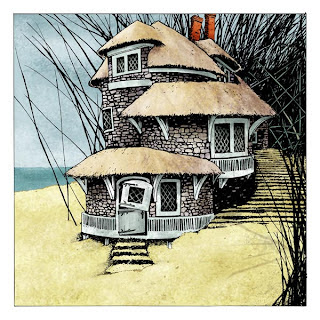 I have been planning on a new sculpture project for some time now. Time, the size of the project, and my current workload have prevented me from getting much farther than the initial planning stage, but I do hope I can start after con-season.

I know, I know...I'm being secrative.


But the picture on the left should give a clue as to what I have planned.

This is a small head that I sculpted in '99. It took about three hours from sculpting to making a mold and then casting it in plaster. I was going for an old mummified/applehead look. The finish is urithane and wood stain. Currently this little guy sits on my comic bookshelf, propping up a spot between Craig Thompson's Blankets and Rick Geary's Victorian Murder books. 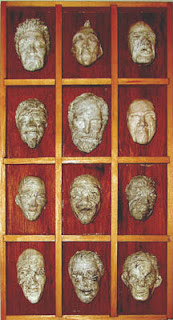 This oddity was sculpted in the same semester as the previous head.
I loved in the behind the scenes photos of Nightmare Before Christmas (one of my favorite movies) that to catalog and store Jack Skellington's various heads, there were trays (which reminded me of old typesetting trays) with an array of expressions staring back at you. My goal was to make a similar box/tray with human faces.

I quickly ran out of time and so only two of the faces turned out as well as I would have wanted (one being a slight likeness of the person Lieam was based on). It's an idea that if I had more time, I'd push farther: tighter boxes, more expressions, more heads, etc.

The sculpture now lives at the home of Guy Davis, who, for some reason, liked it enough to want to own it.


My next post (shooting for Friday) will have new artwork and an announcement!!!!
Posted by DPetersen at 3:57 PM

I keep looking at looms of the Iron Age Celts, drawing sketches and wonder if I could make a teeny little drop spindle with some roving and yarn.

Hey David-can you add a feed for those of us who like to recieve updates via email? Out here in Flushing boonies, its pretty boring at 2 am without email.
I just oedered the hc of Mouse Guard to save wear and tear on the soft covers. It will be my gift to me for a change!

Spring: I think it would be awesome if you went ahead with your mini loom project!

Jan: I don't know how to do what you asked for.