Due to being in Ireland, this week is a continuation of the list from last week of artists whose work I collect:

Joao Lemos:
I found out about Joao's work when Marvel's Avengers Fairy Tales #1 came out. I met Joao in New York two years ago when he was visiting from Portugal. He showed me a journal he had kept for a year in preparation for the Peter Pan story in AFT#1. It was amazing, he had stage plans from the original Peter Pan production, he had drawn characters and settings that were not in the script, just so he got a sense of all of this version of Neverland. I loved Joao's interpretations of the other Avengers as Lost Boys, so I asked him to do this commission for me. You can check out Joao's blog here: http://sete-estrelo.blogspot.com/

Guy Davis:
I had been following the first few issues of BPRD when I first met Guy. He won an ebay auction on a sculpture I made and let me drop it off to him personally. Guy is one of the kindest people in comics you can meet (He also named Conrad in Mouse Guard). No one can out-do Guy for horrifying creatures either. I have several pieces from Guy, but wanted to share this page from Nevermen that featured an octopus-headed villain I really liked named Honshu. You can find Guy's site here: http://www.guydavisartworks.com/

Craig Rousseau:
Craig's work I discovered through the Hellboy.com forum years ago. Craig is known for his artwork on the Perhapanauts as well as his great Canson paper commissions (which I am in line for currently). A few years ago Craig and I were at the Marriot lounge at San Diego and I noticed he was just sitting there while other of us were catching up on show commissions etc. I handed him some scrap bristol and he sketched and inked this Choopie for me. You can check out more of Craig's work here: http://www.craigrousseau.com/

Alex Sheikman:
Alex's book Robotika was part of the 'first class' of books brought into Archaia. Naturally we met at one of those early Archaia booths, and Alex and I hit it off instantly. One of the things I admire the most about Alex is his constant desire to improve every part of his work. He examines others work and dissects it and then dissects his own looking to make the next story, page, panel better than the last. Alex and I did a page trade for this one. His inks are so tight and precise. I liked this page because it had some of everything: action, setting, close-ups, the works! You can follow Alex's blog here: http://sheikman.blogspot.com/

Rebecca Guay:
I knew of Rebecca's work through her Magic Cards (I played frequently back in the late 90's). At my first San Diego Comic Con I saw her pages for sale (grossly under priced) at her booth, but I had run out of money. The next year, with Julia there, we found Rebecca's table and the pages I had admired before were still available. We couldn't pick between two (the stained glass in the one on the left and the cottages on the one on the right), so we got them both. You can find Rebecca's site here: http://www.rebeccaguay.com/ 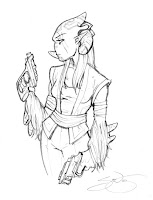 Sean Wang:
After reading Sean Wang's Runners book I e-mailed him telling him how much I liked it. Sean has a real mind for detail, not just detailed linework, but detailed designs and worlds. He take great care in designing his fictional sci-fi world. Everything from clothing to customs, to ships, guns, and furniture are carefully crafted to be believable. Sean did this sketch of Grissom, one of my favorite alien designs he's done, while we were both an the New York Comic Con a few years back. You can follow Sean's current Runners series twice a week at: http://runnersuniverse.com/

Mark Smylie:
Mark's book Artesia is fully painted epic fantasy. I admired Mark's work even before he became my publisher back in '06. I had my eye on a few pages from Artesia Afire featuring some cool ghosts. It took a while for me to get over those pages being sold before I saw this page (also from Afire) that I really liked better. While Mark is known for his huge military-style armored warfare scenes (as well as Artesia's adult scenes) this page offered a nice slice of life that I think shows Mark is a skilled world-builder. You can find out more about Artesia here: http://www.artesiaonline.com/

Jason Shawn Alexander:
The first original artwork I ever purchased was from Jason. It was my first San Diego Comic Con. I had gone with Jeremy Bastian, met a lot of great people in person, and showed Mouse Guard to Archaia. I ended the trip on Sunday by getting this page. I didn't know anything about Jason but that he was rumored to be working on an Abe Sapien mini-series. The third panel on this one is what sold me. You can check out Jason's blog here: http://bloodandwhisky.blogspot.com/

I have a quick question will there be a leading female character grace the cover of a Mouse Guard book?? Btw when will you release your schedule for 2010?

Technicly Sadie was on the front cover to Winter #3 (and has been on the back cover of Fall #6 and Winter #1).

But yes, I do plan on having a Black Axe cover with a female lead.

physicians.blogfa
day-news.loxblog
Would-be medical exec from Iran barred from Canada over alleged ties to Tehran's nuclear program. Ramin Fallah was labeled a security threat because he ...

زیرنویس سریال The Falcon and the Winter Soldier 2020