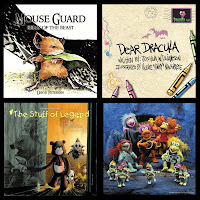 Square Format:
When Mouse Guard first came out, one of the things people noticed about it right away was it's odd format. There were folks who loved it for being different, and folks who hated it because it was hard to store or display. And while it was an unusual decision on my part (and Archaia's willingness to publish it that way) it seems that the square format is becoming more popular with titles like Dear Dracula, Stuff of Legend, & the upcoming Archaia Fraggle Rock comic. 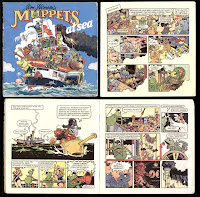 There have been unusual format books before Mouse Guard, so be sure I'm staking no claim on the idea. Though I had never seen another square comic until I started Mouse Guard...or so I thought...

As a kid I had a Muppet comic called Muppets at Sea. It was lost at some point and a few years ago I remembered it and tracked it down on ebay...only to find that it was an 8" x 8" square comic! The panel borders even tend to be divided on the 1/3 page lines. I have no clue if the residual memory of this book (I didn't own a copy when I started Mouse Guard and hadn't seen mine in a decade) influenced my format or not, but it was fun to see the commonality. 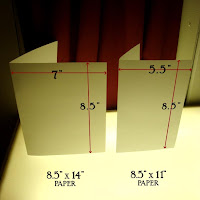 My path to square started with the idea of mini comics (comics made by folding standard copy paper in half). To stand out, I had the idea of using legal sized copy paper (8.5" x 14") instead of the traditional letter sized paper (8.5" x 11"). This would give me something different without increasing my costs like colored paper stock or color printing would. The resulting mini comic had a heavier horizontal weight and I liked that. And though I never ended up printing a mini comic, the few sketches of panel layouts I did helped me see my horizontal bias.

Because a traditional comic page is vertical, it forces the artist to draw panels that either tend to be more vertical, or horizontal panels that are not very tall (the taller you make them, the less horizontal they feel). I like panels that feel like a David Lean movie, epic, vast, sweeping, with room to breathe. And I find that horizontal panels on square pages give me that sense more than on traditional pages. Here I have taken two pages and compared panoramic panels. The square format feels easier to read and doesn't get lost on the page. (and though the last panel on the traditional page is similar in size to the horizontal panel on the square page, I argue that it doesn't 'feel' like a panoramic panel in that format) 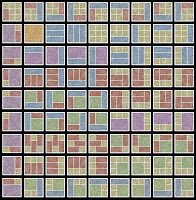 As I mentioned with the Muppets at Sea comic, I tend to break the panels on the 1/3 lines (or the 9 panel grid). There have only been a handful of times that I have strayed from those grid lines. I find comfort in having a set grouping of panel arrangements to work in, but still a great deal of freedom because with mirroring or rotating those panel arrangements, I have lots, and lots, and lots of options (shown here are still not every combination of readable layouts).
I'll tend to pick a moment in the page that I feel is most important, and then pick a panel shape that fits that image. I can use this sheet to help me figure out how the remaining panels could fit (if they don't I start refiguring until I get a layout that works) 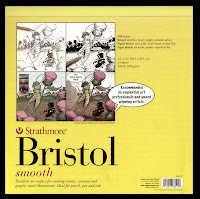 Last year the folks at Strathmore Paper approached me to do illustrations for and to promote their new line of sequential paper line (with Katie Cook and Tommy Castillo). I was already using Strathmore at the time, so I was excited about the idea. While I had them there, I asked for a quote on having them cut and bind custom pads for me at 12" x 12" of their 300 series bristol. I had been buying 14" x 17" and trimming each sheet down. They offered to make it part of their new line of products for comic artists. I explained that it isn't a standard size for comic artists and doesn't really belong there, they smiled and included it anyhow. Guess they were on to something.
Posted by DPetersen at 5:33 PM

That was your doing? Thanks!!! I'm doing my new comic project on that exact paper. (Hoping my publisher doesn't mind).

Yah I saw those in my bookstore of my college, nice surprise!!! Should by some of those paper... I'm still working my comics on print paper 8 x11.

what a great request on the paper size, which the company seized as an opportunity. great job!

I wouldn't mind having some of the square pads myself, with the piles of cutoff scraps I've got lying around.

Until I make some cube paper that is.

That's so cool! I do love Mouse Guard's square format. I love the panel layout illustration. I have similar panel configuration setups for design projects I do at 8.5 x 11. Except I use a 3x3 and a 2x3 grid, which gives even more combinations. What you say is definitely true. It's really helpful to have that preset structure to work within. It helps you get started, and it has tons of freedom within it. That's really interesting how your path to square started with mini comics on legal! I have mini comics that I drew as a child, and they were drawn on folded 8.5 x 11 booklets. Hmmm yeah that's about all I have to say. Another fabulous behind-the-scenes post!

Square never phased me. I realize it's non-typical, but the crushing mountain of children's books at my home that even Carolus Linnaeus would find hard to work into a dichotomous key softened me up.

I am absolutely overjoyed you shared your 9x9 and combinations chart. Pleased to find you geeky and thorough enough to have it. Thanks!

Well, we certainly love the square format as well. You inspired us to make Beautiful Scars a square book! I love how it stands out on the rack.

I often would draw in square paper (and in Europe artists are not restricted to what format to use, as long as it is good)...comics and other stuff and prefer it,...I'm glad you broke the rule in America (even though I've seen it in small press)...now that Strathmore is doing the paper {I hate cutting my own} I will use theirs, I wish they made it also in 8 x 8 as other companies such as Sennelier make them {watercolor paper}..anyway, square format feels more sturdy in hands and in my opinion is easier to store in book cases.