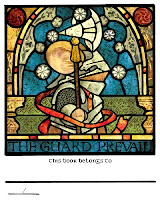 Like last year, I'll be offering a new bookplate this year. For those who aren't familiar, a bookplate is a small decorative card that is pasted into the inside front cover of a book from your personal library that distinguishes itself as yours. For last year's bookplate I did a relief print to create the image. This year I designed a stained glass window. And though I've done stained glass work before, I didn't make a real window to create this image. Here was the process:

While viewing stained glass in churches and cathedrals on a recent trip to England & Scotland, I got the idea to use that imagery for the 2013 bookplate. When I returned home and started searching for more imagery for inspiration, I found this section of a window in the Church of St Andrew, Temple Grafton, Warwickshire, England of a Templar Hospitaller. I liked the arched & architectural framing around the figure's head & the title at the bottom. So, I essentially stole those elements when making my own design.

In Photoshop I mocked up the elements from the Templar window that I liked using line tools with a thick stroke to emulate the lead came that holds stained glass windows together. The mouse knight was first sketched in my sketchbook and then added and cleaned up for the digital layout. I added in a few patterns & designs to the layout. I decided the circles around the mouse's head would be stylize stars instead of the Templar's flowers.

Having working knowledge of cutting glass came in handy. There are certain shapes it is impossible to cut glass into by hand. While inking the lead came design onto bristol (using the digital layout above as a guide on my lightbox) I kept those shapes in mind, breaking complex glass areas into multiple pieces with another came line. To emulate the painted and fired look for the mouse, his armor, & other elements, I returned to the lighbox and on a separate sheet of bristol, drew the 'painted' details in with pencil. 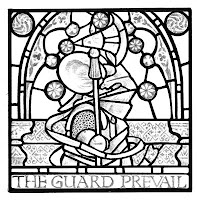 After scanning both the inked lead came artwork and the penciled 'painted' artwork, I was able to combine them into one image. I kept the 'painted' layer separate from the lead came layer because I wanted to be able to come back and tint and lighten/darken those areas without effecting the lead came layer. With both layers set to 'multiply' (a photoshop layer blending mode that allows new layers beneath these to be visible in the white space) I could start 'coloring' the glass piece... 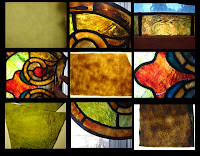 But I didn't want to do my standard coloring techniques to emulate the look of glass. I've done that a few times in the comics, but for this piece, I wanted it to look more like a real window than an illustration of one. I took photos of some of the antique stained glass in my home as well as glass scraps I have from my childhood church. Using the photographed swatches, I populated the glass-less voids of my design, tinting, fixing value levels, and adjusting tones as I went.


Here is another look at the final result sans-bookplate text. 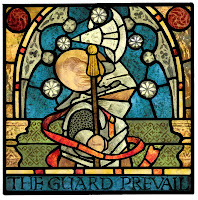 The bookplates will be a signed and numbered edition of 750. I'll be debuting the bookplate with this artwork at my first comic convention of 2013: Emerald City Comic Con in Seattle, WA the 1st-3rd of March. Sometime after that, we will be offering the 2013 bookplate in the online store 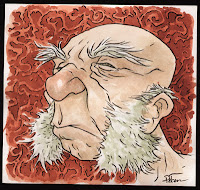 Watercolor Wednesday: In case you missed last week's Watercolor Wednesday pieces, here they are again for a closer look. Both of these were just for the excuse of painting characters that were odd looking and distorted. The one to the left I called the 'Mutton Chop Guru'. Originally I was going to have the pattern in the background originate from his lips like he was exhaling some poetic lines & symbols, but opted for it just to be background instead.

The other guy, simply titled 'newspaper hat' was some amalgamation of characters from Alice in Wonderland, Wind in the Willows, and perhaps a Roald Dahl book or two. 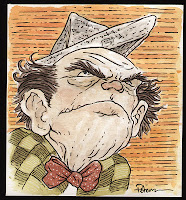 I missed out on the uberdoodle B&W Winter. Do you plan to do any more?

I Uberdoodled up all the copies I had. Archaia still has copies available for sale through their site, & I can uberdoodle one at a convention (I don't do them by mail)