As many of you know, I'm a big supporter of Jeremy Bastian's Cursed Pirate Girl comic series. Jeremy's work is AMAZING! and I was honored when he asked me to contribute a new piece for his hardcover collection with Archaia. The new collcetion has a section at the end called "The Royal Portraiturist". Jeremy wrote quotes as though they were eyewitness descriptions of Cursed Pirate Girls deeds, then Jeremy chose a group of artists to draw those descriptions. 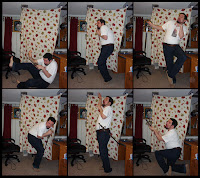 I was given the description: "This little girl fought, and those fine swordmasters the king bought, the ones said to be unbeatable...well they wee made out to be naught but frilly baboons."

Because I was going to be drawing a lot of humans (unusual for me) I started by taking photo reference. I took a picture of my oldest niece as CPG, and multiple photos of myself. Unfortunately, it looks like I deleted the original untouched photos of her in Ugg boots grimacing at unseen foes & gripping unseen swords. I do have this embarrassing grouping of photos I took of myself reacting like scared "frilly baboon" swordmasters. 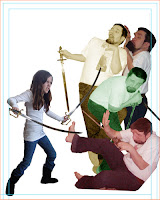 Because Jeremy's characters often have distorted anatomy and exaggerated features, I used the 'Liquify' tool in photoshop to warp the photos I took until I liked the characters that were emerging. I had to alter my niece as well. I made her head much larger in proportion to her body and altered her arm and hands a bit too. The composition of the swordmasters was arrived at by just moving around the various photos until they pieced together in a way that everyone was shown. I drew & inked the final piece based on this distorted layout.

Here is the final inked piece, which I'm very happy with. Because this piece was going to be printed in black and white, I needed to make the piece 'read' without color. To make sense of the figures and their costumes, I focused on strong contour lines to define their outer form and a well distributed group of textures & grey densities. (I've talked about making grey patterns before to help define 2D spaces in my Inking Grey post.)   After finishing the piece, I developed some backstories for the various swordmasters and their swords and fighting styles. 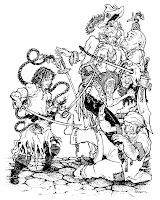 Here's a closer look at CPG and the Swordmasters:

Cursed Pirate Girl herself. I tried not to stray far from Jeremy's design of her 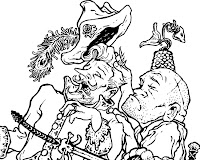 The Dandy & the Dwarf. 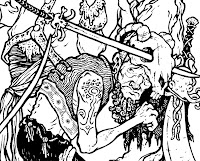 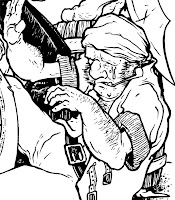 Watercolor Wednesday: In case you missed last week's Watercolor Wednesday pieces, here are all three in one image for a closer look. When I worked in the Ypsilanti antique store called Materials Unlimited I saw a lot of antique keys. Reading the Locke & Key series has awoken my appreciation for the beauty of keys both in their design & fabrication, but also in their symbolism. When I drew them out  (and I'd originally intended to draw more than 3) I added ribbons & labels so that I could 'write something clever' on each one. After the three were painted I gave they the attributes of Faith, Hope, & Charity and decided I didn't need to make another single key.

Tomorrow I'll post more of paintings in my online store.

Same. I was rather confused.

Link fixed. I guess Jeremy's domain name expired or was hacked...but it led to his blog anyhow, so I just gave a direct link instead