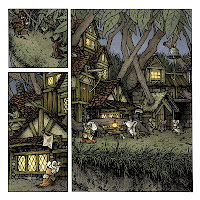 Reference Model: Upper Port Sumac:
As I described in Black Axe #2, Port Sumac is really 2 towns...the lower one down by the water and the upper one, high atop the bluff. For Black Axe #6, I had to show the upper town. I wanted to keep with the stacked, assembled hodge-podge look of lower Port Sumac, but without the emphisis on docks & ship parts. I decided that there are a few buildings that are exposed to the open air, but the rest of the city proper, is inside the grassy loam and accessed through one of the buildings like a gatehouse. 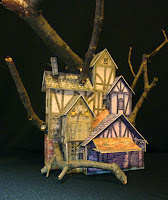 Instead of designing these from scratch, I resorted to buying several commercial papercraft models.I printed out a few copies of each, but instead of assembling them as instructed, I kitbashed them making them into new buildings that were not someone else's sole design and also gave that look of layered building over time. A few branches from my yard provided the reference for the bases of the Staghorn Sumac plants that form a canopy over the upper town. 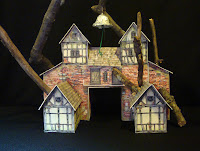 As I built the models, I came up with purposes for them. I needed a tavern for the scene, so that one was obvious, but the other two were thought of as I glued and taped and pasted. The one pictured to the left became the access to the rest of the city. The central opening leads to a secure door, and the bell above acts as a warning bell for the residents outside of the secure walls to get inside when predators are afoot. 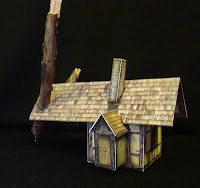 The smallest structure (which only appears in the bird's eye panel of the town) I figure is a gatehouse of sorts. Beyond it is the path by land that leads either down to lower Port Sumac or out into the wider territories. I show Celanawe coming from this direction in the first page of the town.
When it came time to draw each of these structures, I had to fill in the details myself. I didn't want the faces provided on the purchased models, and I needed to compensate for there the joints were from the kitbashing. 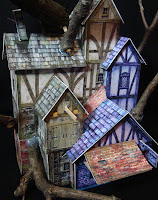 Ultimately, the opening setting for my Free Comic Book Day story for this year takes place here (in the tavern specifically) so this model came in handy...though I had to figure out what the inside of this Weasley-esque building would look like ...but that's a post for later in the year....

Watercolor Wednesday:
Just a single piece from last week's Watercolor Wednesday: The Angel of Death. My goal wasn't to make it look evil or particularly scary, more that what it represents is scary. The I took traits for the skull from horse & ram skulls. The white dots inside the cloak are meant to represent stars while outside of the angel the stippling is meant to look like it's casting off darkness.