Even though we still have issues of Legends of the Guard Vol 2 to be released, Today I'll walk through my cover for the hardcover collection of the second volume of Legends of the Guard. On the left is the final cover, with border and logo, and credits. But first I started with an idea for the cover of "a mouse peddling goods involved in a race against another peddler or a predator". It took some suggestions from friends and my wife Julia before it shaped into "two guardmice with a cart harnessed to a quail fleeing minks" 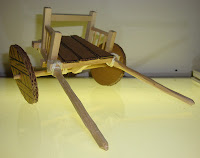 First up, I wanted to design the cart. I looked at a few medieval era cart drawings and recreations, but decided I'd rather scratch build something myself to get a feel for it. I used scrap basswood (they sell bags of it at the hardware store) to frame up the cart, lashed it together with string, and used some cardboard for the planks & wheels. I like building models this way (opposed to digitally) because it gives me a reason to push away from the computer, use my hands and engage my brain in not just a design sense, but a construction sense. How it's assembled is as important to me as what it looks like in the end.

I sketched out a quail, several minks, and the guard mice and assembled them in photoshop with a photo of the cart in the position I wanted. I struggled back and forth on what the minks should look like...should they wear clothes? if so, what type. I've only shown one mink before (Black Axe #4) and I drew it without clothing...but I felt these four needed needed them, not just to convey intelligence, but as a design choice to add some color and eye-lures to move the readers eye across the image better.

I printed out the above digital composite and taped it to the back of my Strathmore 300 series bristol. and then inked the piece on a lightbox using the printout as a guide. As you can see, I did a lot of the work in the ink. The mushrooms became so prominent because a fan tweeted to me that they'd like to see me draw more of them (they asked for morels, which I thought were too fussy with detail on this scale), so the guardmice now had a job of harvesting mushrooms.

The last step was to color the piece. I wanted to gain back the obvious 'up on one wheel' speed and fury the quail cart was going, so I added a color hold to all the inkwork behind the little ridge they are coming up over. Other than that, I colored this in my normal way, flatting in colors first and then using the dodge and burn tools to render each part and add texture. The overall palette is a bit more monochromatic that some of my past Mouse Guard work, but I'm aiming to be more subtle with color and not beat you over the head with it.

I'm really proud of this second round of Legends of the Guard. I think the contributors did a fantastic job. I hope you all enjoy the hardcover when it comes out later this year, and that you enjoy the one paragraph story that accompanies this cover.