Spotlight on Legends of the Guard creator: Rick Geary:

David Petersen: Rick, Thanks for doing the interview and for creating such a great story for Legends of the Guard! You are best known for your series of true-crime graphic novels set in the 19th and early 20th centuries. I know you do a tremendous amount of research for those real events, people, locations, and timelines. With Legends of the Guard, I asked you to create an original story. How often do you get to flex that writing muscle?

Rick Geary: I don't get to flex it very often, and I'm very grateful for this chance. In addition, the Legends story gave me the chance to do a little research into Medieval costumes and paraphernalia.

David: As fans of Mouse Guard have heard before, it was discovering one of your books in my local library that made me re-think doing comics. I saw all your hatching and stippling and patterns and felt a printmaking kinship to that inkwork that felt like things I did, but didn’t see in comics (so thank you!). Did your sense of linework and pattern-for-tone arrive through some natural development? or were there other artists or processes that influenced that look? 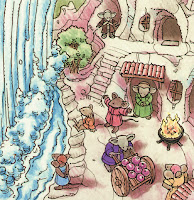 Rick: I don't believe that my ink style developed through any kind of conscious process. The most I can say is that I try for a certain tone or texture and I know it when I see it. The artists i consider my influences are too numerous to list completely. Edward Gorey, Robert Crumb, Gary Gianni, Tony Millionaire are some of the more contemporary ones. I also revere those pen-and-ink artists of the early 20th century: Charles Dana Gibson, Windsor McCay, Franklin Booth, Gluyas Williams, W. Heath Robinson. See? Too many to mention.

David: How did you start down the path of tackling true crimes as non-fiction comic stories?

Rick: I date my interest in true crime back to the early 70's in Wichita, Kansas, when a friend of mine, a former cop, lent me the complete case file of an unsolved murder from a few years earlier. I studied it in utter fascination, and it became the basis, years later, for my first published comic story. The idea of telling the stories of unsolved murders, laying out the clues and the various paths of investigation, stuck with me, and I did a few short stories for different comic anthology publications before landing with NBM in the late 80's and starting the Treasury series.

David: Did you have any concerns about trying to find an audience or publisher for your style of story and artwork in this comic marketplace dominated by cape and cowl superheroes?

Rick: I've been lucky in that I've worked with the same publisher (NBM) for over 20 years, and have been able to establish a little niche for myself in the true crime genre. Non-fiction comics are assuredly a small corner of publishing, but the genre has been growing and attracting readers in recent years, and I've had the opportunity to work on historical and biographical projects outside my Treasury of Murder series. 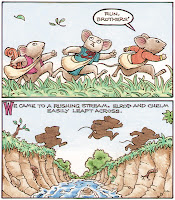 David: Your story for Legends of the Guard starts with an adventuresome young mouse exploring the tall grassy areas by streams near his home and discovering ‘treasures’. Did you have similar adventures growing up in Wichita, Kansas?

Rick: Hmm. I've never thought of that before. I enjoyed growing up in Kansas, and, though I've never been much of an outdoorsy person, I feel a sort of spiritual connection to the prairie. This has probably shown up in my stories in various ways, but it's not a conscious thing.

David: How do you start work on a story like this Legends story? Does it start with a script first, or do you thumbnail create the dialogue & narration later?

Rick: I always start with as complete a script as possible, and the visuals grow out of it. 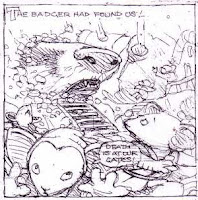 David: When you start on the artwork, what is your process and what materials are your tried and true favorites?

Rick: My method has become so standardized over the years that by now it's set in stone. I like to start with a pretty detailed pencil rough, and then I do a simple preliminary ink line over it with a thick-tipped pen, and then erase the pencils, and fill in the solid black areas with a Sharpie. Finally I do the finished ink work with a #0 or #1 Rapidograph pen.

David: Unlike your crime books (which are black and white) and your work on Gumby (which was colored digitally) this Legends of the Guard story is colored by you and by hand. Was there a difference of thought process while creating the linework knowing the story would be hand colored? What materials did you use for the color work (feel free to name brands) 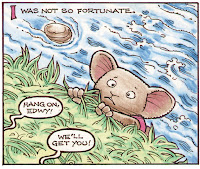 Rick: I always use Prismacolor Pencils for the (rare) color work I do. I'm not very confident with a brush, and the pencils give me the control I need, plus they can be blended to give a nice painterly effect. When I hand color a piece, that always changes the way I do the ink line over it. With the color, I try to supply the textures and shadings that I usually reserve for the linework.

David: Do you listen to or watch anything special while working?

Rick: Sometimes I listen to music (mostly Classical), sometimes I have the TV on, mostly old movies or old episodes of Criminal Minds or CSI Miami, mindless stuff that I don't have to pay strict attention to.

David: Thank you again Rick, I really appreciate it. It was a thrill for me when you agreed to do this Legends of the Guard story. So we can direct people to more of your work, where can people find out more about Rick Geary and your books?

Rick: Give a mention of my website, if you wouldn't mind: www.rickgeary.com

Great interview! Love the Q&A on Mr. Geary's art process and the tools he uses. I've seen Mr. Geary's work on comic shop shelves for quite some time but only recently picked them up, and now I am a proud supporter of his Kickster-funded "The Elwell Enigma." Hope to see more of Mr. Geary's work reach a ever-broader audience.