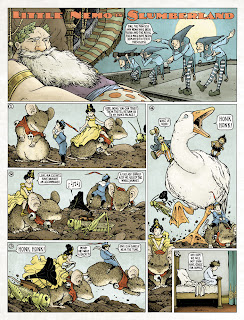 The folks at Locust Moon Comics are putting together a anthology tribute book of Little Nemo in Slumberland called Little Nemo: Dream Another Dream. It's got an incedible list of contributors and they were also kind enough to invite me to join. I felt honored to be asked to do something to tribute the work of Windsor McKay. He attended Michigan Normal School, which later became my alma matter: Eastern Michigan University. Each contributor was asked to do a single page, with the last panel being the traditional gag of Nemo awaking in the real world (usually his bedroom) Here is the process for my page (which is rather large at 16" x 21"!) 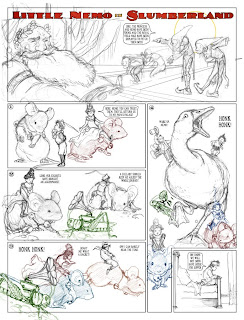 I knew for my story I wanted to include animals, and including mice (real looking mice, not Mouse Guard mice) was a given. I wanted to include other characters besides Nemo, like the princess, Flip, the Jungle Imp, and King Morpheus. But beyond that I had nothing. Until I was telling my nieces a silly story that was supposed to be dreamlike where I was chased by sheep with grasshoppers riding on their backs, who wielded slingshots...and that became the starting point of the story for the page that morphed into what you see here. The pencils were all done over the course of several pages in my sketchbooks. Characters and backgrounds (even in the same panel) may have been drawn separately but assembled in Photoshop in this grid template where I also added a stock Nemo logo and all of my text with a font I liked. 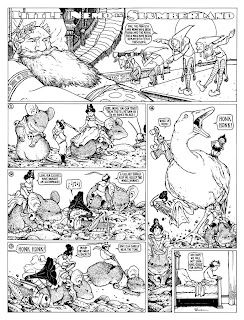 Because of the size, I printed each one of those panels out on it's own sheet of paper and taped them all back together and then onto the back of my 16" x 21" sheet of Strathmore 300 series bristol. On a lightbox I was able to see through the bristol and ink the page using my printed out pencils as a guide. I tried to leave a lot of open space and play with pattern more than texture, but as this was supposed to be a David Petersen Nemo and not just me trying to copy Windsor McKay, I added enough of my stippling and linework so that it felt very much like something I would have done. Even though I was working very large, I still opted to use a smaller Copic Multiliner that I normally use. While the page is lager, there are more panels than usual, and this page isn't getting reduced for printing...Locust Moon is publishing this book at the monster size of 16" x 21"!

The last step was to scan the inked piece (in 2 parts) and then color the whole thing. The coloring techniques I used were similar to all the other pieces I do, where I flat in base colors and them shade and highlight them suing the burn and dodge tools in Photoshop. Because I wanted to have a hybrid of coloring styles though (between the original Nemo strips and my work) I didn't render the piece as deeply as I normally would have leaving a lot of the colors more flat that usual. I added some paper texture and a faint halftone screen to get the piece to feel more in the right printing period for a Little Nemo story.

This book is going to be fantastic and is scheduled to be available in early 2014.

*6-23-14 UPDATE* The book is currently being Kickstarted HERE

Interesting as always, David. Thanks for this "behind the scene".