This year at conventions (and through my online store) I'll be offering a few new matted prints. For one of these, I did a new image of Saxon with a lantern. The print is 5" x 7" in a 8x10 mat. To the left you can see the finished art, but for today's blogpost, I'll go through the steps involved in creating the piece.

The original art is bigger than 5x7. I drew it larger to give myself a bit more breathing room while penciling and inking it, but knowing it was going to be printed smaller led me in decision making for the image. 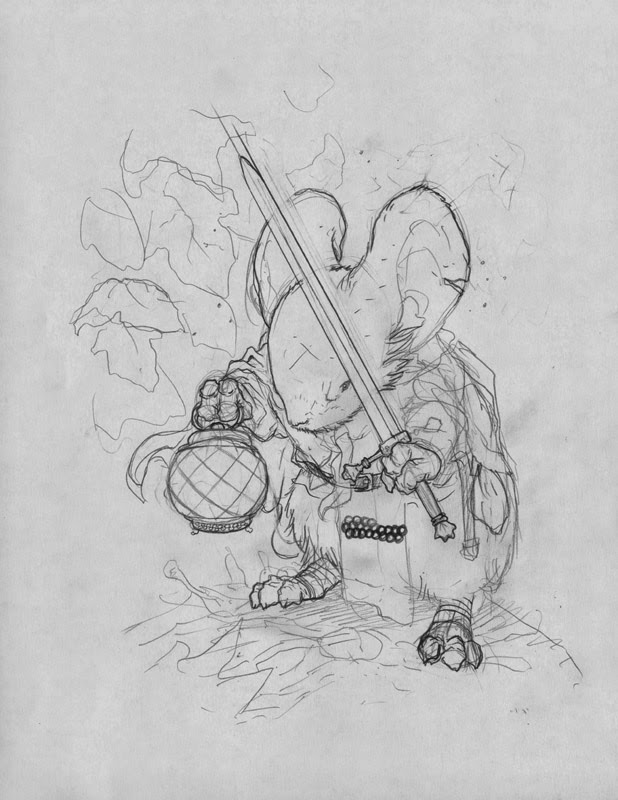 I started with the idea of a single character, in a non-action pose. I'd contemplated having it be a portrait, but decided that it would be more interesting to show full body and perhaps some suggestion of a setting. So, in pencil, I sketched out Saxon holding a sword and lantern. With the lantern, I thought could play up some interesting lighting effects. For the setting I sketched in some suggestion of leaves and a stick-strewn floor, but figured what it lacked in detail would be made more interesting with the glow coming from the lantern. 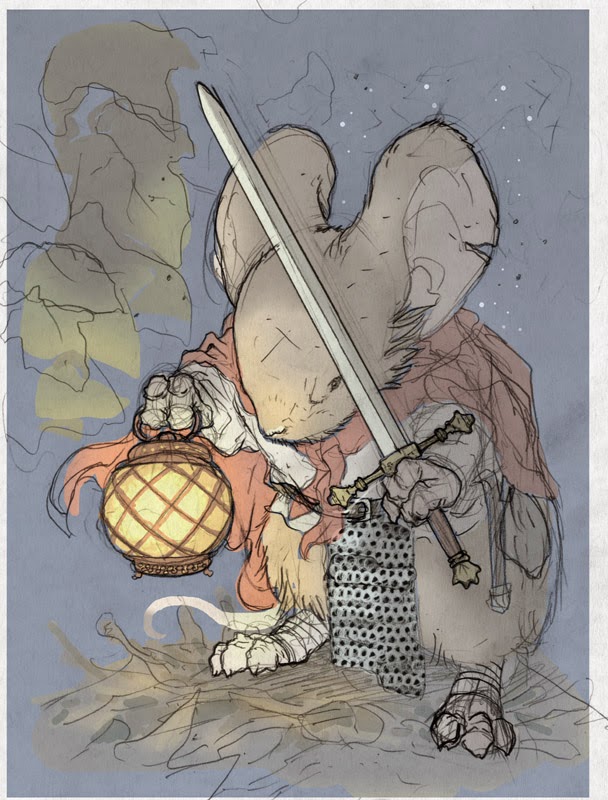 Because the lighting effects were going to be so important with this piece, I did a little photoshop underpainting on my pencil rough to work out if my idea would look the way I vaguely was imaging it. This step helped me think about how I wanted to handle the shadows...if I wanted to have them be painted in color details or values established by the inks. I opted for the colors to do the heavy lifting in this case other than a bit in the details on the floor where I less densely concentrated the black in the part that would be the most illuminated.

I printed out my Photoshop composite (I turned down the underpainting a bit so the pencil lines stood out more clearly) and taped it to the back of a sheet of Strathmore 300 series bristol. On my lightbox, I was able to see through the bristol to the printout so I could follow my pencil lines as I inked on the surface of the bristol. I used Copic Multiliners to ink with and tended to use the 0.7 and 0.3 nibs for most everything here. I do wish that in the same way I left open white areas in the lantern's range on the ground, I'd left some less dense highlights on the chainmail piece. Oh well.

After the inks were finished I scanned them into photoshop and started prepping my file for coloring. The most tedious part of this process is called "flatting" where flat (non-rendered) colors are laid in establishing what areas are which colors. It's basically an exercise in "stay in the lines" coloring.

Once the flats are established, it's easy to select parts to render and add effects to. For most of that I use the Dodge and Burn tools in Photoshop. They are used to lighten and darken whatever the base color you are going over. I use a stock Photoshop brush that has some texture while I do this to get the final look of the piece.

And here again is the finished piece. The prints are available in my online store or at my convention appearances.

Also, it was great running into you at C2E2 in Chicago!

(the old fat bearded guy that has bought four of your prints over the years)!

How long until these are available on the site? I am so eager to add to my collection.